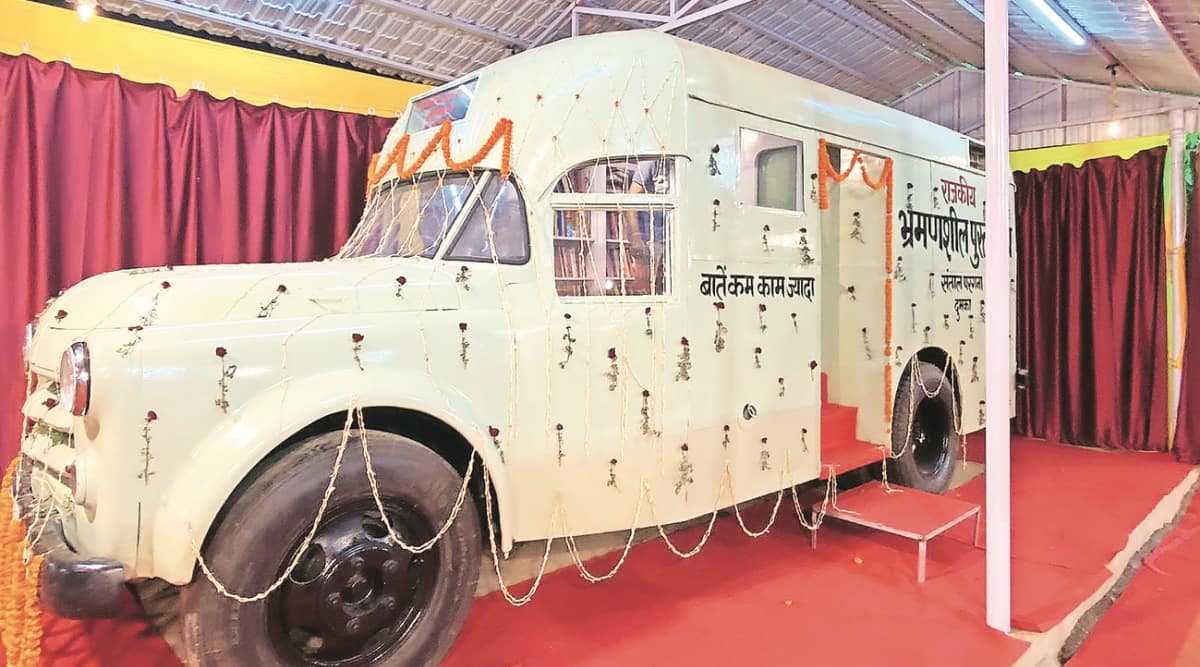 Is the adivasi community rude? does he follow a religion? does he have a global vision, and why is the Santhal rebellion, which took place before the 1857 revolt, left out of the mainstream story?

These are some of the questions that emerged during a discussion on “Tribal Literature: Present and Future” at the first State Library Literature Festival in Dumka district.

Other sessions included discussions on India’s wildlife crisis, wandering writers, among others.

The event centered on the renovation of “Rajkiya Bhramanshil Pustkalay (Library on Wheels)” built on a truck in 1956, which had traveled thousands of miles in remote areas of Jharkhand. Although no longer mobile, it has been renovated by Odisha-born poet and bookseller Akshay Bahibala, who travels with his “Walking Bookfairs” – a van full of books – to small towns to spark the spirit of reading. Originally, the “Bhrahmanshil Pustakalaya” traveled to Santhal Pargana police station districts: Dumka, Deoghar, Jamtara, Godda, Sahibganj and Pakur.

Tribal community writers such as writer-poet Anuj Lugun, winner of Sahitya Akademi Yuva Puraskar in 2019, and Mahadev Toppo, one of Jharkhand’s leading Adivasi literati, discussed how Adivasis are viewed differently .

The perception that the tribal community is backward and unfamiliar with the customs of the world is “unfounded”, Lugun said. “The Sosobonga, which are orally recited epics of the Adivasis, especially in the Mundas and Asur communities, tell us how there should be a balance between nature and humans,” he said.

Toppo said the culture of confinement has long existed within Adivasi communities. “The Adivasis don’t venture into the forests for a few months each year in an effort to protect baby animals, shrubs and growing plants. With such a view, how can an Adivasi person be called rude or ignorant? That’s the real challenge before writers and the next generation to bring this vision to the mainstream,” Toppo said.

Lugun said that an Adivasi writer from Khunti commented on World War I saying that “log hawa mein lad rahe hain, zameen ke liye (people fight in the air for the land)”. “It’s an incredible perspective from an Adivasi person and society, so the community is not aloof,” Lugun said.

He pointed out that in academia, little is said about the Adivasi knowledge system. “It is a problem if there is no Santhali school next to an English school. This means the direction we are going in policy making, knowledge of indigenous culture is not included,” he said.

Toppo seconded him and said the real challenge for upcoming writers who want to tell stories about Adivasi communities is to bring their views into the mainstream, which matters.

During the Q&A session, when asked why the Santhal Rebellion of 1855 – when two Santhal rebel leaders mobilized 60,000 people from the Santhal community and declared a rebellion against the East India Company – is not documented as it should be, and why new generations don’t write about it, Lugun said: “There was a mentality created that the Adivasis were barbarians and therefore there was no link established with the dominant society with the Adivasis. So their story, in a sense, was excluded.

Ranendra, director of the Ram Dayal Munda Tribal Welfare Research Institute in Jharkhand, who was present in the audience, however, said the local university never tried to document it and only some people from other states or some IAS agents were writing about it. “It is the failure of the universities, and also of our organization…that we receive the mainstream version of Delhi’s history. Currently, we are working to document the revolt of Santhal Hul or Phulo Jhano.

Explaining the difficulty he encountered in publishing two books on the Santhal Rebellion: “Two books, revisiting the Santhal Rebellion, were published in Dumka in 2018 and 2019. I was the editor and I was pained to realize that there was no thought process about who to write the history of the Adivasi and how it will be written — will the history be only that of the Adivasi, or will it be the story of an event?…”