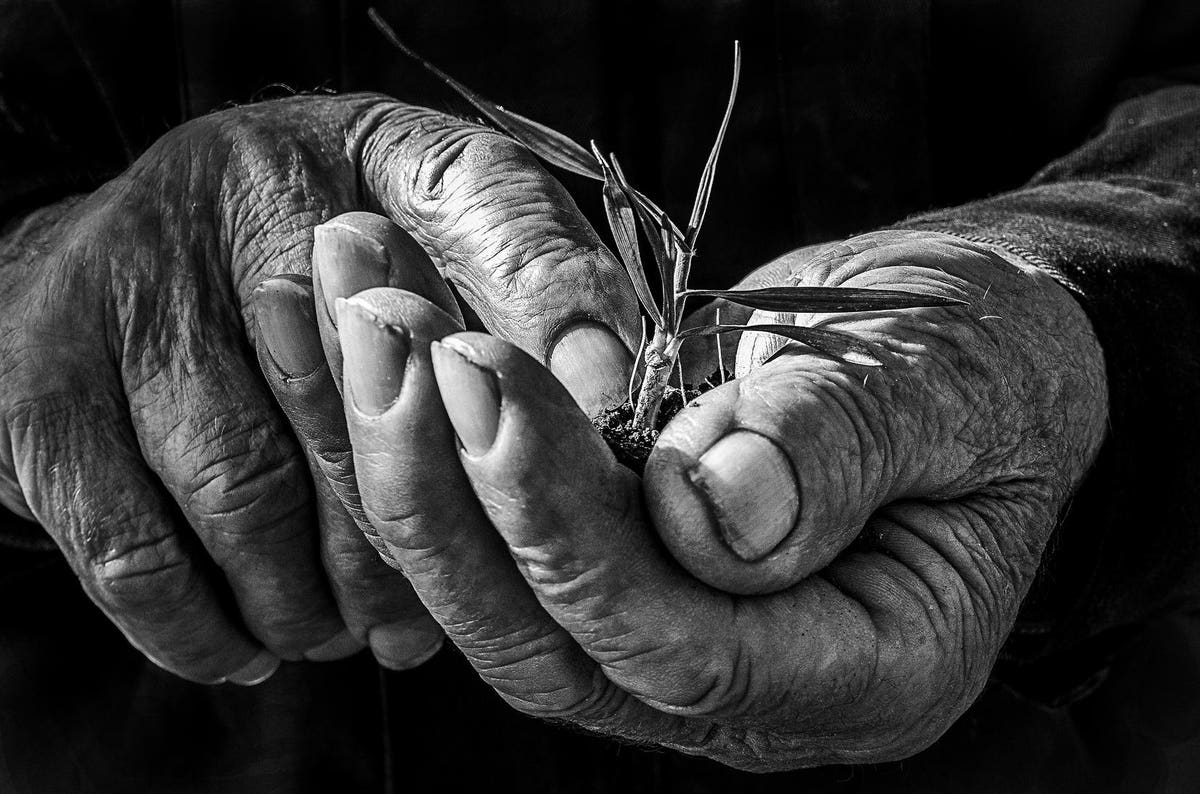 Crouching close to the ground, a sharp pain rose in his knees and lower back as thirsty hands reached out to old vines, about 50 years old, to harvest the few concentrated clusters of Tempranillo grapes that appeared to be hanging from a tree. skeleton of a bush plant with its thick, gnarled trunk. The sun beating down on his head forced his eyes to squint to combat the glare and dirt on his face and his hands softened the harsh effects of the sun as he plucked his precious fruit. His wife and children were there to help; his ten-year-old son, already a seasoned harvester by his skill and speed; his parents, who were of old age, still stubbornly insisted on helping, even though often they would only be able to walk through a few vines at the end of the day – each vine producing only a relatively small amount of fruit.

It’s not so amazing to think that a winemaker and his family would put such a backbreaking amount of work into their own vineyard that produced incredibly concentrated and well-balanced Tempranillo grapes, but the real shock is that, for decades, he went into making bulk wine.

Today, Ribera del Duero is a famous wine region in Spain with wine producers such as Vega Sicilia and Pesquera who have both helped to associate this wine region with exceptional red wines made from their Tempranillo grape (called Tinto Fino à Ribera del Duero) and in Cas de Vega Sicilia, a small amount of Bordeaux grape varieties mixed in some bottlings. Bodegas Vega Sicilia has a long history dating back to 1864, which is quite impressive considering that it survived the Spanish Civil War and 36 years of Franco’s dictatorship which on several occasions targeted Spaniards and citizens who were considered part of the demonized elite class. ; Coincidentally, Pesquera’s first vintage was 1975 – the year Franco died. Francisco Franco was a man who did not drink a lot of wine and is said to have no appreciation for it other than being an economic engine for Spain; this attitude has led to the destruction of many vineyards, especially those producing white wines, and a demand for an enormous amount of red wine in bulk; he even banned artisanal cheese made by small cheese makers.

And even though many old Tempranillo vines belonging to generations of wine growers in Ribera del Duero were spared by staying under the radar during Franco’s reign, they were forced to sell the fruits for bulk wine production; these precious bunches of grapes from these amazing old vines was thrown away with a bag of mixed grapes.

Spain as a whole is still grappling with its past which involved Franco as he is considered by some to be the man who brought order to chaotic Spain and ultimately brought the Spanish miracle that began in 1959 ( enormous growth of the Spanish economy) as opposed to others thinking of him as a ruthless dictator who was responsible for the death, torture and destruction of many Spanish families who still bear the scars of the Franco era. Iconic Spanish wine producer Miguel Torres explained how his own father, Miguel Torres senior, was dumped in one of Franco’s concentration camps and still today, due to a deal after Franco’s death to look only to the future, the number of people he killed and locked up is still not known as the full impact of his destructive reign has not been fully recognized by the Spanish government; such avoidance of trying to make amends for the past, unlike what Germany did with regard to the Nazi Party’s crimes against humanity, upheld Catalonia’s candidacy for independence because no other region suffered as much as Catalonia under Franco’s reign. Miguel Torres said people still lived in fear for decades after Franco’s death, as it was never clear if his way of governing had already faded – many believing that behind closed doors “Francoism” could still exist and therefore why many had remained silent about the atrocities. committed against their own family until recently.

And so it makes sense, given the history of Spain, that the family owners of such extraordinary old Tempranillo vines keep their heads down and give fruit so precious to make cheap bulk wine under the watchful eye of the government. But in 1957, ten winegrowers from Ribera del Duero, with vines that are half a century old, decided to form a cooperative that eventually took the name of Bodegas Viña Vilano in order to be able to pool their resources to produce and sell them- even their wines. Of course, it was still risky back then to do anything in this way considered to be creating a premium product and so they sold their wine as regular table wine which was not. just a few steps from the nationalized bulk wine.

But in 1999, with around 80 local winemakers being part of the cooperative, while seeing how well received other wine producers in Ribera del Duero had become for making fine wines, they invested in cellar equipment. at the cutting edge of technology and quality barrels to raise the quality of their wines while changing the name to simply Bodegas Vilano.

Today, the grandchildren of these producers still operate their own small plots of vineyards while producing more premium offerings ranging from Roble, Crianza and Reserva Tempranillo wines which are sold domestically, but a few ‘Signature bottlings. Of good wine, which express the special qualities of their old vines, have made their way to the American market: Terra Incognita and La Baraja.

Terra Incognita is a selection of the oldest vines among the members, vines ranging from 80 to over 100 years old – most of the vines of the original ten members were already 50 years old by the mid-1950s; and La Baraja, which is the only blended wine from Bodegas Vilano because all their red wines are 100% Tempranillo like Terra Incognita, is a blend of 75% Tempranillo from 70-year-old vines and 15% Cabernet Sauvignon and 10% Merlot from vines between 35 and 37 years old – La Baraja comes from a single vineyard called La Baraja and is therefore only produced in the best years for that vineyard.

The easiest thing for a leader to do is to blame a particular group – a strategy that has been used repeatedly throughout history with tragic consequences; contrasts with great leaders who take the difficult path of doing what is right for the country as a whole, which involves taking full responsibility for the ups and downs of people’s livelihoods, even when the reality of life is that many things, like national economies, cannot be controlled by one person or even a government – certain cycles of life are beyond direct human control.

And over time, the benefits of these emblematic producers of the Ribera del Duero materialize; playing with their money and bearing stressful overhead costs, they have made the old vines of these family farmers appreciated for the great wines they are capable of producing. Many current members of Bodegas Vilano know that their grandparents could never have imagined that their vines would be so respected nationally, let alone globally.

And so when a grandson goes into the vineyards like his grandparents, it’s always the same sun that beats down on his head, the same dirt that covers his face and hands and the same vines that come from his thicken, more gnarled trunks over time but there is a big difference – instead of being overwhelming work with no future, no hope and no value, it is now a rewarding task to be a part owner of a business that transforms the long cherished grapes of your grandparents into an exciting fine wine that is appreciated as something rare and special around the world.

2019 Bodegas Vilano, ‘Terra Incognita’, Ribera del Duero, Spain: 100% Tempranillo (called Tinto Fino in Ribera del Duero) ranging from vines from 80 to over 100 years old. Rich, dark flavors of black fruits and hints of cocoa powder with a fleshy entry accompanied by a finer tannic structure on the mid-palate and great precision on the finish with a note of raised orange peel.

2016 Bodegas Vilano, ‘La Baraja’, Vignoble La Baraja, Ribera del Duero, Spain: 75% Tempranillo (called Tinto Fino in Ribera del Duero) from 70-year-old vines and 15% Cabernet and 10% Merlot from 35 to 37 -vines one year old. A nice blend of blackberry and red cherry with an additional complexity of fresh leather and crushed rock aromas in the background with lacy tannins that weave a good concentration of fruit on the palate; an elegant and powerful wine at the same time. Since La Baraja comes from a single vineyard called La Baraja, it is only produced in the best years for that vineyard and therefore the next vintage will not be until the 2019 release after aging.