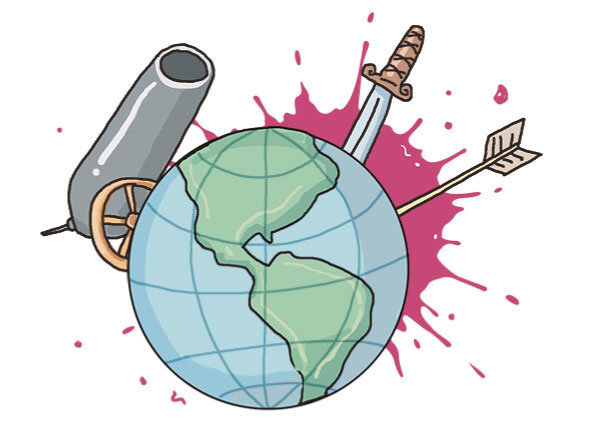 Who is the most barbaric? : The DONG-A ILBO

Crane Brinton (1898-1968), an American historian, once pointed out that modern people regard the ancients as barbarians while modern people are those who detonate an atomic bomb without batting an eyelid. If one takes issue with this statement that Professor Brinton made such a remark in the Cold War era and that modern people oppose the use of the nuclear bomb, I would encourage the person to reflect on the random bombings that took place during the World War. II, the Vietnam War, and in Ukraine right now.

Brinton’s intention was to criticize the illusions of modern people – so perhaps we should also consider our prejudices against the lives of the ancients. I wonder who or where the illusion began that the life of the ancient tribes was simple and peaceful. Ever since the dawn of the Age of Discovery, European countries have maintained that it is the responsibility of civilized nations to grant the inhabitants of the underdeveloped part of the world the benefits of civilization and thus free them from the ways of uncivilized life. I do not intend to disagree with this argument.

Yet such a theory created by the civilized nation has often been exploited to support imperialist rule, which Korea has fallen victim to throughout its history. Perhaps the concept of “the naivety of the ancient world untainted by civilization and capitalism” emerged to refute the ethnological prejudices of the civilized, questioning whether ancient peoples had a righteous soul for them – a theme presented in the movie “The Mission”.

Yet Karl Marx, who criticized the abuse of capital, also opposed the idea of ​​admiring primitive culture. The German philosopher saw antiquity as a society dominated by power and violence, not pure and romantic.

One of the scenes in the film where the army of the conqueror from outside destroys the peaceful world is also only an imagination of the civilized people. Even before foreign power, armed with the new weapons of the civilized world, burst in, cruelty and destruction already existed in the land of the ancients. There was simply no way to save them.

So which is the most barbaric? The question itself can render useless. The human has always been two sides in them. We become that reasonable angel when the matter is irrelevant to our own interest. However, when it comes to our best interests, we take another side of ourselves to use anything as an excuse to justify our actions. We must remember that civilization has given us the ability to send food and medicine to those suffering from starvation and poverty, as well as to deploy ruthless and destructive drones and missile attacks on the same earth.