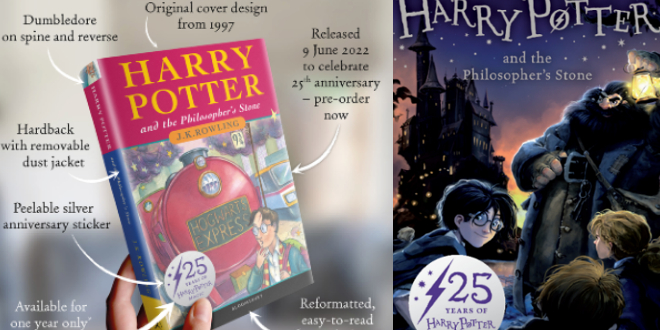 2022: a magical trip to the United Kingdom to celebrate the 25th anniversary of
one of the greatest children’s books in the world

Harry Potter and the Philosopher’s Stone by famous JK Rowling 25 years of printing in 2022 in the UK and Bloomsbury Children’s Books will celebrate throughout the year in magical style, alongside the release of two special limited editions.

Harry Potter and the Philosopher’s Stone is the first unforgettable novel that set Harry Potter’s fate in motion. This magical story has inspired new generations of readers since it was published in the UK on June 26, 1997 – which has become an unprecedented editorial phenomenon beloved by fans around the world. And on Sunday, June 26, 2022, Harry Potter turns the page to celebrate 25 years of printing!

From the idea born by JK Rowling during a train trip in 1990, with a first hardcover edition of only 500 copies, the series sold 500 million pounds worldwide in more than 80 languages, inspiring a major film franchise, haunting theatrical production and much more. Since Harry Potter was first transported from King’s Cross Station to Platform Nine and Three Quarters,
his incredible adventures have left a unique and lasting mark on popular culture.

Bloomsbury 2022 celebrations start on Thursday, January 20, 2022, featuring an updated classic silver anniversary paperback edition of Harry Potter and the Philosopher’s Stone, featuring the cover artwork by Jonny Duddle, sporting a flash silver foil livery. This beloved classic edition has been refreshed and updated, with additional fun content to keep young readers entertained as they begin their journey through the stories.

Thursday, June 9 sees the release of a stunning commemorative hardcover edition of JK Rowling’s debut novel with the original and iconic 1997 cover image of The Hogwarts Express, illustrated by Thomas Taylor. This very special limited edition will include new exclusive bonuses that will bring back countless memories to nostalgic fans while inviting a new generation of readers to share the excitement and magic of the latest. 25 year.

Other dates for Harry Potter and the Philosopher’s Stone travel in 2022 includes a busy day around the world on Thursday 3 February, in what will be the biggest and the best Harry Potter Book Night with the perfect birthday theme of Magical journeys. Bloomsbury created an exclusive Event Pack (available now for download) full of party tips, enchanting games, spellbinding activities, crafts, recipes, costumes, quizzes[,] and easy-to-make design ideas for all your favorite modes of transportation inspired by Harry Potter stories: like the Hogwarts Express, brooms or maybe even a Thestral for witches, wizards and muggles to take on a journey Magic !

Thursday 3 February will also see the launch of Bloomsbury’s exciting anniversary campaign with The National Literacy Trust – Miles of Magic: The Harry Potter Book Relay and the Harry Potter Reading Challenge. This ambitious partnership will see a single copy of the classic paperback edition of the Silver Anniversary of Harry Potter and the Philosopher’s Stone traveling to 25 UK primary schools between February and June. The book relay will start on Harry Potter Book Night, at the Manchester Central Library with three local primary schools participating in a magical day of Harry Potter activities. This special book will then travel in a ‘relay style’ covering ‘Miles of Magic’ as it travels from school to school, bringing together children and teachers â€[] memories of reading Harry Potter for the very first time on postcards which will then be part of birthday celebrations in June.

The second element of the partnership, the Harry Potter Reading Challenge, will invite schools across the UK to participate in their own Harry Potter reading adventure, complete with a downloadable defimeter map that will illustrate the key points of a magical reading journey which are also plotted as stages in a reading log. As part of this, Bloomsbury will donate 800 copies of Jonny Duddle’s anniversary edition to schools through the NLT Young Readers program.

The happy annual World Book Day (WBD) are also running[s] 25 in 2022 – therefore WBD and Harry Potter and the Philosopher’s Stone join forces for a double celebration on the occasion of World Book Day on Thursday, March 3, 2022. More to reveal in the New Year.

And there is more to come in fall 2022 with more magic Harry Potter and the Philosopher’s Stone activity to be announced.