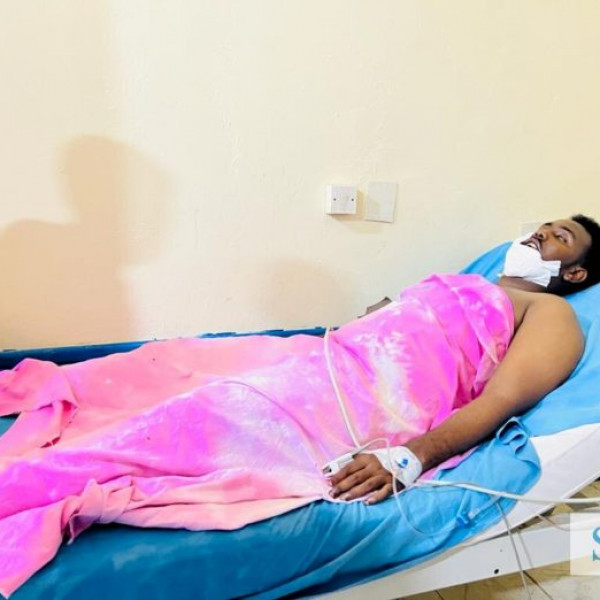 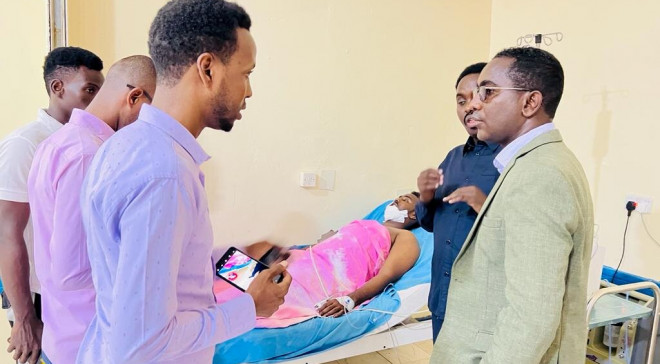 No explanation was provided on the circumstances of the shooting.

The cameraman was part of a group of local journalists covering the attack on the Hayat Hotel from the KM4 junction since Friday. Colleagues who witnessed the shooting said a group of Turkish-trained Haramcad police officers were standing nearby when one of them shot the journalist. No explanation was provided on the circumstances of the shooting. He was rushed to hospital where doctors performed emergency surgery on his cheek.

SJS Secretary General Abdalle Ahmed Mumin and other media directors visited the injured journalist in hospital as a sign of solidarity. SJS and SOMA wish him a speedy recovery.

“We have just visited our colleague, Ahmed Omar Nur, who was shot and injured by Haramcad Police while covering the attack on Hayat Hotel at KM4 junction this morning. He was shot by a bullet that hit the ground before entering his cheek through his mouth. Doctors told us that they had successfully completed surgery and he is in the recovery ward,” said Abdalle Ahmed Mumin, Secretary General of the Somali Journalists Syndicate (SJS).

“We also contacted the police to demand accountability and were told that two Haramcad police officers had been arrested in connection with the shooting. We need urgent action, not words. We ask the judicial police to investigate and explain why our colleague was shot when he was clearly identifiable as a journalist with his camera and was carrying his press card and no shooting took place at this time and in this place.

SJS and SOMA call on the authorities of the Federal Government of Somalia to launch a prompt, thorough, transparent, independent and impartial investigation into the circumstances of the assassination of M24 TV journalist, Ahmed Omar Nur.

“We are shocked that once again Somali police have shot a wounded journalist in Mogadishu. We wish him a speedy recovery,” said Mohamed Osman Makaran, Secretary General of the Somali Media Association (SOMA).

“We had previously documented incidents of police shootings at journalists, including the death of SBS TV journalist Abdirizak Qasim Iman in 2018. Not all of these incidents have been resolved. Somali government authorities must investigate this shooting and bring justice to our colleague Ahmed Omar Nur and bring the arrested Haramcad officers to justice.