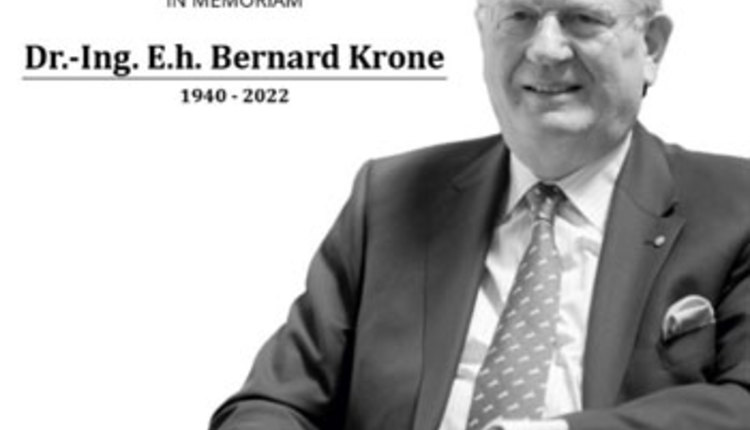 The longtime owner of the Krone Group, Dr. Bernard Krone, has passed away.

It is with deep sadness that we inform you of the death of the long-time owner of the KRONE Group, Dr.-Ing. Eh Bernard Krone, after a short serious illness in Spelle, Emsland, on October 14, 2022 at the age of 82.

His passing is not only mourned by his family and loved ones and over 7,000 employees, but also by the international agricultural engineering and European commercial vehicle industry, which passionate family entrepreneur Dr. Bernard Krone, has shaped decisively over his many years of work. Being in close contact with customers – the personal interaction with people in the industries – has always been particularly close to his heart.

Dr. Bernard Krone was considered a visionary man of action. His life motto was inspired by the philosopher Dante Alighieri: “One waits for times to change, the other seizes them and acts”, and he acted – naturally. He continuously developed the company and made revolutionary decisions to diversify the business: in addition to entering the commercial vehicle sector, he implemented, among other things, self-propelled technology in agricultural engineering and specialized the Krone company in forage harvesting technology. He thus shaped the group for many decades, developed products and set the course before officially retiring from operational activities in 2010 and handing over the helm to his son Bernard Krone. With the early arrangement of the company’s succession to the benefit of the Krone Group, he once again showed entrepreneurial foresight. His most important advice to his successor: “Always remain the blacksmith of Emsland as your great-grandfather, your grandfather and your father.

Although the death of Dr Bernard Krone leaves a deep gash in the soul of the company, the values ​​lived by the far-sighted but down-to-earth Emslander form the basis of the company’s enduring success in this day. Honesty, reliability, righteousness – these are the terms by which many esteemed companions describe him. It has always been important for him to be a role model and to actively live this role. The family, the entire management of the company and all the employees will continue his life’s work with commitment for generations to come.

If we come into contact with aliens, the biggest danger will be our politicians, say scientists