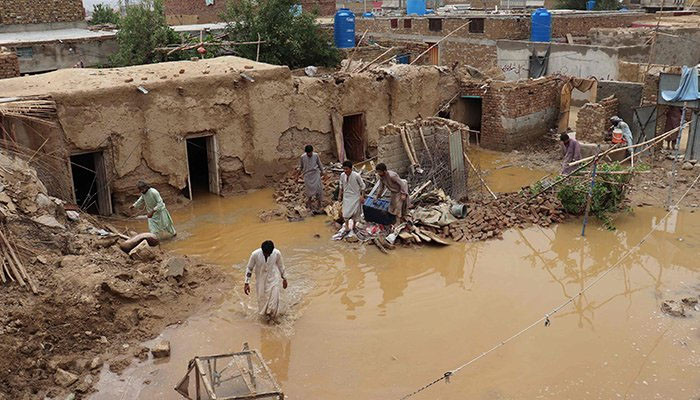 We are at the end of October in the fall of 2014. This time and the landscapes are still engraved in my memory. The place is Trimmu Barrage in Jhang district in central Punjab. Here, two great rivers of the Indus river system, the Chenab and the Jhelum, merge in a majestic and spectacular way. There is something surreal about seeing two bodies of water, both distinct in color and appearance, merge under the bright sunshine to produce a new unity.

Additionally, there is a unique mystical element to rivers that has fascinated poets, philosophers, and thinkers throughout history. If I remember correctly, it was the ancient, pre-Socratic Greek philosopher Heraclitus who said that “you cannot walk the same river twice” – an analogy for the constant flow and change that characterizes existence.

But given the large-scale flooding in the country this year, it feels like we’re plunging into the same river again and again. In 2014, I was in Trimmu as part of the flood relief and rehabilitation program that my employer was undertaking at the time. Also that year, floods had ravaged most of the country, with intense monsoon rains causing the river system to overflow. Such floods have become all too common for Pakistan, as over the past decade a major flood has hit the country every two years.

This year’s rain-triggered flooding came after one of the hottest summers on record in the subcontinent. There is no denying that extreme weather events are becoming more frequent in our part of the world. As to the reason behind this, the scientific evidence is nearly unanimous on how extreme weather events are a symptom of unprecedented human-induced climate change, especially since the advent of industrialization in the so- saying “developed world” and more. recently in emerging Asian economies.

It is indisputable that countries like Pakistan have been disproportionately affected by the ravages of climate change. If carbon dioxide emissions were to be considered a proxy indicator of human activity directly contributing to climate change, Pakistan’s cumulative share of historical carbon dioxide emissions is only 0.3%. Yet the adverse effects of climate change in the form of floods and other extreme weather events in countries like Pakistan are considerable. It could then perhaps be pointed out that we Pakistanis are paying for the mistakes of other more advanced industrialized economies. Recently, many commentators from the mainstream Global South have also called for “reparations” that industrialized countries should provide to countries that did not cause this climate catastrophe, but are still among the countries that are disproportionately affected.

Such demands, cries and clamors – call them what you will – fell on deaf ears. While this is true in principle, I find these repair requests problematic. Even if one were to abandon for once the terribly impractical modalities associated with these reparations, the demands also reflect a particular psychology of self-victimization that has prevailed in formerly colonized societies for some time now. Lounge commentators and casual observers like to blame all their existing illnesses on the history of colonization and imperial rule.

It is indeed true that the imperial history of colonization is a history of extractive exploitation and repression. But by blaming all current problems on the colonial past, such commentators are able to abdicate their own responsibilities.

This victim-game psychology then permeates hallways, boardrooms, and more recently, Twitter feeds, and eventually forms a general pattern of denial, victim-play, and inaction among global citizens in development. I believe these current calls for climate change reparations stem from such an attitude.

The fact is that we are all living in a new reality and how we respond to this unprecedented challenge will define our trajectory as a country, and more generally as a species. A valid question to ask here is: if we were to be in the place of today’s industrialized countries in the past, would we have taken a different course of action? The answer is quite clear, as the recent industrial excesses of China and India have shown, emerging economies are taking a similar path.

In the literature on climate change adaptation strategies, we often hear the buzzwords ‘resilience’ and ‘adaptation’. If we were to focus on the question of making our population more resilient to climate change, there are countless theories, models and philosophies. Yet in my years of working with the victims of climate change, there is only one real strategy that works to increase a population’s resilience – and that is increasing their income facilitated by increased economic opportunities. All other strategies are just peripheral band-aids and nothing more.

That said, this presents both a dilemma and a public policy challenge for us. The question remains – and which should keep all policy makers perpetually awake at night – whether it is possible to raise average incomes without causing more damage to the environment.

And if the recent examples of India and China are any indication, it is a seemingly insurmountable task, which will force us to rethink the way we work, live, produce and consume. Both countries have experienced economic growth and lifted a significant portion of their population out of poverty, but this has come at the cost of an increased carbon footprint and environmental degradation.

Now let’s come to the concept of adaptation to climate change, which is a more complex and proactive concept as a whole. Yet at the heart of it is the call to radically change the way we lead our lives on the micro and macro levels – something we will discuss in detail in another place and at another time.

Extreme weather events induced by climate change are the new reality of our time. Something we have to buckle up and get used to. Rather than playing the typical victim and calling for reparations that will never come, we must take charge of our own destiny.

A good place to start would be to introspect and innovate and ultimately answer the question of whether we can increase people’s economic well-being without industrializing in a way that wreaks havoc on the environment. This would run counter to conventional economic theory on the stages of growth. It’s a colossal request, but maybe it’s in us.

The author is a research fellow at PIDE, Islamabad and holds a master’s degree from Cornell University, USA.