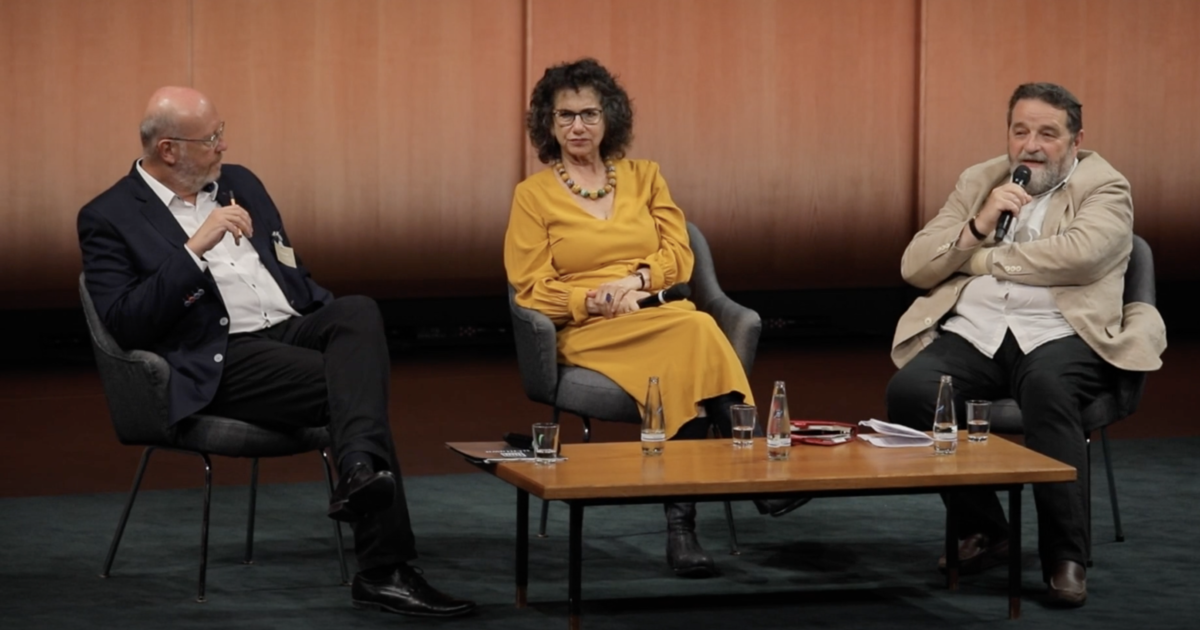 The challenge of defending memory in Germany

“Hijacking Memory: The Holocaust and the New Right”— a conference in Berlin June 9-12 hosted by philosopher Susan Neiman, writer and researcher Emily Dische-Becker and historian Stefanie Schüler-Springorum — began with an anxious tone. On opening day, the German liberal daily Suddeutsche Zeitung reported that the conference center Haus der Kulturen der Welt (HKW) had taken security measures. But it wasn’t just the threat of physical disruption that loomed. Neiman, who heads the Einstein Forum, a cultural and intellectual organization founded after German reunification, joked during her speech about the risk of her comments being taken out of context and used against her, the Einstein Forum and the conference.

Although Neiman seemed to relish his acts of subtle transgression, the fear was real. Before the start of the conference, she had already generated a buzz on social networks. German Defense Groups of Israel tweeted this Neiman—an Israeli citizen and former professor at Tel Aviv University – was trying to advance a pro-BDS agenda, and implied that the conference facilitated the “relativizationof the Holocaust, long a major taboo in Germany where, in the official state Errinerungskultur, or “culture of memory”, the Holocaust is presented as the unequaled instantiation of evil in the history of the ‘humanity. “Relativization” was once an accusation leveled against conservative German historians such as Ernst Nolte, whose works equating Nazism with Bolshevism was widely seen as a minimization of German war crimes; in recent years, postcolonial theorists like Achille Mbembe and Palestinian scholars such as Saed Atshan bore the brunt of the accusation of having juxtaposed colonial violence with Nazi violence.

The ‘Hijacking Memory’ conference aimed to bring together a range of academics, journalists and activists to discuss what its organizers called a ‘troubling development’: Around the world, from Hungary to Israel to Britain and the US, the right and xenophobia Groups have attempted to position themselves as Holocaust remembrance advocates, even as they often whitewash European collaboration with the Nazis and pursue an anti-Holocaust policy. – racist and xenophobic migrants. Often, they also emphasize their ardent support for Israeli policies in order to refute accusations of anti-Semitism. In Germany, for example, where the far right once rejected civic beliefs about the Holocaust, representatives of the right-wing populist Alternative für Deutschland (AfD) party are now signing anti-BDS resolutions and cultivate connections with the Netanyahu family. Against the backdrop of growing intolerance in Germany for criticism of Israel and the shrinking space for Palestinian political expression, conference organizers asked: how could this phenomenon be challenged?

Yet, while reaction to the conference slowly mounted in the weeks following its close – not only from within the confines of German opinion where hostility was anticipated, but from conference participants themselves – same – it seems that opponents of the New Right may be too divided to coordinate. answer. After Palestinian scholar Tareq Baconi argued in a speech that European guilt for the Holocaust should not be used as a pretext to deny Palestinian freedom and equality, Polish historian Jan Grabowski and journalist Konstanty Gebert denounced Baconi from the conference stage and then in the German press, accusing him of anti-Semitism. This division reflects the reality that many of those who oppose the revision of Holocaust history by right-wing European governments often do not dispute the idea that Israel’s continued existence as a state Jewishness is a necessary reward for the Holocaust – even if it means denying Palestinians their basic rights indefinitely. However, a conference intended to address the instrumentalization of anti-Semitism risks becoming a lesson on the unfolding of such a process.

The second night of “misappropriation of memory,” Hannah Tzuberi, a scholar of Jewish and Islamic studies based in Berlin, argued in a talk that Europe’s incomplete process of coming to terms with its past – what the Germans call vergangenheitsbewältigung – had led Europeans to project their own guilt for the Holocaust onto the Palestinians. In the European imaginary of the 21st century, Tzuberi said, Germans and other Europeans had, through their support for Israel, absolved themselves of their guilt for the Holocaust: it is now the Palestinians, resisting Zionist colonization in Palestine, who became the Nazis. “The birth of a morally improved German political system, made up of citizens who have learned their lesson and now wish to protect what their ancestors failed to protect, will [along] with a listing of Palestinians as perpetrators and Jews as their victims,” Tzuberi said.

Indeed, in recent years, this impulse has translated directly into the policy of the German government. The country adopted a series of measures bolstering support for Israel and cracking down on criticism of Israeli policies. In 2018, the Bundestag, the German federal parliament, vote declare the existence of Israel as part of Germany’s national interest. In 2019, the parliament past a non-binding resolution – co-sponsored by a range of parties including the right-wing Christian Democratic Union (CDU) and the AfD – which called the BDS movement anti-Semitic.

Palestinian activists and journalists as well as Israeli anti-Zionist artists and activists have faced a wave of repression as a result of these measures. Many lost their jobs or saw their public appearances canceled and their funded projects. Palestinian activists accuse the German culture of zealous support for Israel of having turned into a kind anti-Palestinian racism. And such animosity is not confined to the German center or right. The German left has long featured the idiosyncratic proponents of an ideological bent known as “anti-Deutsche” (literally, “anti-German”), which merges anti-fascist militancy – black hoods and red and black banners – with ardent Zionism and the glorification of the Israel Defense Forces.

The combination of state and grassroots hostility to Palestine solidarity activism means that conversations now common on the American left remain almost unheard of in the German context. On the second day of the conference, for example, Jewish currents editor Peter Beinart debated with former 1960s student leader Daniel Cohn-Bendit about the BDS movement, the ethics of armed struggle and the feasibility of a two-state solution. The conversation was lively but familiar by American standards; still German observersincluding an Suddeutsche Zeitung journalist, expressed surprise that they managed to speak without accusing each other of anti-Semitism. “I don’t think there’s ever been such an open conversation about [Israel/Palestine] on a German public stage before,” Neiman told the crowd after the discussion — his remark testifies to how dramatically the public discussion of Israel in Germany has become circumscribed.

The limits of German discourse will not take long to suddenly appear. On the third day of the conference, Palestinian international relations scholar Tareq Baconi directly addressed the repression of Palestinian activism in a speech titled “Palestine and the Politics of Holocaust Remembrance”. Baconi began by explaining how the International Holocaust Remembrance Alliance (IHRA) definition of anti-Semitism, adopted by the United States under Trump and by governments across Europe, has become a tool to end the criticism of Israel. While Israel’s advocates have long leveled the accusation of anti-Semitism at Israel’s critics, Baconi observed that the IHRA and its widespread adoption represented a new phase, which he dubbed “Hasbara 3.0.” (“Hasbara” literally means “explanation” and is a term for Israeli propaganda.) The endgame of this strategy, according to Baconi, was not simply to refute Israel’s criticisms, but to deem them illegal. Even as Israel gave up any pretense of moving toward territorial compromise, groups aligned with the Israeli government, often in partnership with right-wing political parties, managed to frame even by naming apartheid the reality of a state for what it is. as an attack on the Jews.

There is no doubt that Baconi’s speech stood out. For five days and dozens of lectures, he was the only scheduled Palestinian speaker, and he spoke consciously about the need to bring the Palestinian perspective into a space focused on the abuses of Holocaust memory – “to to inject, for clarity and for the sake of moral and political challenge, our own narrative directly into this space. It was the only one to offer an implicit critique of the Judeo-centric nature of the conference itself. For too long, said Baconi, Palestinians have been “nothing more than a backdrop, silent at best, a nuisance at worst,” in conversations about anti-Semitism and Israel/Palestine. “I sometimes find myself thinking that the Palestinians are just the canvas on which Jewish psychodramas are played out,” he said.

To remedy this, Baconi proposed shifting the focus to the Palestinians themselves. The Palestinians did not choose the Jews as their opponents, Baconi said: “Let’s be clear: if the Palestinians were colonized by a non-Jewish state, we would still resist our colonization. Yet European guilt for the Holocaust has made it impossible to acknowledge that Israel’s founding resulted in the Palestinian Nakba; the insistence on the exceptionality of one atrocity erased, in practice, the memory of another atrocity. In the German context, even the mere presence of Palestinians as political actors, bearing witness as survivors of the destruction of Palestinian society that the founding of Israel entailed, has come to be seen as prima facie antisemitic. It didn’t take long for the response to Baconi’s speech to illustrate his point.

We need to solve this politician-induced cost of living crisis