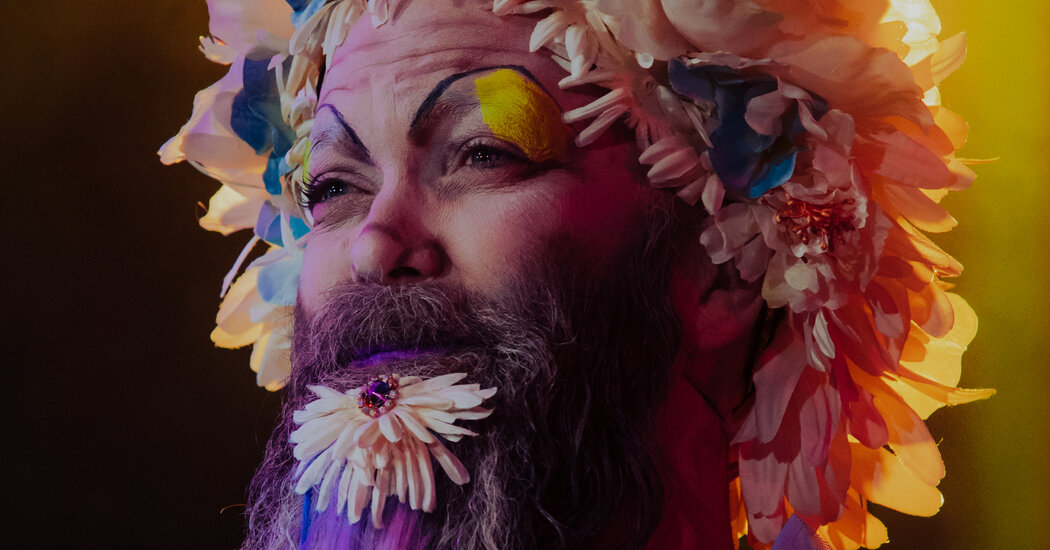 Taylor Mac explores the philosophy of the Hang

What kind of party do you throw when you’re about to die? This is a particularly morbid question these days. But in “The Hang”, a new opera by performer Taylor Mac, the answer lies in philosophy and decor in equal measure.

The show, written with composer Matt Ray, chronicles the death of Socrates, who after being found guilty of corrupting the youth of Athens and sentenced to death by hemlock, spent his final hours talking about virtue with his friends. And a few songs in a recent production review at HERE Arts Center in midtown Manhattan, Mac – dressed in a purple tulle dress and an appropriate Socratic pandemic beard – began dragging giant bean bag chairs as a bar took shape in the corner of the stage.

It’s sort of a credo for Mac, whose work, including the epic “A 24-Decade History of Popular Music,” celebrates community and connection through a radical queer lens. And “The Hang,” created with some of Mac’s longtime collaborators, brings those themes back to the stage, in a spooky, hard-to-summon mix.

The show, which lasts 105 minutes with no intermission, takes the form of a gathering of “radical fairies”, who come together every year to mourn and re-enact the death of Socrates. There’s plenty of wailing, but also some weird antics, ancient Greek jokes, a comedic Noël Coward-style monologue, and a meditative number sung in a toilet.

And yes, we are talking about virtue – not in the sense of starchy purity (to say the least), but the Socratic sense of knowledge and relentless questioning, which for Mac is not just a question of logical argument, or even of words.

“One angle I wanted to go with on this show was to say there was more,” Mac said in a video interview. “Socratic questions can also be expressed physically, aesthetically and sonically.”

“The Hang,” which begins previews Thursday and runs through Feb. 20, may seem like a response to the pandemic, which not only shut down the theater but also, for a time, most unreleased releases. virtual. (The opera, which is produced by HERE, was originally scheduled to premiere earlier this month as part of the Prototype Festival, which was canceled due to the surge of Omicron.)

But Mac said the idea began to germinate years ago, as a “palace cleanser” after “A 24-Decade History of Popular Music,” a sprawling meditation on American history through 246 songs, which Mac performed as a 24-hour marathon in 2016. at St. Ann’s Warehouse in Brooklyn.

The initial impulse was to do a solo play based on Plato’s “Apology”, an account of the trial of Socrates, which Mac had recently read for the first time. “I wanted to do something simple,” Mac said. “And it was also so relevant to what was going on – the conversation about justice and virtue, and how those things were manipulated to end curiosity.”

But nothing with Mac, a self-proclaimed maximalist, is kept simple or small. By the end of 2019, “The Hang” had become an ensemble piece, and he sent a draft script to Ray, who had arranged the songs in “A 24-Decade History.”

Ray, who has been playing jazz since he was a child, said his sonic entry point was a moaning saxophone, which became the sound of poison, played in the show by a trio that occasionally roams the stage, as s he spread it. “I just started hearing that sound in my head,” he said. As Mac continued to email him lyrics (in no particular order), Ray composed what became the show’s 26 songs, drawing inspiration from New Orleans jazz, swing, jazz soul, touches of Ornette Coleman and John Coltrane and other influences, though he was reluctant to affix any firm labels. “I don’t like to write things that are an impression,” Ray said. “I just wrote the things I like to play.”

Mac describes the show as something of a “fever-dream prayer,” an idea that’s literalized by the set, created by costume designer Machine Dazzle, another longtime collaborator. It was he who suggested that the action actually took place inside Socrates’ body, with a cloth-draped proscenium as a ribcage.

The vibe is wild and messy excess, though Dazzle said the pandemic has subtly affected his approach to costumes, and not just because the price of tulle has doubled.

“People are different than they were two years ago,” he said. “You can tell they’ve been thinking. They are more in their heads.

At the start of the 2020 pandemic lockdown, the core creative team started having virtual lockdowns twice a month, to talk about the show (and what they missed seeing each other in person). The first workshop took place in October 2020, under a tent in a square in downtown Brooklyn.

Niegel Smith, the director, said the casting was about “keeping the friendship together”, as well as the art. The nine-performer, eight-piece company (who are choreographed in the show) is a mix of veterans from previous Mac projects and new collaborators, including jazz singers Kat Edmonson and Queen Esther and Broadway veteran Kenneth Ard (” Cats”, “Starlight Express”, “Smokey Joe’s Cafe”).

Ard had already left acting when the pandemic hit and was working as a business manager. He moved to San Francisco during the lockdown, but returned to New York to audition on the recommendation of Dazzle, a friend.

“I was tired of commercial theater, but I hadn’t really experienced artistic theater, as I think,” he said in a video interview. “Matt Ray’s score blew me away. I just thought, I have to sing these songs.

Edmondson was recruited by Ray, with whom she carried out at Carnegie Hall, Jazz at Lincoln Center and elsewhere. It’s her first stage role and, in the song ‘Virtue’, a chance for some serious scatting, something she’s only recently added to her own shows. “It’s kind of a new thing for me,” she said. “It’s so much fun.”

The physical demands of “The Hang” aren’t as extreme as those of Mac’s last play,”Le Fre,which put the actors – and the audience – in a giant ball pit. (The play, directed by Smith, was still previewing at Flea when the pandemic hit.)

Yet during the recent rehearsal of “The Hang,” performer El Beh’s full skirt adorned with Medusa heads kept toppling the urn where cast members burned their fake Socratic beards during “OK Boomer”, a riff on the cultural ephemeral. And there was a strategy on how best to collapse on a giant beanbag during a fast-paced philosophical dialogue called “The Ephemeral.”

Chanon Judson, the choreographer, described the movement, like much of the show, as a collage. “I really like sweeping the room and mopping up everyone’s idiosyncratic ways of being in space,” she said.

In Plato’s “Apology”, Socrates’ downfall is blamed on Aristophanes, who in his play “The Clouds” had ridiculed Socrates as a charlatan, helping to turn public opinion against him. “The Hang” certainly gets its digs at Aristophanes. But in Mac’s tale, if Socrates has a foil, it’s Plato himself, who lurks around the action, taking it all on an ancient Greek stenographer.

Plato was famous for his critique of theatricality, condemning drama as a form of lying that manipulates audiences, with sometimes dangerous consequences. It’s an idea that “The Hang” turns upside down.

“I wanted to know, can we be as theatrical as possible, can we bring queer culture into it and find a way to express a truth rather than a lie?” Mac said. “You can’t hide when you sing. You can try, but you always end up telling some kind of truth about who you are.