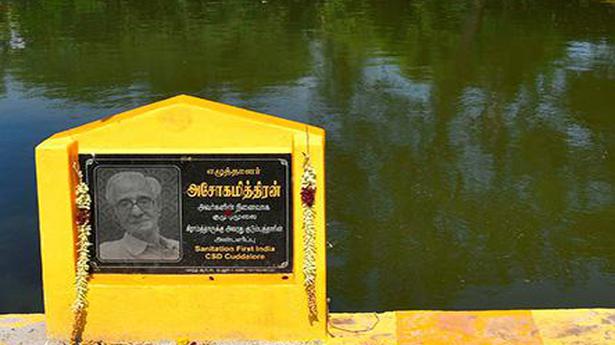 Tank in Cuddalore restored in homage to the writer

Writer Ashokamitran Thanneer, published in 1973, depicts the severe water shortage and hardships faced by middle-class residents of a neighborhood in Chennai.

Inspired by the works of the writer, his eldest son, in association with a non-governmental organization, restored a chariot in the district of Cuddalore paying due homage to the noble ideals of his father.

For Ravishankar Thyagarajan, bank manager in Chennai, the inspiration for the makeover of the reservoir came from his father’s continued concern and attention during the severe water crisis in Chennai in the 1970s.

The Pillaiyar Kovil Kulam in Kumudimoolai village in Cuddalore, which was in disuse and overgrown with vegetation, was restored by Mr Ravishankar as a tribute to his late father, who would have turned 90 on September 22.

He had traveled to Cuddalore to inaugurate an ecosan toilet for the villagers through Sanitation India, an NGO, when he learned that the water bodies were unused due to lack of maintenance and encroachments. As a child, Mr. Ravishankar personally experienced the severe water crisis in Chennai and grew up listening to his father talk about the need to use water with care.

Sanitation India mentioned that the Pillaiyar Kovil Kulam was in disuse and Mr. Ravishankar decided to rejuvenate it. â€œIt was a seasonal pond, and restoration work started in 2019. The first phase was completed in December 2019. No work was done in 2020 due to the pandemic and the reservoir was completed in 2021 The reservoir can hold up to 3.5 million gallons of water, â€he says.

According to Padmapriya Baskaran, managing director of Sanitation First India, the reservoir was in poor condition and the inlets, outlets and bunds were broken. The restoration first started on the north side with the reconstruction of the entrances and exits. A sump was built in the middle of the tank. The first phase was completed in 2019 and work began on the east side in 2021. The south side of the reservoir had remained intact.

Ms. Padmapriya recalled that Ashokamitran moved to T. Nagar when he came to Chennai in 1952.

There was a severe water shortage in the city, and he saw how the women struggled to get even a bucket of water to drink.