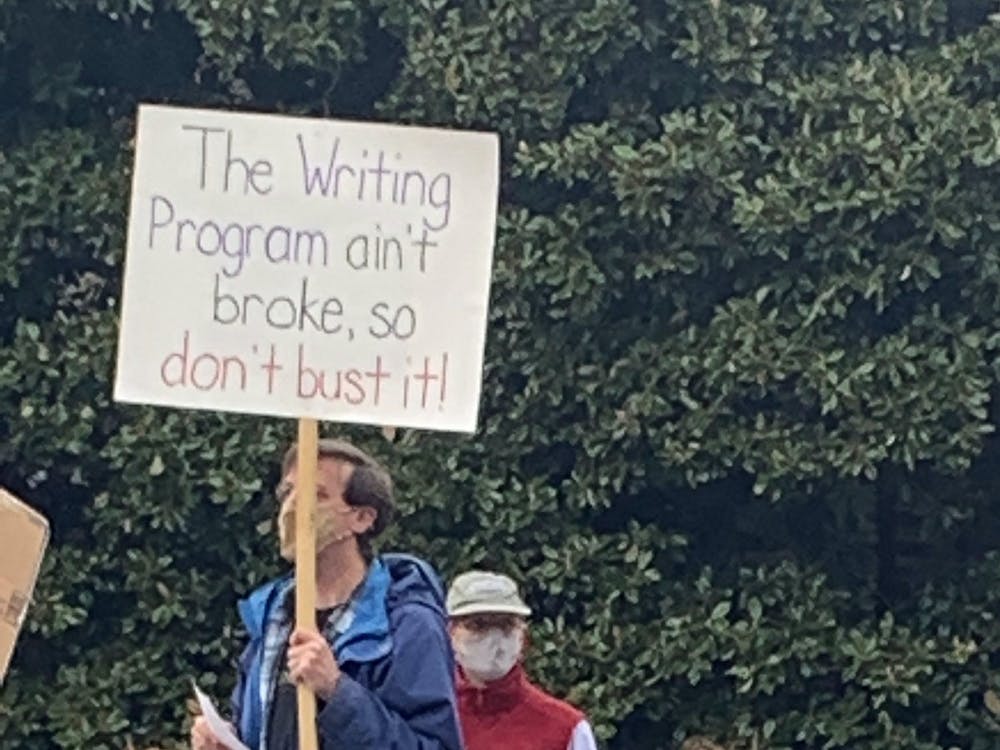 Students, faculty and members of support organizations gathered outside the Duke University Chapel to protest on Sunday against recent changes to Thompson’s writing curriculum.

The protest, organized by the Duke Faculty Union, started at 3:30 p.m., and eventually reached over 100 protesters on the steps of the chapel.

The DFU planned the protest after an email Thursday from Denise Comer, director and practice professor at the TWP, to professors in the program, announcing sweeping changes to the TWP. The email, obtained by The Chronicle, indicated that there would be a change from an approach that emphasizes writing in disciplines to one that focuses on rhetoric and composition.

â€œThis initiative marks a change in strategic direction for TWP, requiring professors who are academics in teaching writing and oral communication – expertise gained through a doctorate. with a specialization in rhetoric and composition, â€Comer wrote. â€œOur current model of teaching writing in a disciplinary context has served us well over the past 20 years, but the program must evolve in order to maintain excellence and truly prepare current and future Duke students to lead. , discover and get involved. “

Currently, Duke is ranked second in â€œWriting in the Disciplines,â€ according to US News and World Report.

Other signs reflected the feeling that the program changes are anti-union, including “What’s the Real Duke Difference?” Union rupture! And “Learn from your past with Harlan Countyâ€¦ Stop Breaking Unions!” In reference to the series of skirmishes in Kentucky County in the 1930s between the charcoal unions and Duke Power.

Protesters also chanted to the sound of drumbeats: â€œHey Duke, you’re no good. Treat your teachers like you should! “,” Ho ho ho, the fight against unions must end “and” What is disgusting? Union rupture! ”

Get The Chronicle delivered straight to your inbox

Subscribe to our weekly newsletter organized by an editorial. Cancel anytime.

Flyers were distributed encouraging attendees to sign a petition on behalf of TWP faculty and to send emails to Trinity Dean Valerie Ashby and Gary Bennett, vice-president of undergraduate education.

â€œThe professors in the Thompson Writing Program are dedicated to their work, especially teaching Writing 101,â€ said Michael Dimpfl, lecturer at TWP. “We’re here today to make sure the University not only recognizes and recognizes our value, but gives us the renewable contracts we deserve.” “

Freshmen attending the protest expressed support for their experiences in Writing 101.

â€œI feel like our writing program is cool and unique and I don’t think there’s a valid reason to change it,â€ said Jordan Reaves, freshman, who is currently taking the â€œDolly Partonâ€. for the president? ” Writing course 101.

Other students suggested that curriculum changes would affect student engagement in learning.

“There is already sometimes apprehension about taking a writing course because I feel like ‘it’s not something I really need,'” said Trinity Johnson, a student in grade two who learned of her former instructor’s protest Writing 101. “With all the different topics [offered as Writing 101 classes], it’s less traditional. It can be in something that you really care about.

Non-TWP faculty members joined in solidarity with the DFU.

Jim Roberts, member of the executive committee of the Union of Professors of Elon University, was also in attendance.

“Assistant teachers have a systemic problem nationwide, that schools across the country are consistently paying them less and reducing their benefits, if they have any at all,” said Roberts.

Audrey Wang is a Trinity freshman and News reporter.