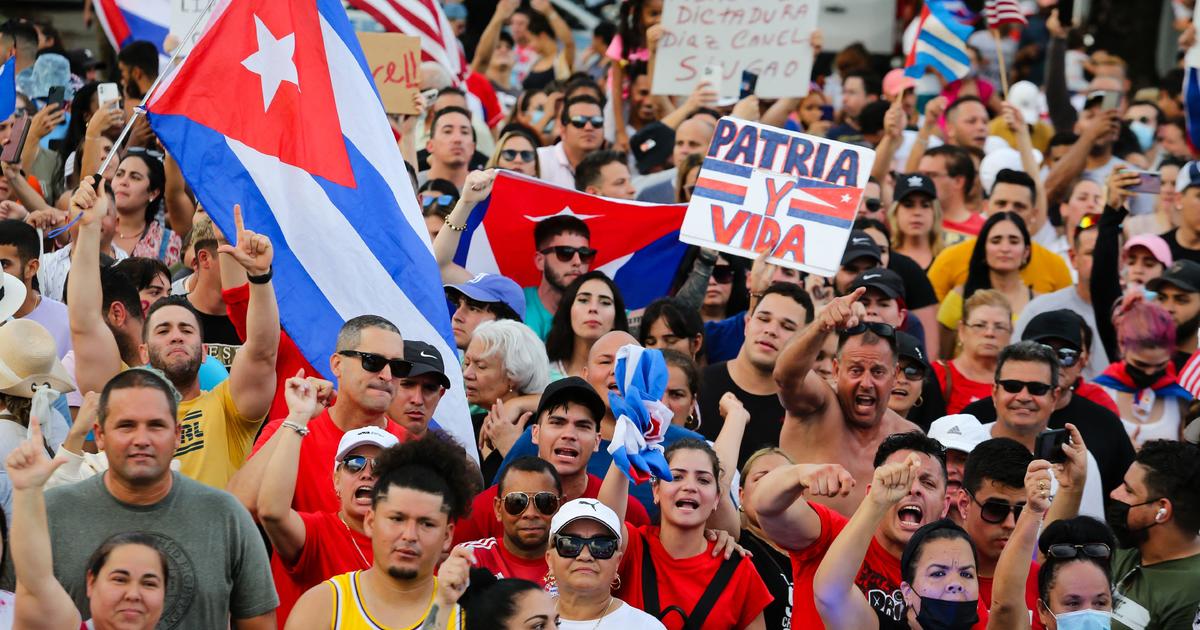 Thousands of people took to the streets on Sunday in the largest protests against the Communist government of Cuba for decades. The protests came amid one of the worst economic crises the country has faced, and as it struggles to tackle the increase in COVID-19 cases.

Cuba continues to suffer from the impact of a decades-old US trade embargo and more targeted sanctions imposed by the Trump administration, which the Biden administration left in place. Senior State Department Official Julie Chung tweeted support for Sunday protesters, but his initial post suggesting the anger in Cuba was only about “increased COVID cases / deaths,” drew a quick rebuke from Florida Republican Senator Marco Rubio, a prominent voice of the great politically powerful Cuban-American community in the United States

Rubio called Chung’s first tweet “ridiculous” saying the protests in Cuba “aren’t just because of COVID,” and added a blow to President Joe Biden: “It’s now 10:15 pm, and still nothing from @JoeBiden.”

Many in the Cuban and Latin American communities at large want the White House to stick to the strong position taken by Mr. Biden’s predecessor.

Cuban President Miguel DÃ­az-Canel appeared on television to condemn the protests – and to call on government supporters to respond, with a call to â€œfightâ€ in the streets against what he called provocateurs. Chung tweeted again to say that the US government was “deeply concerned about the” calls to fight “in Cuba.”

“We defend the right of the Cuban people to assemble peacefully,” Chung said. “We call for calm and condemn all violence.”

Many members of the Cuban-American community in Miami and other supporters took to the streets in South Florida on Sunday to show their solidarity with the Cuban anti-government protesters.

Hundreds of people waved Cuban and American flags at the Versailles restaurant in Little Havana in Miami on Sunday afternoon, prompting Miami police to close a main thoroughfare to motor traffic for several hours, “in support of the statement. event and to ensure the safety of all participants “.

The protests in Miami sparked a surge of support from local leaders, including the mayor of Miami-Dade, Senator Rubio and congressional officials from several districts.

“We are united with the Cuban people of the island and our entire community at this historic moment in the struggle for freedom, dignity and basic human rights,” said Miami-Dade Mayor Daniella Levine Cava in a tweet. “May their courageous actions bring real change and bring us closer to the dream of a free Cuba.”

In addition to his criticism of the Biden administration’s response, Senator Rubio used his Twitter account to share photos and videos of the protests in Cuba.

“Spontaneous street protests are erupting in several cities in Cuba right now with chants of #NoTenemosMiedo (We are not afraid)” he said. “The frustration caused by incompetence, greed and the repression of dictatorships is increasing rapidly.”

The Florida Democrats’ collective narrative disparaged the Cuban government as “nothing more than a failed tyranny,” while expressing support for the anti-government protesters: “We stand by the Cuban people as they raise their voices to protest against a repressive government that refuses to help its people. “

In a joint statement, the American representatives Mario Diaz-Balart, Carlos A, Gimenez and Maria Elvira Salazar, all Republicans, shared their support for the demonstrators in Cuba.

“The humanitarian crisis facing Cuba right now is another symptom of the incompetence and the absolute cruelty of Cuban tyranny,” they wrote. â€œWe know what freedom means to the Cuban people, and now, as the regime uses savage violence against the people who demonstrate peacefully in the streets, the world has an obligation to stand by the courageous Cuban people. ”

Cuban President DÃ­az-Canel, as his predecessors did for decades before him, attributes Cuba’s economic malaise to US trade restrictions and sanctions imposed by President Trump. In his remarks on Sunday, he accused American officials and others in the United States of fueling unrest in his small Caribbean country by spreading anti-government propaganda.