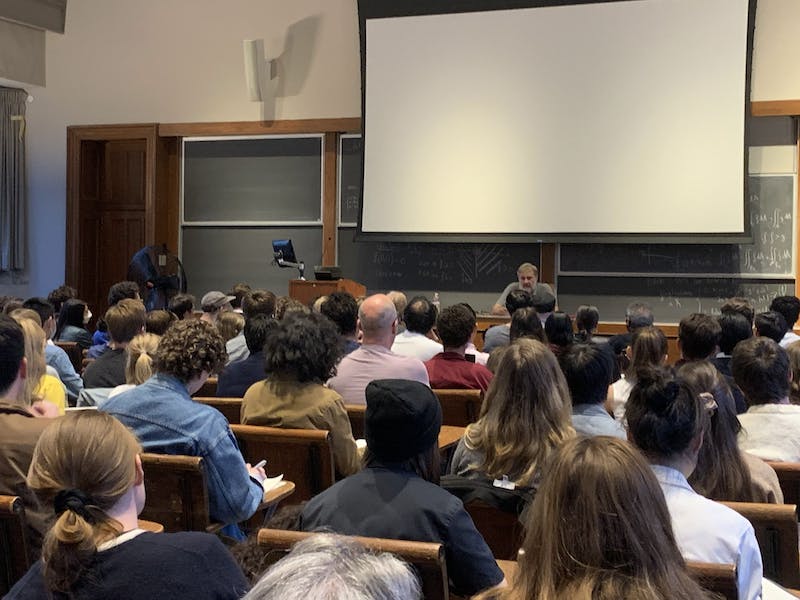 Renowned Slovenian philosopher and public intellectual Slavoj Žižek campus visited at the beginning of this month. His talk drew around 200 community members, as McCosh Hall 46 was packed and attendees streamed out of the room.

“I am especially delighted to welcome a speaker who needs no introduction. Tonight’s turnout is proof enough of that,” graduate student Florian Endres said at the event.

Endres introduced Žižek as “Senior Researcher at the Institute of Sociology and Philosophy at the University of Ljubljana, Global Distinguished Professor of German at New York University and International Director of the Birkbeck Institute for Humanities in London”.

At the top of the conference, Žižek discussed the relationship between gender and freedom.

“Your sexual identity is a matter of – in a deep sense – free choice, but the notion of freedom here is very radical,” he said. “It’s a very traumatic thing, involving a lot of physical pain, surgery, trauma, etc.”

“It’s not a simple freedom of choice. It’s really something like an unconscious choice,” he said. “In our unconscious we are much freer than in our conscious self-awareness. The most radical choices, we experience them as a necessity.

Žižek then pivoted the lecture towards the superego, Sigmund Freud’s idea of ​​the ethics and morals component of human personality.

“I want to start with the superego paradox noted long ago by Freud: the more we obey the command of the superego, the guilt we feel,” he said. “Enjoyment is a real impossible. You can never reach it fully and this failure makes us feel guilty.

“What have you done today to repay your debt to nature? Have you put all newspapers in the correct recycling bin? ” He asked. “Following the injunctions to recycle, etc., ultimately means that I follow rituals that allow me to put off doing something that would really tackle the causes of the ecological crisis.

“Let me go even further here: the fire in the Amazon rainforest can only set off alarm bells,” Žižek said. “The Brazilians, we are told, are killing the lungs of our land. However, if we want to seriously confront the threats to our environment, what we must avoid are precisely these rapid extrapolations that fascinate our imagination.

“This fascination for the catastrophe that immobilizes you is one of the ways of avoiding really facing the crisis,” he continued.

Get the best of ‘the prince’ delivered straight to your inbox. Subscribe now »

Žižek said, “What all the talk about how we humanity pose a threat to life, on and off Earth, is our concern about our own fate. The Earth itself is indifferent.

Žižek continued to talk about how humans perceive nature: “Nature is a social category. That is to say, what we perceive as nature is always overdetermined by our social contact.

He criticized certain anthropocentric ideas. “It is the most dangerous anthropocentrism. This idea, nature itself follows a kind of homeostatic balance, natural patterns,” he said.

“There’s Mother Nature, but it’s cold and cruel, to put it mildly, but that in no way implies that we should relax and trust our future.”

Additionally, Žižek addressed what he perceives as the dangers of modern science.

“Science and technology today are no longer just about understanding and replicating natural processes,” Žižek said. “We are trying to generate new life forms that will surprise us. The goal is no longer just to dominate nature as it is, but to generate something new, bigger, stronger than ordinary nature, including ourselves.

Žižek concluded by arguing for a radical change in the market economy.

“I claim that if there will not be a kind of abolition of the market, let’s say a socialization of the economy in the sense that we will have to make decisions [on] what to produce, how to coordinate, what cannot be left to the market,” he said. “If we don’t take this path, then we are lost.”

In a later interview with Endres regarding Žižek’s lecture and its connection to universality, Endres said, “He spoke of a universal object in a sense, or rather of its non-existence.”

“Nature, what is it and how is it somehow misused in political projects, how it has certain shortcomings,” Endres said.

“It spoke a lot to the second term of our title, which is pips,” he continued. “It’s much more interesting when things fail because they reveal an underlying structure than going straight to the thing and describing it.”

This lecture was part of a Department of Comparative Literature series on “Universality and its pitfalls” organized by Endres.

“I hope people are not only interested in the big names, but also open to exploring new theories. [and] new people,” he said.

The conference, entitled “Unbehagen in der Natur’: Thinking about the end of nature”, took place on Wednesday, November 2 at McCosh Hall.

Jackie Zhou is a news contributor for “Prince”. Please direct any requests for corrections to the corrections on dailyprincetonian.com.