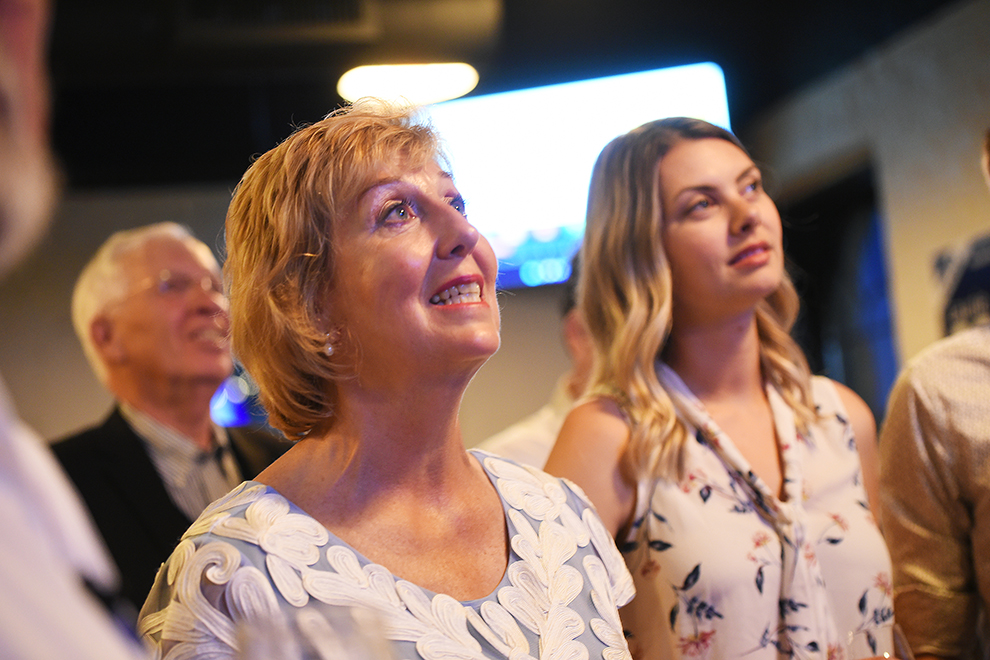 By Wanda G. Stark Last updated Jun 10, 2022
Share
Laurie Scott, member of the Progressive Conservative Party of Ontario, watches provincial election coverage for the results Thursday, June 2 at Pied Eyed Monk in Lindsay. Scott was re-elected with 52.75% of the votes cast in the riding of Haliburton-Kawartha Lakes-Brock where 102,111 voters were registered. /DARREN LUM Staff

The 2022 Ontario general election on Thursday, June 2, saw the lowest voter turnout in the province’s history, with just 43% of eligible voters turning up at the polls.
Turnout was 15% lower than the 2018 general election, but both saw Progressive Conservative leader Doug Ford win a majority government. Ontario’s PC Party won 83 of 124 seats in the Ontario Legislative Assembly, with Haliburton-Kawartha Lakes-Brock MPP Laurie Scott being one of them.
The riding of Haliburton-Kawartha Lakes-Brock saw 48,636 voters, with former incumbent Scott claiming 52.8% of the vote to be re-elected.

Elected for the sixth time to represent Haliburton-Kawartha Lakes-Brock since 2003 as an MLA, Scott was happy with the outcome and proud of her final term.
“Over the past four years, things have gone well at Haliburton – Kawartha Lakes – Brock. We were able to achieve many, many things. Four long-term care homes, more hospital funding, more internet. I’m very happy with how the past four years have gone, and I’m very humbled and honored to represent Haliburton-Kawartha Lakes-Brock again,” she said on election night at her birthday party. campaign in Lindsay.
Scott said she saw a shift towards an “even stronger” PC majority in the days leading up to election night, which gave her an extra boost of confidence.
“I feel very good tonight. We had a great campaign with great weather, and it was nice to reconnect with people after the pandemic. I was surprised how quickly the election was called at 9:11 p.m. with electronic voting,” Scott said, shortly after polls closed at 9 p.m. on June 2.

Scott spoke about her accomplishments, including how she raised awareness about the prevalence of human trafficking and other passion projects for her and the PC Party.
“Trafficking in human beings is always a sure passion. I was very passionate about broadband, I must say, and I worked very hard on this portfolio. I will always have a passion for health care because I was a nurse for 20 years, and I think there are a lot of challenges, but a lot of good options that will evolve as we move forward.
Scott also reflected on his family’s history in politics as his father, William C. Scott, served as MP for Victoria-Haliburton from 1965 and won six more elections.
“People said on the campaign trail, I got it more this time, that they voted for a Scott every time there’s a Scott on the ballot,” Scott said.
The New Democratic Party regained official opposition status, but leader Andrea Horwath resigned shortly after the election results were released.

Barbara Doyle, NDP candidate in Haliburton-Kawartha Lakes-Brock, was upbeat before the polls closed due to the support her campaign team received.
“I’m much more confident talking about provincial issues. It was much easier to talk about those things that I already talk about every day like health care and education. People were much more receptive this year, and we have amazing supporters, members and volunteers. Many people told us that they were voting for the NDP for the first time. Everything that was broken before COVID was more broken during COVID, like huge problems in healthcare and long-term care. It really highlighted how vulnerable we are,” the NDP candidate said.
Doyle was disheartened by Thursday night’s election results, but attended Scott’s campaign party to congratulate her on winning.
“I fear for all Ontarians in the province,” Doyle told the Echo on Friday, June 3. “I am very appalled by the results here in this constituency. So many people didn’t vote, and I’m surprised at such a big PC victory when that’s not what we were hearing on the pitch.
Doyle wanted to thank all his supporters for their encouragement.
“We just want our supporters to know how grateful we are for their dedication to us and their continued support. These are not at all the results we hoped for, but we will continue to fight and work every day. »
Doyle will return to her work as a curator at the Kawartha Lakes Museum and continue her volunteer work with numerous community organizations.
The Liberals failed to gain official party status with only eight seats in the Legislative Assembly, and Steven Del Duca resigned as leader.

Before the polls closed on Thursday night, Haliburton-Kawartha Lakes-Brock Liberal candidate Don McBey said, “We’re happy with the campaign we ran, coming from a third position, we wanted to make sure to cover the entire constituency. We had very good mailings and contacts with voters. Feedback from voters has been very positive. Big concerns about health care and long-term care for the elderly, and for young people, affordable housing and child care.
McBey said he was discouraged by PC’s lack of attendance at the candidates’ debates.
“It was such a short campaign, and no one really had a chance to see Laurie [Scott] because she hadn’t shown up for any of the debates. With the only televised debate they had, they left the PC podium to show that [Scott] was not there. With the all-candidates meetings, they broaden the policy discussion, and the three-way talks we’ve had with the Green Party and the NDP, we agree on so many things. It’s difficult because we didn’t have the CP representative to defend their position, which made the meetings tricky. I think there would have been a better campaign if there had been more opportunities for all-candidates meetings, even if they were virtual.
McBey won 13.6% of the vote in the riding of Haliburton-Kawartha Lakes-Brock, up from Brooklynne Cramp-Waldinsperger’s 9.9% in the 2018 general election.
“We have a traditional Liberal vote in this riding, and I think a lot of those people stayed home or didn’t run in the last election. We see that vote bouncing back,” McBey said.

Tom Regina, Haliburton County resident and Green Party candidate for Haliburton-Kawartha Lakes-Brock, said he did not expect the election results.
I felt very tired yesterday and was looking forward to it being over. What a result overall, it’s overwhelming and surreal. I received a lot of good responses, personally, and I heard a lot of dissatisfaction with the Prime Minister and even with our [former sitting member], which is generally well liked. I wouldn’t have predicted how it turned out,” Regina said the day after the election.
He said the party had gained an abundance of experience over the past two elections and would use that knowledge to help garner more support in the future.
“I had a very small team and modest resources, so taking that into account, we did pretty well; a lot more for our money. We would like to be able to maintain our constituency association between election cycles in order to build a strong base of support for our next candidate.

Haliburton-Kawartha Lakes-Brock Ontario Party Leader Kerstin Kelly said their campaign received a lot of support during her visit to the Haliburton area.
“There are so many great people in Haliburton, Kawartha Lakes and Brock. It was exceptional to meet everyone. The election is made to be very favorable to [Scott], But it is okay. I had a super big team that worked very hard and covered most of the riding and was very thorough. Fans desperately need change. They say the world is bad and we need it back. The Ontario Party offers that truth and transparency. Power must be returned to the people. It was the land of freedom and opportunity, and it certainly hasn’t been in recent years.
Kelly expected “a surprise” in the riding and received 7.9% of the total vote in Haliburton-Kawartha Lakes-Brock.
On Friday, June 3, Kelly said in a tweet, “Thank you to everyone who supported us. We had a good campaign…it’s just the beginning.