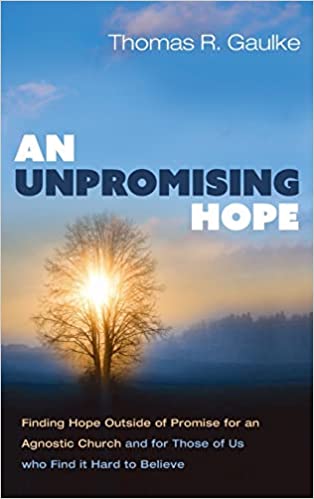 A hope without promise

Much of 21st century theology is still coming to terms with the legacy of Jürgen Moltmann. His most famous influential works Theology of hope and The crucified God, transformed much of the theological landscape of the twentieth century.

Moltmann’s work on hope was influenced in large part by the Jewish philosopher Ernst Bloch. That is, Moltmann developed a Christian theology of hope from a secular Jewish Marxist philosophy of hope. One could argue that Thomas Gaulke’s book is an essay in fixing the supersessionism of Moltmann’s approach – while simultaneously deepening and enriching the global and ecumenical reach of his influence. In this way, Gaulke responds more to the spirit than to the effect of Moltmann’s work.

Gaulke’s task in A hope without promise is rather fascinating. He asks if we can think of two complex theological terms, promise and hope, as overlapping one beside the other so as to be able to establish a secular theology of hope which is not based on the Christian promise. (Gaulke defines the latter as a guarantee of a future reign of God, given or transmitted to us.)

Can we speak theologically of hope completely within what Charles Taylor calls an immanent framework? This is Gaulke’s question. He wishes to speak of hope as a dream emerging inside and outside the community, a taste of what is to come which this community serves as its own appetizers, whetting its own appetite for a hoped-for future still uncertain, inspiring homesickness. for a house already sketched but only partially assembled.

Gaulke therefore undertakes in this book to find hope outside of promise. In doing so, he brings together two major concepts of Christian theology, each emerging from different streams of Protestant thought.

In Lutheranism, Gaulke’s native tradition, theologians have often thought of the gospel in terms of promise, even the gospel as promise. Because Gaulke makes insufficient reference to crucial theologians of promise in Lutheran thought like Oswald Bayer, I think this is the weakest part of his book, as he has an insufficiently robust (and therefore excessively negative) definition of the promise.

In the second installment, Moltmann’s Ecumenical (but still Reformed) Protestantism, Gaulke taps into the vast global network of theologians influenced by Moltmann who engaged in theologies of hope. On the hope side of the equation, Gaulke serves up a rich feast.

As I began to re-read Gaulke’s book to write this review, I kept asking myself, “What does he think he promises? is Where means?” The exploration of the concept of promise in another book by a Lutheran theologian, Gregory Walter to be promised, kept coming back to me, especially since Gaulke makes a connection between belief and hope. Walter writes, “God’s promise repeats itself with and beyond this ancient scripture, believable or not, marvelous beyond measure but hidden, masked and mingled with the humble and the ordinary. If impossible, this promise is God’s. If it is incredible, the promise breeds belief beyond belief, if there is a promise worthy of the name.”

Compare this to Gaulke’s claim, in the middle of his book, that

This passage contains what is most fascinating and at the same time most confusing in Gaulke’s book. On the side of hope, we discover the hope nourished by the hungry hopes all around us. This thesis, which he illustrates by reading a wide range of liberationists, feminist theologians and spatialized eschatologies, is attractive and compelling.

On the other hand, to claim, as Gaulke does, that the promise restricts or encloses, that the promise dictates, is to misunderstand the promise itself. Gaulke unnecessarily assigns something to promise that looks more like a guarantee. As a speech act, the promise is more tenuous than that. This leads Gaulke to contrast two terms that could have complete synergy.

Yet this fake opposition funds creative ideas anyway. To be faithful to Gaulke’s aesthetic, guided as they are by the idea that music is one of the great carriers of surplus, one could say that Gaulke the punks promise. He fails in one part of the lyrics, but that makes his proposition regarding the attractiveness of weak forms of hope somehow all the more compelling.

It leaves me wondering: is there promise beyond promise, the way there is hope beyond hope, and apparently belief beyond belief? As Walter Benjamin points out, “It was only for the sake of the hopeless that we were given hope.”

Over the course of the book, Gaulke offers multiple ways to consider how hope is a weak force – a force that inspires people in the community without guaranteeing that what is hoped for will come to pass. As a prime example, Gaulke notes that Ernst Bloch said, “Our heritage is the Peasants’ Revolt! Historians know that the Peasants’ Revolt failed to achieve its demands and was in fact violently suppressed. Nonetheless, for Gaulke, Bloch “looks back not to go back or be ‘great again,’ but rather to hope and dream as the peasants hoped and dreamed, as we hope and dream again.”

Throughout much of the book, Gaulke riffs on concepts present in the works of Brazilian theologian and poet Rubem Alves, particularly through the somewhat untranslatable Portuguese term saudade (loosely, “nostalgia”). Alves juxtaposes two possible forms of hope: messianic humanism and humanist messianism. The first understands humans as their own messiah; the second understands God as a humanist. We see here the continuation of the concept, present in Bloch, of the added value of the immanent itself. Humans are both themselves and more than themselves. Or God is God while also being humanist.

In a later chapter, the Holler— theologian A. Elaine Brown Crawford’s term for the primal cries of pain, abuse, and separation — works as a source of hope. And in the final chapter, hope appears in Vitor Westhelle’s use of the Greek term choir, a space of openness, listening, listening and welcoming. In Westhelle’s reading, the cho¯ra, the empty space, is tenuous because to move away from it requires a crossing whose equivalent cannot be guaranteed, like the displacement of Abraham and Sarah, departed from Chaldea without knowing how they were going or where they would arrive.

I find myself at the end of this book somewhat perplexed as to the distinction Gaulke would make between what he calls “hope without promise” and what I would call “faith.” And yet, somehow, reading this book, I feel freer and more interested in faith than before, so maybe despite the terminological confusion, Gaulke accomplished something important thing.

After all, he invents a term, belief-fluid, it might help those of us who talk about faith in secular contexts to do so in a way that does not replace other forms of belief and non-belief, but rather accompanies them collectively. As Gaulke asserts at the end of the book, in a beautiful twist of phrase, “hope should be sipped from wherever it is.”

Reporter shares something exciting he heard on Newcastle’s summer window