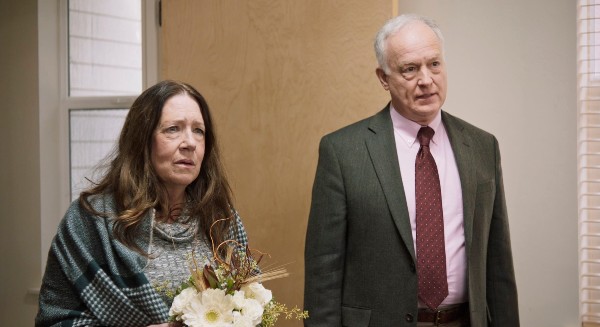 The piercing traumas of school shootings, when they made their way into the movies, rarely got the right tone. Even the best of intentions to embark on such tragic horrors can seem insincere, even exploitative.

â€œMass,â€ Fran Kranz’s meditative bedroom piece, is a sober and heartbreaking exception. Kranz’s film, the veteran actor’s first as a writer-director, tells the story of two sets of parents who meet, cautiously and with wounds still alive, to chat six years after a school shooting who reunited their families.

Gail (Martha Plimpton) and Jay (Jason Isaacs) lost their son in an attack by the son of Richard (Reed Birney) and Linda (Ann Dowd,), who also died that day. Their meeting, in some church in front of a vast field and snow-capped mountains, makes up the whole film, built around an intensely emotional dialogue of grief, regret and perhaps catharsis, performed brilliantly by a quartet. of actors.

We do not immediately know the reason for the meeting. Kranz, whose film feels destined for the stage, begins with the anxious setting up of the table at the church, an episcopal chapel. A church volunteer (Breeda Wool, also excellent) makes nervous preparations with a mediator (Michelle N. Carter) who arrives early for a meeting that is never specified, as if she is too sensitive to the issue. equal voice. In his sober way, â€œMassâ€ argues that one must carefully create â€œa spaceâ€, both literally and figuratively, to speak of the unspeakable,

Once they are all seated, the conversation is initially timid and polite. For us, the feeling that we are slowly approaching an iceberg of grief is only growing. This is the first time they have met but, as we come together in little hints, they have gone through years of public debate. The lawsuits, not between themselves but other families of the victims, limited what Richard – a clinical situation analyzer, the only one in a lawsuit – and Linda – a moving, soft-spoken woman with sensitive eyes and sad – have already been able to say. She and Gail have already written to each other. But little by little, the tone rises.

“Tell me about your son?

“Because he killed my son.”

The anguished dialogue unfolds in a remarkably natural way, even as everyone struggles to express their feelings. Jay and Gail fight to contain their rage. The tense conversation sometimes slides into familiar talking points about guns, video games, and mental health, but mostly it tends to include some understanding. Why did he do it? Could they have done better as parents? Is the loss of one couple more important than the other? Is forgiveness possible? How can they understand it?

â€œThe love we had was real. And the truth is we thought we were good parents, and in a terrible and confusing way, we still think so,â€ Linda said. “Is it worse than I thought being a good mother?” ”

None of this may be your idea of â€‹â€‹a happy movie night. But scratching at true wisdom, “Mass”, which begins playing in theaters on Friday, moves in his humanity. Kranz’s film is not perfect. As the conversation ebbs and the four parents stagger out of the room and awkwardly separate themselves, the film also struggles with how to get away. But in this film clearly photographed, sad and restrained, the comings and goings are of a tonic sincerity.

Every actor deserves praise but Plimpton, as a hardened woman trying to unload her grief without at the same time losing a piece of her son, is magnificent. Dowd’s performance, too, is so richly empathetic; Linda’s melancholy is bottomless, but there is something spiritual about her eagerness to alleviate the suffering of Jay and Gail, if she can. The performances are too internalized to appear theatrical. Often times “Mass” is most moving when they are just listening.

â€œMass,â€ a Bleecker Street release, is rated PG-13 by the Motion Picture Association of America for its thematic content and short, strong language. Duration: 110 minutes. Three and a half stars out of four.