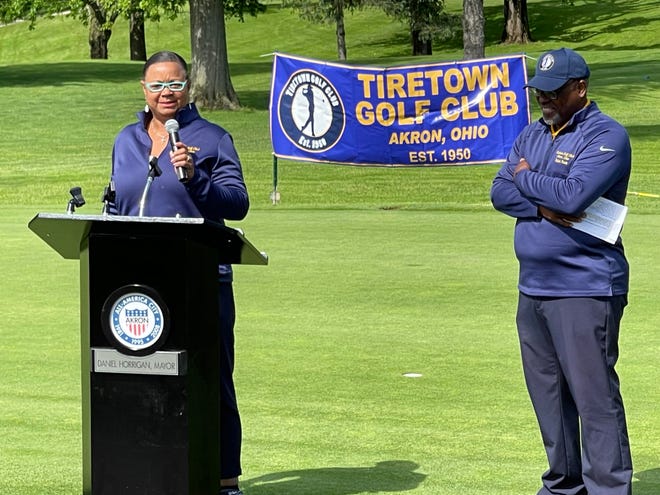 It’s possible that all of Ralph Paulk’s experiences prepared him for his most impactful chapter.

Paulk spent eight years in the Marine Corps and applies the disciplines he learned to lead and teach. He has worked as a journalist in four cities, including Akron, covering sports and politics and is now focusing on a book project. He discussed the successes and mistakes of Indy cars with Roger Penske and Chip Ganassi, and wrote about established franchises like the Pittsburgh Steelers.

Paulk, 65, of Fairlawn, puts it all to good use as president of Tiretown Golf Club, the largest predominantly black golf club in the United States.

When he took office in 2017, the club founded in Akron in 1950 had fewer than 50 members; now the list is approaching 200. There were six women; there are now 25. Tiretown has provided about 60 volunteers, the most of any group, for the $3 million Bridgestone Senior Players Championship, which ends Sunday at Firestone Country Club.

With a focus on bringing in and supporting young members, Tiretown has awarded eight scholarships this year to high school students, nine when a $2,000 Urban League scholarship is included. . Tiretown is also paying for 30 youth to participate in First Tee of Greater Akron programs.

It’s just a push started since Paulk took over.

“I have to get Ralph under control,” said Michael Robinson, Vice President of Tiretown and member of the local First Tee board. “I’m kind of like his guard and he bounces off me. If Ralph was successful, everyone in this club would be going crazy right now because his mind thinks like that. He’s so creative and he has so many ideas. ‘Ralph, we can’t do everything now. We need to have a strategic plan in place to make some of these things happen very efficiently, instead of just running to get things done.

“I’ve been a member for 13 or 14 years. I’ve never seen the excitement, the commitment… in terms of our community involvement, our focus on youth development, our partnership with groups like Urban League, NAACP, South Akron Youth Mentorship. Our visibility as a club in the eyes of some of these organizations is really rewarding for me.

“He’s the Pied Piper, no doubt, but we have some pretty talented people on our board,” Robinson, 63, of Akron, who works for the Cleveland Clinic, said during the interview. ‘a telephone interview. “We all catch the vision with him and help execute these things.”

Tiretown sold out its annual scholarship tournament on Saturday at Good Park as 144 golfers took part in an 8am tee time. Paulk said he secured corporate sponsors and more than 100 co-sponsors. After the event was over, some members traveled to Firestone to volunteer.

How Alex Cejka and his father ended up in Germany:‘The whole journey shaped me’: A risky journey to escape communism gave golfer Alex Cejka his struggle

“That level of commitment is what really sets us apart, not just from black golf clubs across the country, but from any club in the country,” Paulk said last week. “There are a lot of things we do, but I think helping out in this way at this tournament by volunteering, helping other charities raise money, it means a lot to us.

Dr. Robert Kamienski, 74, retired chief of cardiac surgery at Cleveland Clinic Akron General, joined Tiretown about two years ago. His involvement came at the suggestion of Greg Hill, an orthopedic surgeon in Cuyahoga Falls whose wife, Judi Hill, is president of the Akron branch of the NAACP.

Kamienski takes an interest in golf; his son Matt ran the President’s Cup for more than 10 years and is now director of business affairs for the PGA Tour. In 2021, Paulk asked Robert Kamienski to join the Fund Development Committee, which he and Paulk’s wife, former Beacon Journal reporter Marilyn Miller Paulk, now co-chair.

“I think Tiretown has a great future because their attitude is not just a bunch of guys who haven’t been able to play golf in many places before,” Kamienski said in a phone interview. “These guys are gentlemen, they love to golf, they take the opportunity to help young black people in the community with the First Tee and also through their scholarships. Not just black kids, but underprivileged kids.

Kamienski said Tiretown is working on a partnership with the Cleveland Clinic that would allow some of the club’s scholars to enroll in a radiology program. Although details are not finalized, Paulk said the students will study x-ray technology for two years at Kent State and then work for the Cleveland Clinic.

Paulk is also trying to revive the golf program at Buchtel CLC.

“Ralph has some great ideas and hopefully he’s here to see some of them come to fruition in the future,” Kamienski said. “I support Ralph 150%. It’s a dream for him, but he’s not trying to be a big hero here. He brings everyone with him, I think that’s great.

“I met some of the youngsters who are going to be part of the Buchtel team who are with First Tee. They shake my hand, they look at me, they remember my name overnight. It’s something I like to see. It’s one of Ralph’s big dreams and it’s no pipe dream.

Carney, 88, a silver medalist in the 200 meters at the 1960 Olympics in Rome, is an avid member of Tiretown who has volunteered at the PGA and Champions Tour tournaments in Firestone for 40 years. This year he had his 9-year-old grandson Issa Perry, a pupil at Holden Elementary in Kent, with him as he worked the pass-through between No 9 and No 10.

“This year is the first year that we’re going to have some of our junior golfers volunteer with other members,” said Bellaire-born Carney, who came to Akron in 1959 to work for the department store company Mr. O. ‘Neil, stay until 1989.

Robinson said none of these projects would have been started without Paulk’s connections. After Paulk left the Beacon Journal in 2001, he taught in public schools in Akron, then returned to the world of journalism. He covered politics at Ft. Myers, Florida, college football and NASCAR in Richmond, Virginia, and the Steelers, auto racing and golf in Pittsburgh.

“His military background in the Marines, he’s a guy who just goes after and doesn’t really accept no,” Robinson said. “He has so many connections since he was writing and he uses those contacts to improve the club.”

Paulk said while he was inspired by everything he did as an adult with Tiretown, it started in the Marines.

“In the Marine Corps, it’s about organization, it’s about forgiving, it’s about being ruthless,” Paulk said. “NASCAR and Indy Car were interesting because you see the work they did to find sponsors, to be organized, you have no chance of doing that if you’re not.

“You look at their successes, their mistakes. I had great conversations with Chip Ganassi about things he wished he had done differently. You look at his Indy car team, he’s been through more drivers than probably anyone. But those are the lessons he learned with those mistakes, which is why he is so successful. They won [the Indianapolis 500] this year with Marcus Ericsson.

Paulk is negotiating with NASCAR to have some of the younger Tiretown members attend the Verizon 200 at the Brickyard 400 at Indianapolis Motor Speedway on July 31. This is another of Paulk’s ideas that Robinson was unable to master.

Paulk’s wife, Marilyn, is also immersed in Tiretown, but said her husband thought about it “24/7” as he revived the club which was virtually dead.

“He’s very passionate about it,” she said Friday while volunteering at No. 17 in Firestone. “He let the people, the members, know that they can do so much more. They don’t have to settle, they could make a difference.

“He met people on the golf course, gives them his card, talks to them, attracts them. He has never met a stranger. If they’re wearing a Marine cap, he comes up and tells them about Tiretown. She’s a good cheerleader, a good spokesperson. Approach to the mayor to make Good Park our home course. Attract women to the group. At one point we didn’t have any. We even have members who don’t play golf who are enthusiastic about doing things for the organization.

“It’s one of the most satisfying and rewarding things I’ve ever done,” Paulk said.

Dermot O’Neill: Deeply respected “gentleman” gardener, entertainer, writer and cook, “with a passion for what he did – and very kind to it”

What is Valhalla? Valhalla explained