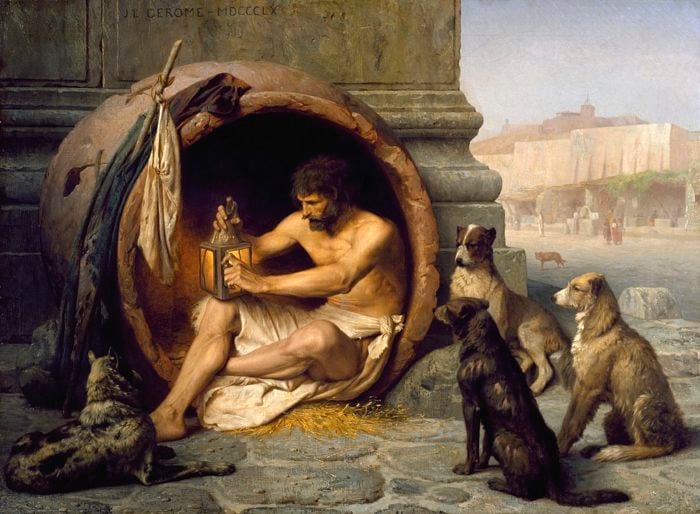 Probably the first person to finger someone

The ancient Greek philosopher Diogenes the Cynic was most likely the man who coined “the finger” as an insult.

The historian of philosophy Diogenes Laertios wrote that the Cynical philosopher Diogenes made the rude gesture to the orator Demosthenes in the 4th century BC in Athens.

When people in an inn expressed their desire to see the great orator Demosthenes, Diogenes allegedly showed them his middle finger and exclaimed: “This, for you, is the demagogue of the Athenians.”

Even though the gesture was used in ancient Greece, modern Greeks â€œimportedâ€ the offensive finger gesture from Western cultures.

“It is one of the oldest known offensive gestures,” explains anthropologist Desmond Morris.

It shows the back of a closed fist with only the middle finger extended upward, although in some areas the thumb is also extended. The extension of the fingers is considered a symbol of contempt in various cultures, mainly in Western societies.

â€œThe middle finger symbolizes the penis and the fingers curved on either side, the two testicles. In doing so, you’re essentially giving someone an offensive phallic gesture, â€Morris explains.

The Greek philosopher Diogenes the Cynic

By today’s standards, Diogenes was unique in many ways; he was a homeless by choice whose primary purpose of life was the pursuit of wisdom.

His unique approach to life had absolutely nothing to do with the norms and rules of society, whether today or in ancient times.

He found the shelter he needed inside a huge ceramic pot, rejecting all comforts and luxuries – yet his observations on life, politics, and society were surprisingly precise, though often they were. expressed in offensive language.

Born in Sinope, the Ionian city by the Black Sea in 412 or 404 BC, he is considered one of the founders of Cynical philosophy, along with Antisthenes and Crates.

He believed that social values, material possessions and luxuries alienated man from true happiness – which can only be found by living in the simplicity of nature.

His father was a coinmaker in SinopÃ© and the young Diogenes had worked alongside him in the most materialist of all companies.

A story goes that the young man soon went to the Oracle of Delphi, and was told that he should “degrade the currency”.

And that’s exactly what he did when he returned to his hometown. The difference was that he believed he should disfigure the people depicted on the coins, i.e. the rulers.

This, quite understandable, led to his exile from SinopÃ©, and Diogenes then went to live in Athens.

Once there, the Greek philosopher began to live a simple life, which later became his overall philosophy.

He slept inside his giant pot at night and during the day he begged for a living while walking the streets – all of these behaviors challenged the social norms and values â€‹â€‹of the time.

At night he walked the streets holding a lantern, telling people he was looking for an honest man. He will later claim that he never found one.

Important news from the world of journalism education – Poynter

Juan Williams: Biden and Manchin are the most influential politicians of 2021