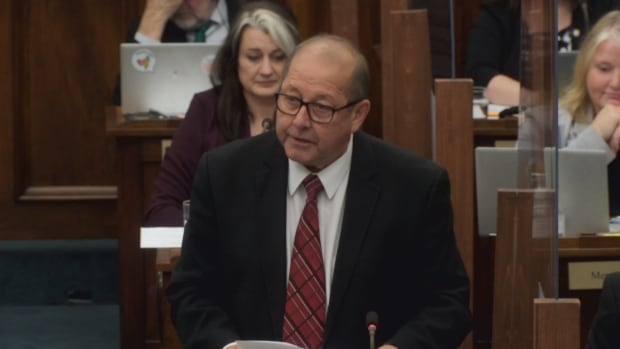 It was just before Christmas when Sonny Gallant noticed he was a little out of breath.

“It came and went,” Gallant said. “Then on Sunday when I went to church, I couldn’t breathe through my mask, so I thought, ‘OK. Something’s wrong.'”

The member for Évangeline-Miscouche and interim Liberal leader has decided to have it checked.

He saw his nurse practitioner the next day and things quickly got serious. She sent him to the hospital, where he was admitted to the intensive care unit for six days, then sent to the hospital in Saint John, New Brunswick, for a dye test.

“The first news that there was something wrong with my heart was scary. Then waiting for the dye test was quite a long time because that’s what tells you exactly what happened and what they can do for you,” Gallant said.

The results of the dye test revealed a blockage in two arteries.

“Which is not something to be taken lightly,” he said. “They saw there was damage. They gave me medicine and I didn’t need an operation.”

They told him to go home, take his medicine and change his lifestyle.

“It definitely puts things in a different perspective for you,” he said, adding that while in hospital he had thought about how he should have had a different diet and done more. of exercise.

He made these changes when doctors sent him home – and now he’s lost some weight and feels he can breathe better now.

“Definitely a red flag,” he said.

He took the opportunity during Friday’s session of the legislature to thank all the medical professionals who helped him, and while thanking his wife and family, he broke down with emotion. His speech earned him a rare standing ovation in the house.

Gallant’s story is one of approximately 100,000 similar each year in Canada, according to the Heart and Stroke Foundation.

And people like him — with high public profile and eager to tell their stories — are a huge help in getting the message about heart disease to those who need it.

“Influential people tend to have larger social networks, so they have a bigger channel to communicate those important messages,” said Kathryn Rand, director of the Heart and Stroke Foundation.

“In general, sharing stories is a powerful way to communicate with the public.”

She said this kind of thing sparks conversations with loved ones who talk about heart health, and the discussion can lead people to change their lifestyle.

Currently, nine out of 10 Canadians have risk factors for heart disease and stroke, she said.

And while there are some risk factors that can’t be helped — like age, gender, ethnicity, and family history — there are things people can control, like getting at least 150 minutes of moderate exercise per week. People should also increase their intake of fruits and vegetables and reduce processed foods in their diet.

“The most important thing is consistency over time and making small, incremental changes,” Rand said, adding that these kinds of changes are easier to accommodate, rather than big changes all at once.