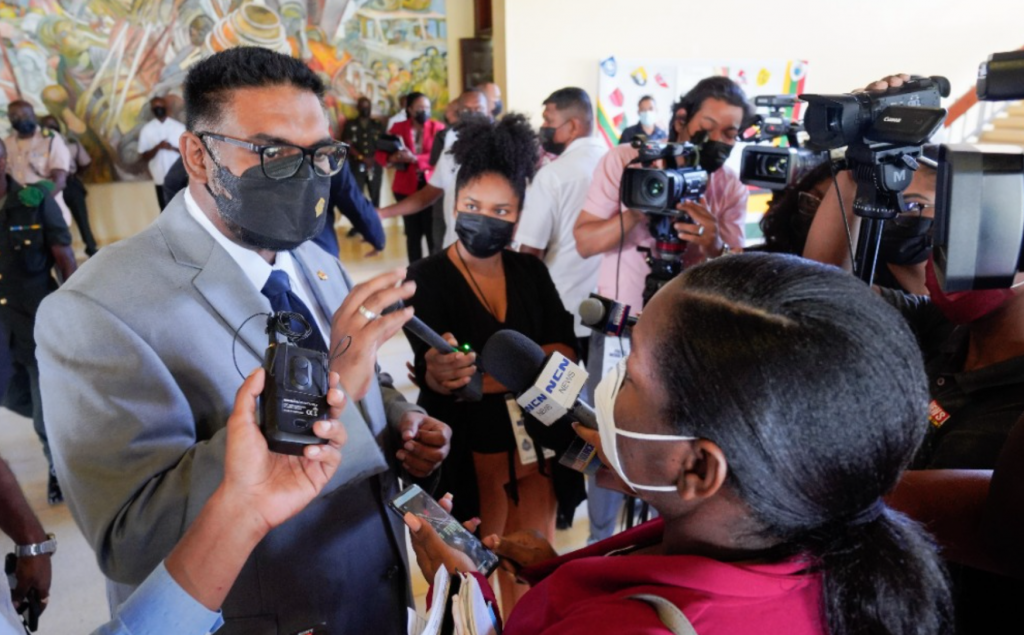 President Irfaan Ali has rushed to the defense of Vice President Bharrat Jagdeo against corruption allegations and is now questioning the credibility of the Vice News Agency international reporter who interviewed the Vice President about the allegations.

The vice president has denied allegations that he took bribes from Chinese companies to land big contracts in Guyana.

The Chinese Embassy in Guyana has also denied the allegations. And the Chinese businessman who was used by reporter Vice as a source also backed down from the claims, telling local state media that he never made such an accusation.

Asked by journalists about the issue today on the sidelines of the annual military officers’ conference, President Irfaan Ali dismissed the reports and allegations while questioning the credibility of the journalist who conducted the interview with the Deputy President.

“My government is above all odds,” the president said as he told local reporters he had received reports that the award-winning journalist who interviewed the vice president about the corruption allegations may be influenced by “special interests”.

According to the president, “there’s a lot of sensationalism going on and I’m not into it, I’m into the facts and I’m building a Guyana with honesty and integrity, based on hard work and based on facts. This same reporter didn’t even know what the Amaila Falls project was and didn’t even know the names of the roads but he came here and I heard because we also have intelligence I heard that the journalist had certain special interests and the allegation was made and as president people called me and said that this journalist had a special interest and a special group and was run by a special group… And I want the journalist answer if it is true”.

While the Vice news agency has yet to release its report on the vice president’s interview, the Guyanese government has launched a major public relations campaign against the allegations that were presented to the vice president during the interview. ‘interview.

It was the vice president’s office that released a video recording of the interview six days after the one-on-one meeting.

In the interview, Vice President Jagdeo seemed stunned by the reporter’s questions about his alleged involvement in accepting bribes from Chinese businessmen for lucrative contracts in the country. He dismissed and denied the allegations and, at a later press conference, said the foreign news agency was trying to implicate Guyana in the economic dispute unfolding between China and the United States.

“She said the vice president would change the Constitution. How absurd the allegation is. Could someone wake up and change the constitution? There is a process and that alone and misinformation discredits it and tells you that its sole purpose was to pursue a particular interest. Go do your research on this news agency and on this individual,” he encouraged local journalists.

The Chinese Embassy in Guyana issued a statement on Wednesday condemning the questions and allegations that Chinese companies paid bribes for contracts in Guyana.

According to the Chinese Embassy, ​​”Chinese companies operating in Guyana abide by local laws, international practices and market rules, participating in major projects through open and fair competitions, which is beyond reproach.”

In a statement that was sent to sections of local state media, the Chinese businessman at the center of the allegations reportedly said he never solicited a bribe or inducement from the from a company or an individual for himself or for a Guyanese government official, including the Vice President.

The businessman is the tenant of one of the vice-president’s personal properties and has lived in Guyana for several years. He is said to have Guyanese nationality and has been seen in the past attending important government functions and meetings involving Chinese investors.

Vice News Agency reporter Isobel Yeung, who interviewed the vice president and found herself in the midst of the Guyanese government’s wrath, seems taken aback by the controversy sparked by her interview.

In a post on Twitter, she pointed to various reports in the Guyanese media about her interview and said, “we seem to have struck a chord with Guyanese Vice President Jagdeo. Our report hasn’t even come out yet.

The Vice News Agency is known for its documentaries and long reports on major international issues.