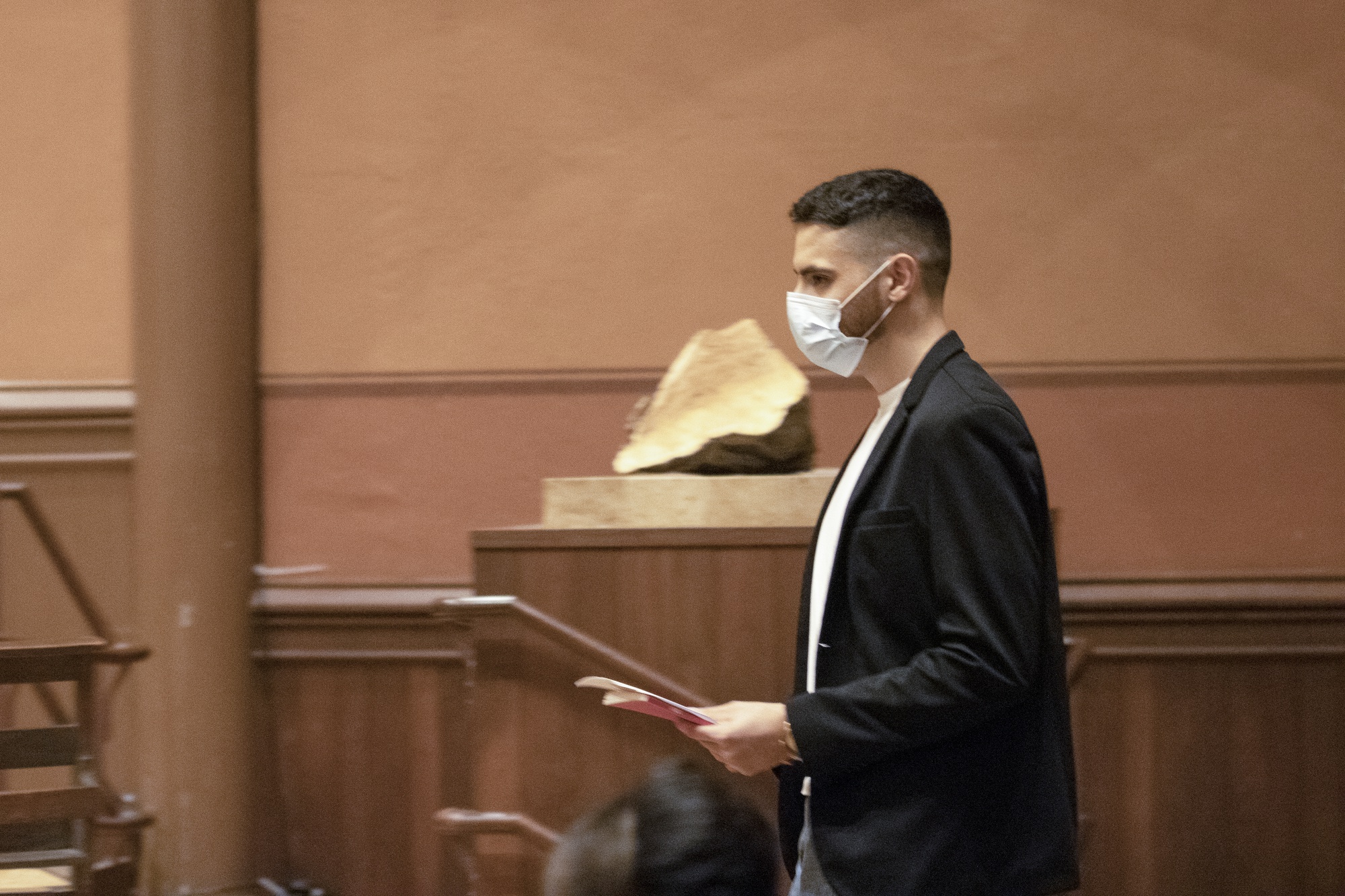 Mohammed El-Kurd, a Palestinian poet and journalist from East Jerusalem, spoke on Wednesday about the intersection of violence and the law at an event hosted by the Middle East Law Students Association of the Faculty of Harvard law.

Co-organized by the Law School’s International Human Rights Clinic and HLS Advocates for Human Rights, the conference venue was moved to First Church in “solidarity with the Harvard Graduate Student Union strike,” which should last until Friday.

El-Kurd became The Nation’s Palestine correspondent in September. El-Kurd and his twin sister, Muna, have emerged in the spotlight for their popular activism and online advocacy for Palestine. The siblings were named two of TIME magazine’s most influential people in 2021.

Mohammed El-Kurd – whose first poetry collection, RIFQA, was released earlier this month – argued on Wednesday that instead of serving as an overly intellectual and inaccessible art form, poetry could be used as â€œDidactic toolâ€. He can shine a light on the lives of ordinary people and share candid thoughts on daily struggles and suffering, he said.

El-Kurd also described poetry as a way to demystify the law. He cited one of his favorite poets as a writer who “translated” difficult legal codes through his own verses for “people who did not understand legal jargon”.

Censorship has always been “part of [his] reality, â€El-Kurd said. His mother, who was one of his main creative inspirations, also experienced regular censorship of his poetry.

“She adopted this game with my dad where she read the poems to him, and they would bet on which lines would be censored,” he added.

Nicole L. Khamis, co-chair of the Harvard Law Students Association in the Middle East who led the coordination of Wednesday’s event, said the idea for the event emerged this summer in the midst of an escalation of violence between Palestine and Israel.

â€œIt was at the height of the war, in which Gaza was being bombed – Gaza is one of the most populous places on Earth,â€ she said. “I have made a commitment with the administration of the law school on how to start authorizing another narrative on Palestine in the law school.”

Khamis said she appreciates El-Kurd’s ability to stay humble in the spotlight while using her public platform to speak openly about critical issues and continue to stand up for ordinary Palestinians.

â€œThe most rewarding part of it is seeing the crowd and seeing how excited people are to meet Mohammed, and also how humble Mohammad is about everything,â€ Khamis said. “He is truly someone who is not changed by the fame given to him and who uses it.”

She said she hopes events centered on Palestinian voices will continue to occur throughout the year.

â€œThis will be the start of many events that we hope to have in law school,â€ she said. “We hope this is a conversation that really starts to allow people to change the narrative and allow people to see the other side.”

As someone who identifies as Palestinian, Khamis said she believes it is her responsibility to publicize the region’s politics, especially in American institutions such as Harvard Law School.

“There is such a shortage of Palestinians in general at a higher level,” she said. â€œAs a Palestinian, I feel like it is my obligation to continually question the narrative. To do this at Harvard is a huge privilege, and we will continue to do so. “

El-Kurd argued that international observers frequently overlook the plight of ordinary Palestinians despite photographic evidence and testimonies of displacement and violence inflicted on ordinary individuals.

He said the Palestinian identity does not depend solely on geography or national borders, referring to the territorial disputes between Palestine and Israel.

El-Kurd said he would continue to remain optimistic about the future and make his voice heard to make changes.

“It is my duty to have hope,” he said. “I remember that I need to hope in order to survive.”

– Editor Emmy M. Cho can be reached at [email protected]

What Albert Camus can teach us about friendship