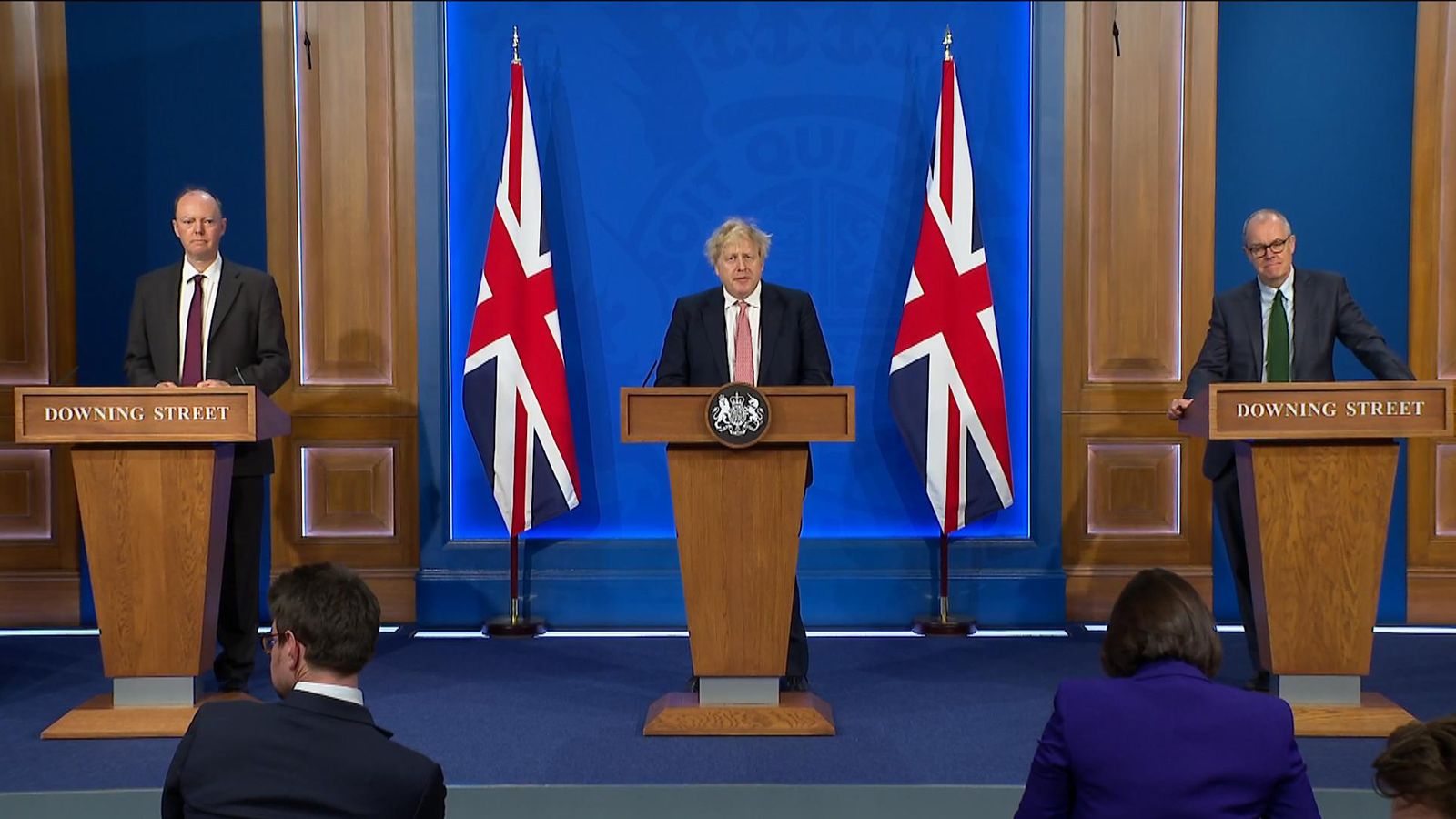 No division between ‘gung ho’ politicians and ‘anxious’ scientists says PM, but it’s a political decision as much as a social decision | Politics News

It dominated his job as Prime Minister, placed him in intensive care, sparked a bitter row and rebellion with his parliamentary party and could – according to the outcome of the Met Police investigation – ultimately cost Boris his job Johnson.

So you can imagine the Prime Minister’s relief on Monday when he announced the end of COVID restrictions.

It offered beleaguered Mr Johnson a rare moment of approval from some of his fiercest backbench critics in the Commons and the chance to display some of his trademark boosterism from a politician who in recent weeks has worn a permanently furrowed brow.

It was, the Prime Minister said, a “time to regain our confidence” as he spoke of the end of restrictions as a “proud moment”.

The public is invited to take personal responsibility

From this Thursday, the legal requirement to self-isolate after a positive COVID-19 test will be removed and free testing for the general public will end on April 1. Financial support for isolated people will also end on March 24.

Read more: What will ‘living with COVID’ mean when coronavirus restrictions end in England?

The Prime Minister has urged the public to take personal responsibility, as the obvious questions about how he can afford to do so if he has neither sick pay for isolation nor access to testing are raining down.

But while the Prime Minister sought to use this moment to project confidence, his scientists chose to tread carefully at the COVID press conference.

Sir Patrick Vallance has warned the pandemic is not over, there could be more serious strains.

Sir Chris Whitty has warned that winters could still be tricky as he urged the public to continue to use sensible precautions, such as wearing masks in enclosed spaces, testing if meeting elderly people and washing their hands .

The different tones were significant because the Prime Minister’s decision to end not just restrictions now, but support around sick pay and free testing in a few weeks, is as much a political decision as a public health decision.

Advisers advise, ministers decide, but in this particular case the Prime Minister has come under sustained pressure from his own party and cabinet to end the COVID laws at a time when his political authority is at an all-time low. . This raises obvious questions about his motives for making these announcements today.

He knows it and went to great lengths at Monday’s press conference to tackle it head-on. When I asked Sir Patrick and Sir Chris if they felt more anxious than confident about the end of restrictions, it was the Prime Minister who answered the question not directed at him.

“On the point of anxiety, I don’t want you to think there’s a divide between enthusiastic politicians and cautious, anxious scientists,” Mr Johnson said.

“We have to face the fact that there could be, probably, another variant that will cause us problems. But I think, thanks to what we have done, in particular with the investment in vaccines, we will be in a much better position to tackle this new variant when it comes.”

And when it comes to scientists, Professor Chris Whitty said he would describe himself as cautious while Sir Patrick said ‘the one thing this virus has taught you is not to be arrogant. We have to go there very carefully, monitor carefully and be ready to react”.

Enough to save the PM?

Mr Johnson will be happy to put the controversial COVID laws behind him – for now at least, although in the short term he must still be extremely worried about whether the police will find he has broken the very rules that he does. he enshrined in law.

For weeks, his MPs have been whispering that a prime minister who has broken the law must surely face a vote of confidence and even have to resign.

But the last few days may have changed that reckoning, as domestic events are overtaken by the very real prospect of a European war. Just as COVID is receding, it is a Prime Minister and a continent that now faces a grim new global challenge.