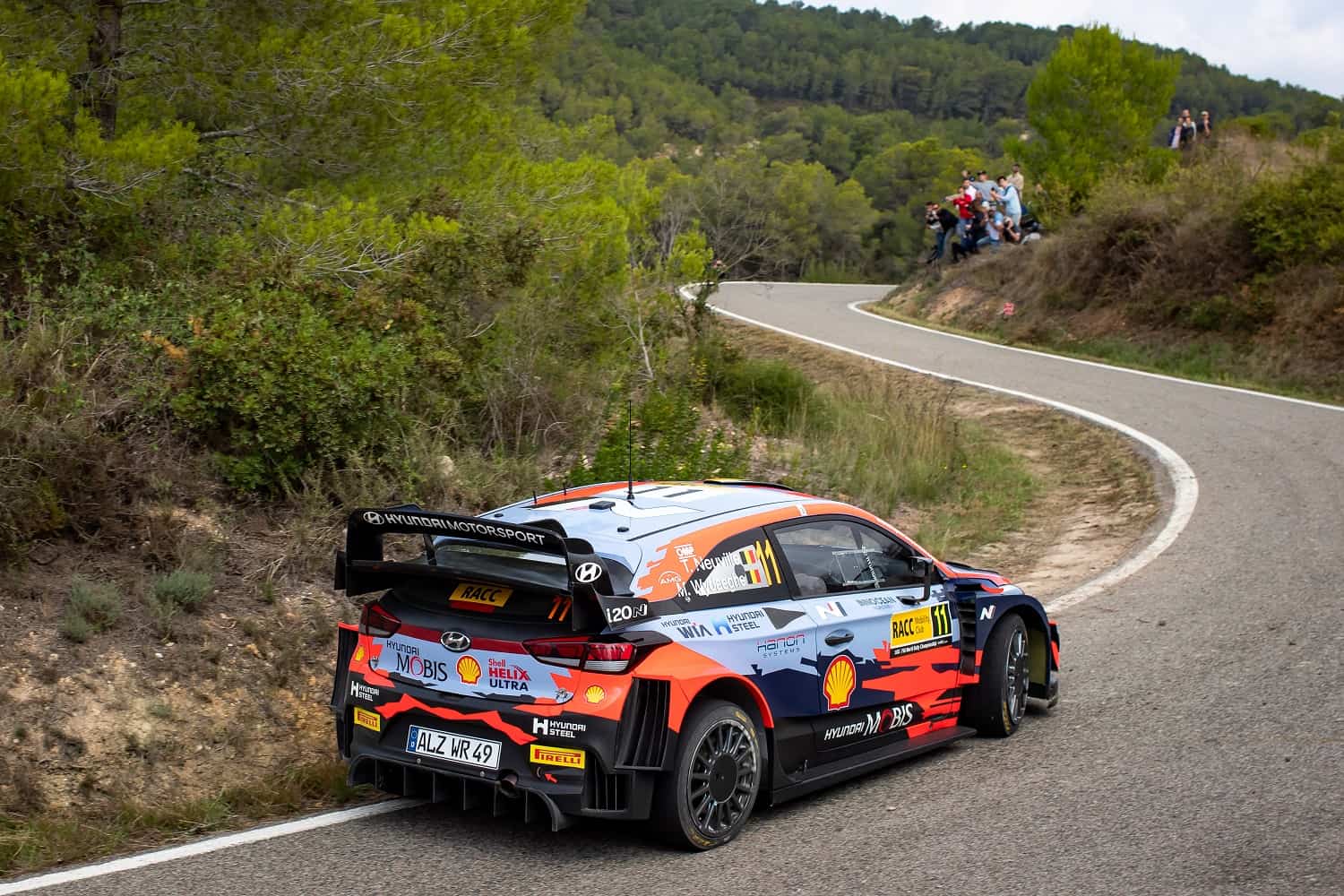 Penultimate round of the 2021 World Rally Championship and everything is up for grabs, the all-tarmac Spanish rally had to be an exciting event, as Toyota Gazoo Racing WRT pursues the constructors and the drivers’ crown while Hyundai Shell Mobis WRT will put it all. implemented to challenge for the title of manufacturers. A sizeable challenge but a matter of never saying die, all the right ingredients for a great rally.

Sébastien Ogier and his co-driver Julien Ingrassia set the pace during Thursday’s shakedown stage with a time of 2: 33.6, just 0.2 seconds behind his teammate and main rival for the drivers’ title Elfyn Evans with her co-pilot Scott Martin. The Frenchman only needs seven points ahead of Evans to win his eighth drivers’ championship.

Evans took the stage 5.1 seconds faster than Neuville with Ogier third at 3.1 seconds. Many riders experienced understeer issues and struggled to find their rhythm.

Toyota Gazoo Racing’s Takamoto Katsuta’s misfortune continued when he hit the Armco barrier near the end of the stage, severely damaging the front left suspension and retiring for the day.

Identical times for Evans and Neuville on Stage 2, but neither driver felt comfortable with their car, but the Welshman still held a 5.1 second lead.

Evans was 7.9 seconds ahead of Neuville after Stage 3, with Ogier third with a quick closing Sordo on his tail. Neuville complains again of understeer and hopes the problem can be resolved at the Salou service park.

These adjustments were a game-changer for Neuville, he won the next three stages, Evans had no response as the Belgian crew dominated the afternoon.

On the penultimate stage of the day, he took 7.9 seconds ahead of the Welshman, finishing the day in first place overall with just 0.3 seconds. Evans was second, Ogier third, Sordo fourth, Rovanperä fifth and Adrien Fourmaux with his co-driver Alexandre Coria sixth.

It wasn’t a big day for Neuville’s teammate Tänak who crashed at the start of Stage 4 as the car left the rally with a damaged chassis.

Saturday morning and the Neuville i20 set the tone, relentlessly widening its lead over Evans, winning five of the seven days of special stages. The roads became more dangerous as a thick fog in the early morning enveloped the district and the visibility of drivers was severely limited.

The end of stage 8 and Neuville’s lead was 6.7 seconds, despite the thick fog. The second fastest car on the stage was Adrien Fourmaux’s Ford Fiesta M-Sport just 1.7 seconds behind.

Neuville took stage 9 and at the assistance point was 9 seconds ahead of this nearest challenger. The third was still Ogier but under pressure from Sordo looking to close the gap in the constructors’ title race at the end of the morning loop the Spaniard was only 0.2 seconds behind. Rovanperä was still fifth and Fourmaux sixth.

Frenchman’s teammate Gus Greensmith fell to ninth after a puncture at the left rear of his Fiesta.

Starting the afternoon loop Neuville took his seventh consecutive stage victory and increased his lead to 11.1 seconds over Evans, Ogier took advantage of the midday service adjustments, when during the stage 10, he widened a gap of 3.2 seconds over Sordo and maintained his third place overall.

Ogier and Neuville shared the honors in SS11 despite the fact that the Toyota driver almost caught up with Fourmaux at the end of the stage. Fourmaux had hit a barrier earlier in the stage and was forced to stop for 7 minutes to make repairs allowing him to limp out of the stage.

The Frenchman had to change a steering arm and remove a drive shaft by the side of the road after stage 11, with the car now effectively having two-wheel drive. At the start of stage 12, the penultimate stage of the day, he had to finish one minute late but at least still in the race.

Evans has had a tough day. It was a frustrating afternoon. We bet to try to change some things to make the car better for the afternoon but unfortunately it didn’t work and we went in the opposite direction. Ogier, on the other hand, seems to have found the balance that he lacked all weekend and won his first victory on stage.

The last stage of the day and it’s another Belgian free kick with Neuville, again the overnight leader of Evans by 16.4 seconds, with Ogier third after a catastrophic final stage.

Only 2.15 km long around the seafront of Salou and 400 meters in the Yaris engine which stalled and it loses 5.7 seconds, it is only 1.2 seconds ahead before the last day .

Sunday morning, last day and early departure for the teams and it is once again a Hyundai which wins stage 14, but on this occasion it is the Sordo i20 which finishes with 0.7 seconds ahead of its teammate Neuville.

The Spaniard’s victory places him ahead of Ogier for third place in the general classification by 0.5 seconds. Sordo has reached his sights and takes stage 15 to increase his lead over Ogier, while Neuville is content with second place on the stage but increases his lead over Evans to 20.6 seconds.

Stage 16 and it is again Sordo who wins the stage 0.7 seconds from Ogier who desperately wants to recover this third place, Neuville is third while Evans finishes sixth three seconds from Sordo’s time but still 15 seconds ahead of the Spaniard overall, is it the Welshman who saves everything for the Wolf power stage and those extra points?

But it was almost a disaster for the Belgian crew when the i20 refused to start and was pushed towards the staging area by co-pilot Wydaeghe with smoke and flames emanating from the exhaust. Fortunately, the Hyundai took the start and the team was able to complete the last stage. Tänak experienced a similar situation ahead of the last stage of this year’s Acropolis Rally.

The kind of finish that Hyundai Shell Mobis WRT was looking for with two podium spots, first and third, but it looks like championship hopes are over for 2021, Neuville drove a superbly judged rally to take the top step and never be mistaken. .

Sordo played the waiting game until the last day when he took third place from championship leader Ogier.

Evans seemed like the man to beat on day one, but he wasn’t as he struggled to find balance in his Toyota Gazoo Racing WRT Yaris, but he still has a chance to win the title with only one rally and only 17 points between him and the current leader Ogier.

The twelfth and final rally of the 2021 WRC season will be the ACI Rally Monza between the 19e and 21st from November 2021. The all-asphalt event will be based on the famous Autodromo Nazionale de Monza racing circuit near Milan.