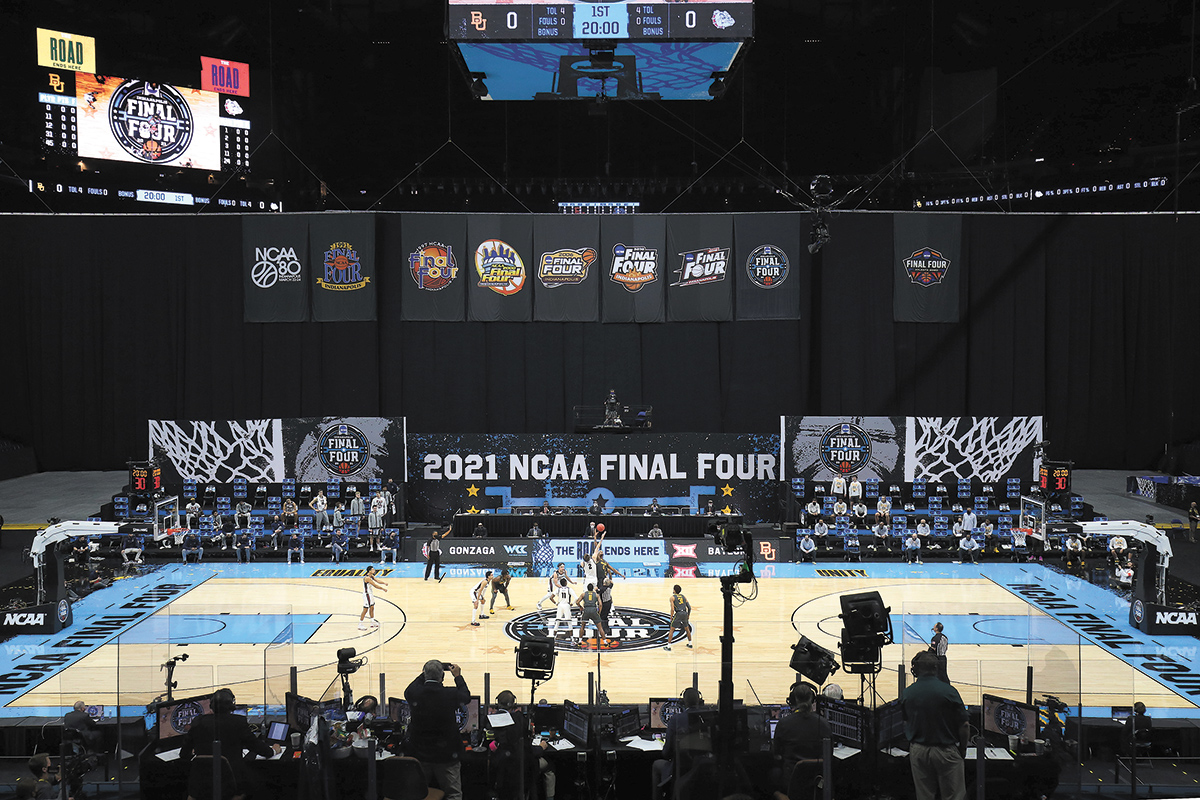 Mike Lopresti: A year later, the writer looks back on the madness of March 2021

A year later, I still remember the expression on the Oklahoma player’s face as they led him out the back door of the hotel, hoping no one would notice. A van to take him out of town was waiting, and here he came, wearing a full face mask and almost a hazmat suit. What a way to leave the NCAA Tournament. But so on, each time the COVID test came back positive.

It’s now been a year since the entire NCAA Men’s Tournament came to town – lock, stock and nasal swabs. Things have changed a bit. This weekend, the Sweet 16 is splashed coast to coast among the major metropolitan areas of Philadelphia and Chicago. San Antonio and San Francisco. Last March this weekend, to see it all, you just had to drive from Bankers Life to Hinkle.

To mark the anniversary, allow some personal memorabilia. I spent months attending NCAA and Indy Sports Corp. meetings as this monstrous and incredibly complicated effort unfolded. For those who made it possible, two harsh realities hovered every day.

#1: The greatest unrelenting threat came from an enemy no one could see.

And #2: The organizers fully understood that if someone got it wrong, the whole world would know about it, and the applause could turn into boos and criticism the time it takes to press a send text button. .

All that, and they succeeded. The wave of mass infection never came. The players did not develop psychosis following the ordeal of spending three weeks at the Marriott. The laundry was done. Tons of that. The teams were fed; 19,000 chicken wings delivered overnight. The tournament has been played. Baylor won.

When the championship game ended, there were massive sighs of relief, and hardly anyone noticed that the usual shower of confetti wasn’t raining down on the Bears. That’s because the confetti cannon went off seven hours too early on the roof of Lucas Oil Stadium. If you had been there at 4pm you would have seen a ton of stuff.

Here, a year later, are some other moments that linger:

How, after the failure of a sponsorship, the persons in charge had to scramble to find the necessary money to pay the parenthesis on the side of the JW Marriott. Can you imagine this month without her?

How the NCAA hatched a plan to get the squad groups to the Final Four because everyone missed them. But doctors crushed that idea like it was a badminton shuttlecock.

I remember the team coming to town straight after winning their conference tournament, and the very first thing the coach wanted to know was where to get a few bottles of wine for a staff party. When he didn’t like the prices advertised by his hotel, he sent for the bottles and brought them up from the lobby on a luggage cart.

I remember meeting one of the NCAA selection committee members walking down the hall of the JW Marriott after midnight. He had crammed so many numbers and metrics into his head that he couldn’t turn off his brain, so he was trying to fall asleep.

I remember when the selection committee came to town in February for meetings and learned firsthand how the bubble would work. Of course, members could eat a St. Elmo dinner. But not at the restaurant. So when their work was done at the NCAA office, it was a bus ride back to the hotel and the food was given to them in a paper bag to take to their room. By the way, all but one of the committee members ordered the shrimp cocktail.

I remember Baylor coach Scott Drew talking about how he waved a flashlight in his hotel room at night so his family could see it and do the same from another hotel a few streets away.

I remember the day someone at the NCAA tournament staff meeting first mentioned Victory Field. They feared that the players had nothing to do in the bubble. They had carefully planned trips to the zoo and Topgolf, but they needed something else. Maybe that nice stadium across the street? The next thing I knew, I walked the warning trail watching the Arkansas Razorbacks throwback clearances and the Winthrop Eagles play pickleball. Baylor had a kickball game where the players beat the coaching staff. The coaches didn’t like one of the referees’ calls. Victory Field changed that.

I remember the hotel bubble. How one team came up with the idea of ​​an ice cream bar on their floor for the players every night, and soon almost every team was doing it. How Gonzaga created a bowling league in the hallways, and UCLA coach Mick Cronin found a spot outside the Marriott, so he could smoke a cigar while watching movies of the next opponent’s match. How an athletic director was closing a house during the week, so he passed the papers through a door at the JW Marriott to sign.

I remember all the greetings from kids in the Indianapolis area handed out to teams, including this one: “I’m not sure Butler will make it to the tournament, but if they do, they’ll beat you. The Bulldogs, you may recall, were not.

I remember Sunday morning when the VCU team had to be kicked out of the tournament, sent home before they could even play a game due to an outbreak of positives. Elevators were installed at the JW Marriott so no one else could use them; team members were rushed into the lobby, through a closed restaurant, on Washington Street where buses with water and packed lunches and extra peanut butter and jelly sandwiches were waiting. Some of those who had helped the Cursed Rams wept as they left.

I remember all the things that players forgot in their hotel rooms when they went to practices or even games. Once an Indianapolis cop had to jump on his motorcycle and race in a jersey to Lucas Oil Stadium.

I remember the Baylor Bears having a karaoke session in their meeting room at the Marriott, and the team in the next meeting room wondering what was going on in the world next door. It would be the Gonzaga Bulldogs. As fate would have it, the two teams destined to play for the national championship were boardroom neighbors from the start. The week before the Final Four, the NCAA hotel host asked the two coaches if they wanted to walk away from each other. The two said no, they got along well.

I remember all the practices at the Indiana Convention Center. The 589th and final was Baylor’s shot in the Championship on Monday. During one session for North Carolina, an unthinking volunteer donned a Tar Heels shirt and walked onto the practice field to take a selfie, much to the chagrin of Roy Williams and the horror of the organizers. In another, practice at UCLA lasted so long that the supervisor of that ICC area marched workers onto the field to remind the Bruins they had to go. Another team had to arrive and the pitch had to be disinfected.

I remember all the emails and phone calls from health officials monitoring the tournament in every way possible. They had seen on TikTok an image of teams too close in a hotel. Fix it. They had seen happy winning players spraying each other in their locker room on TV. This water wasn’t from bottles that had been used for drinking, was it? Match organizers therefore began to creep into the locker room in the second half to put water bottles near the players’ chairs, not to drink but to spray. A television image suggested the chairs on the team benches were too close together. Were they? An NCAA staff member had to go and measure them to make sure they were really 7 feet apart.

I remember how empty the Marriott felt during Final Four week. How strange the atmosphere was downtown. At a time when excitement would normally build to host a Final Four, it was all over, with 64 teams gone and the threat of infections diminishing. Gonzaga’s coach Mark Few compared him to “the grass blowing, and no one for miles around.”

And I remember the Tuesday morning after. The tournament played, the action accomplished. Baylor’s last stop was to pose in front of the JW Marriott support, but just before the photo was taken, the Bears realized the championship trophy had been left in the room. Someone ran to retrieve it, so the picture could be taken. Then the Bears departed for their victory parade in Texas, and all that remained for Indy were the memories and the sense of accomplishment.

Lopresti is a lifelong resident of Richmond and a graduate of Ball State University. He was a columnist for USA Today and Gannett newspapers for 31 years; he covered 34 Final Fours, 30 Super Bowls, 32 World Series and 16 Olympics. His column appears weekly. He can be contacted at [email protected]