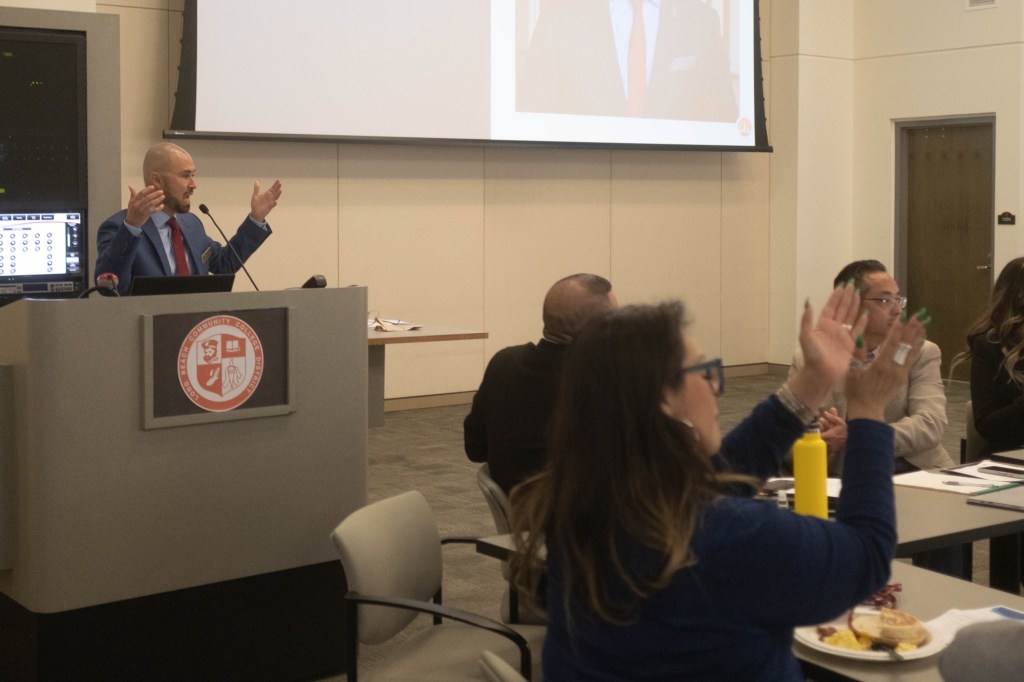 Long Beach politicians, academics and leaders of local organizations sought to understand how they can best address the post-pandemic economic struggles of the city’s Latino community at a roundtable discussion Friday morning, March 18.

They met at Long Beach City College for the discussion, a precede to this year’s Latino Economic Summit, where researchers will release a new Latino Economic Impact Profile Report around October, said Seiji Steimetz, a professor and chair of economics at Cal State Long Beach.

At the roundtable discussion on Friday, academics from Cal State Long Beach and representatives from Centro CHA, a nonprofit serving Long Beach’s Latino community, recapped the pre-pandemic conditions of Long Beach’s Latino residents and some initial data on how the community was affected by COVID -19.

CSULB and Centro CHA also announced they are creating a new survey to better understand how Latinos were affected by COVID-19, which, Steimetz said, would be used to inform this year’s economic impact report.

“It’s important to bring in the research arms of the university,” Mayor Robert Garcia said at the event, “of the community college, of folks that are doing this work to produce this report.”

Garcia, who made a brief appearance at the event, was there with other local politicians, including Vice Mayor Rex Richardson and Councilmembers Mary Zendejas, Roberto Uranga and Suely Saro. Other city figures, like LBCC Superintendent-President Mike Muñoz, Long Beach Police Chief Wally Hebeish, Health Director Kelly Colopy and Port of Long Beach Executive Director Mario Cordero, were also there.

Over breakfast and coffee, those figures talked about economic issues Latino people face and some policy solutions.

Researchers brought up how Latino folks work efficiently in the service industry, such as retail, hospitality and food service. The median household income for Long Beach’s Latino residents, according to 2019 census data, was $54,066, about $10,000 less than the citywide median.

That’s about 14.2% lower than the city’s overall median household income, Steimetz said during a presentation.

Those pre-pandemic numbers signal a worry that the pandemic particularly hurt Latino people economically, especially since COVID-19 disproportionately affected that community, said Megan Anaya from Centro CHA. During a presentation, she cited data from the city’s Health and Human Services Department that showed ZIP codes with the highest number of COVID-19 cases were predominantly Latino neighborhoods.

“We have the opportunity to address these (issues) with policy,” said Juan Benitez, a CSULB professor and president of the Long Beach Unified School District’s Board of Education.

To help create policy solutions, Steimetz unveiled a new online survey that would help researchers better understand how Latinos were affected by the pandemic. Among other questions, the survey asks, “Have you been vaccinated?” and “Did you stop working during the pandemic?”

The goal, Steimetz said, is to get 500 respondents, and he asked local politicians and nonprofit leaders to help distribute the survey. The plan, he said in an interview, is to get the survey up and running in about one-to-two months.

“These roundtables help us understand how we got here,” Zendejas said in an interview, and “where we’ll go from here.”

Humanity is one minute away from midnight