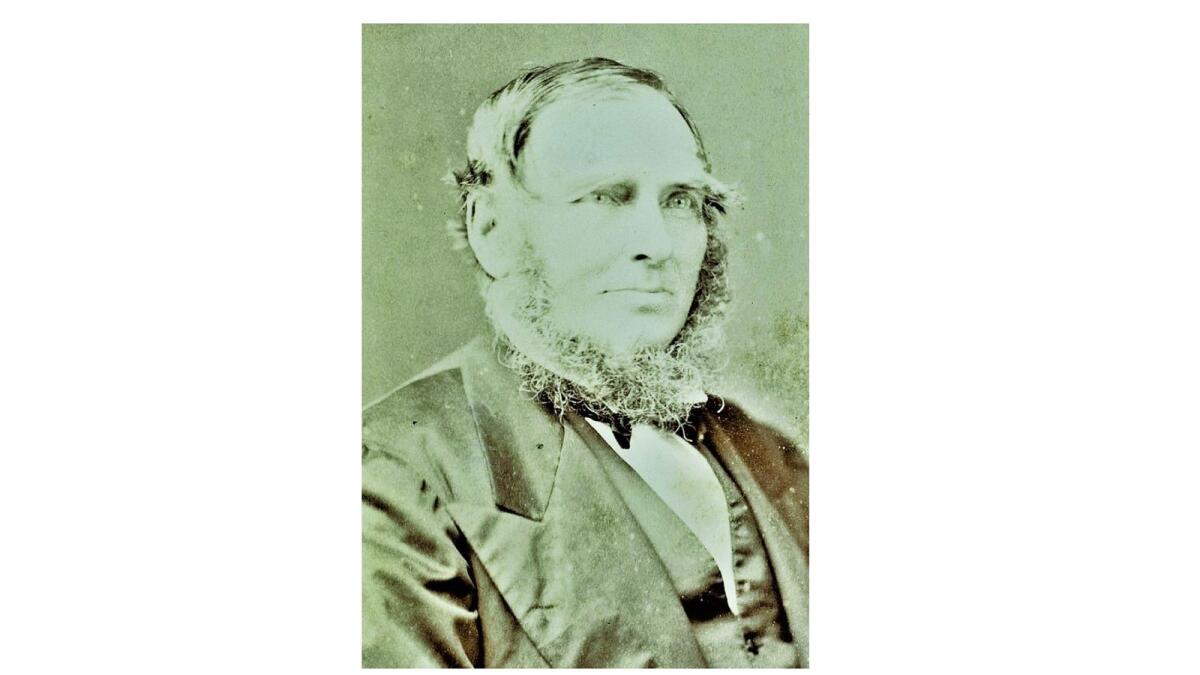 In this week’s Times Past column, historian Jonathan Smyth returns to an earlier topic from 2018 – Charles Moore, draper and politician…

The photograph may sound vaguely familiar to those who remember my first column on “Charles Moore: Draper and Politician,” in Times Past in October 2018. Recently, I was fortunate enough to receive what was for me a unpublished account of the business-minded politician from Cavan, and I found the account worthy of another column.

To recap, Moore, aka “the Honorable” Charles Moore, had been elected Mayor of Sydney three times and the city’s Moore Park was named after him. Charles was from a large family, born to James and Catherine Moore; he had eleven siblings and the family lived in Ballymacarne (Ballymackinroe), in the parish of Annageliffe. Charles worked in various drapery establishments, including for a time as an apprentice in his brother William’s shop in Cavan town and became a buyer for a large trading establishment in Dublin, and spent his time in the trade of the drapery in London. I would like to thank Mr. Philip Dent for the information.

The account that follows, I hope, will add a little more substance to the story of Moore’s life. When Charles Moore died on July 4, 1895, an old “acquaintance” who had known him for about 40 years, sat down and put pen to paper, producing a short biography of his friend which was published in the Napean Times, Perth, in July 20, 1895. Moore on his arrival in Sydney opened a small store on Pitt Street. Famously, it stocked Berlin wool at a much lower price than other competitors, which would have amazed “the ladies” a lot. Berlin wool having made a name for itself, Moore needed a larger store which he opened in the same neighborhood.

Another stroke of luck was the discovery of gold nearby and with the opening of the gold mines, Moore began importing larger quantities of clothing “through his connection in the mother country” to meet the needs prospectors’ clothing. Then he bought an auction house in Charles Newton, Pitt Street, from where he held auctions of clothes and boots, clearing thousands of pounds of goods, ‘sold under the hammer’ in a few hours only.

Around 1857, Foss’ wholesale drugstore, next to Moore’s auction house, caught fire and threatened to destroy everything around it. Everything about Foss’s was wiped out and Moore, then living above the auction rooms, heard the din, jumped out of bed and grabbed an ax with which to open a side door into the Foss premises, as he had heard that barrels of naphtha (crude oil) and other dangerous “flammables” were stored there. If these were to catch fire, much of Pitt Street would have been demolished in the blast. Firefighters arrived, but none, including bystanders, seemed eager to lend a hand to help Moore remove the barrels. Moore, selflessly and at great risk to his life, walked into Foss and pulled out several of the heavy barrels. Soon the others joined in and their action saved Moore’s premises and prevented Foss from exploding. As a reward for the firefighters and helpers, Moore ordered them two gallons of brandy from Toogood’s Tavern down the street.

At one point, Mr Foss pulled into his car, watched the flames for a moment and then drove home. Foss later claimed ‘several thousand pounds’ from insurance companies but Moore, who had worked hard to save the street, only sought £1,500 but had to fight tooth and nail as the one of the insurance companies refused to pay him. Eventually, a settlement was reached and Moore received much larger and deserved compensation.

In February 1881 Moore’s return visit to Cavan town, which had taken place some years earlier, was remembered in the Cavan Weekly News which reported that he still had family in the Cavan area. Having become a successful businessman and politician in Australia, the kind gentleman, on his visit, generously gifted the Church of Ireland in Cavan with an ‘excellent’ organ at a cost ‘over’ £400. The story appeared in the newspaper on the occasion of his appointment as a member of the Legislative Council of the Colony of New State Wales.

Not only did he have a civic and business career, the newspaper said, but Moore also always welcomed emigrants from his “native county” arriving in Australia and, being a hospitable host, invited them to call upon him when they were able to do so. so. The Napean Times called him a Trojan horse for work, a huge physique and a man of integrity in business life.

When he first settled in Springwood, it was a backwater without a church, cemetery, or school. With characteristic enthusiasm, Moore purchased land in the center of the village where he built a school with stone walls. Soon after, ‘aided’ by the government and members of parliament, he obtained land for public amenity use, e.g., Sassafras Park, Lomatio Park, Recreation Grounds and Springwood General Cemetery .

Charles Moore has been said to be kind and an example of his kindness was the way he treated the nanny to the family who raised him as a child in Cavan, whom he granted a ‘comfortable annuity’ and when she moved to New South Wales, he continued to pay the allowance until his death at the age of 107.

Moore was a giant among the Irish community who called Australia home.

Assassination attempt on a vicar in 1839

Inspired by the life of Dr Kumud, this writer writes Kumudini: The Tribune India