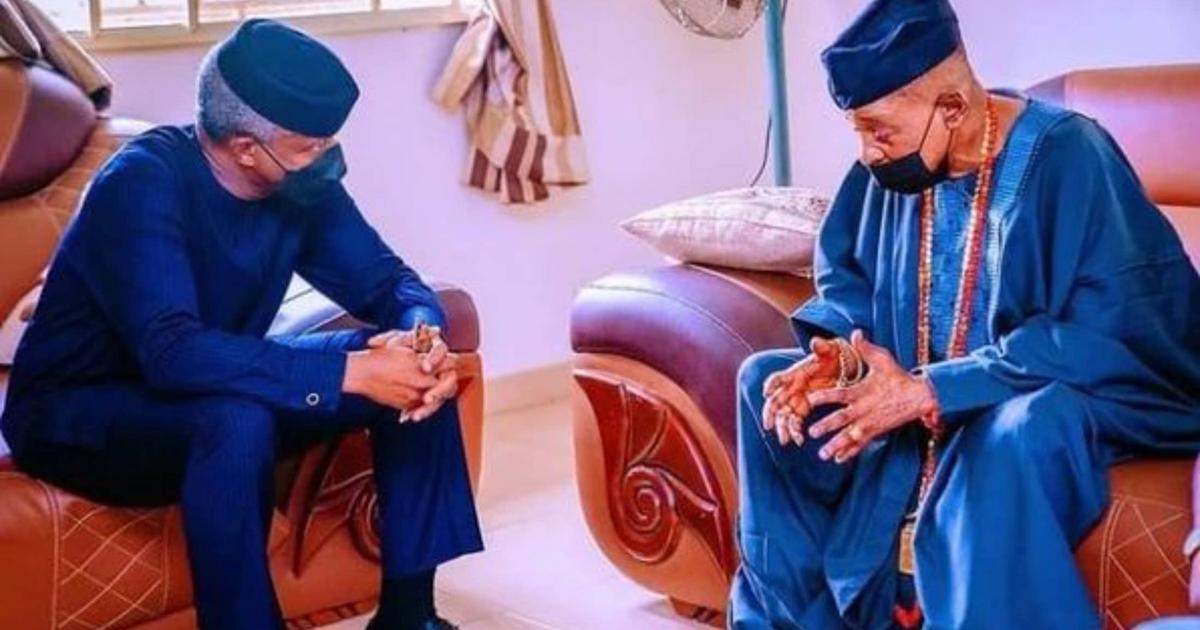 Late Alaafin of Oyo was “a philosopher king” – Osinbajo

The vice president said he shares the same heritage with the late traditional ruler – the heritage of a great Nigeria.

He said he came with the warm greetings of President Muhammadu Buhari and his special condolences on behalf of the government and people of Nigeria.

“And he says he thinks he’s one of the most outspoken men he’s ever met; I bring you my condolences.

“I mean Kabiyesi was in the mold of a philosopher king; a man of great intelligence and depth; he was not just a king; he was also a philosopher.

Osinbajo said that the Alaafin has made useful contributions on the concept of the rule of law and that of the separation of powers.

He said that the late Alaafin postulated that the concepts originated from the Oyo Kingdom system of government.

“In fact, one of the very important contributions he made to the constitutional history of Nigeria was his assertion that the concept of the rule of law and the separation of powers, made popular by people like Dicey and Montesquieu , was actually born the system of government in Oyo State.

“The relationship between the Alaafin and the Oyo Mesi; and it was the first example of the concept of separation of powers and the concept of the rule of law.

“And his assertion was correct because Oyo Mesi preceded Dicey.

Osinbajo said he would miss his interactions with Kabiyesi; the arguments, disputes and conversations they had about political history, about political economy, about restructuring and various other ideas and concepts that Kabiyesi made.

He said the late traditional ruler had made well-researched and sound contributions on various issues.

“Many times when Kabiyesi spoke, he didn’t just express his opinion; his opinions were well documented.

“And he’ll tell you he argued with himself before he argued with you because his opinions are always so well expressed that you’ll be lucky but to come up with much better arguments if you’re even going to have the slightest chance in conversation.

“Kabiyesi was a most learned person; one of the things you will remember every time you meet Kabiyesi is that he is one of the greatest intellectuals our society has produced.

“But I’m very happy that he also had the zeal to write his own; to write his opinion so that future generations will benefit from his great erudition and his intelligence.

He said Nigeria would miss a great Nigerian, a great monarch, a man who was outspoken and always spoke the truth.

“He will be missed by all of us and I pray that his memory will remain blessed,” he said.

The Vice President, after signing the condolence book, visited and offered his condolences to the late Alaafin’s wives.

Rich tributes pour in for M. A. Muhith, the most honest politician