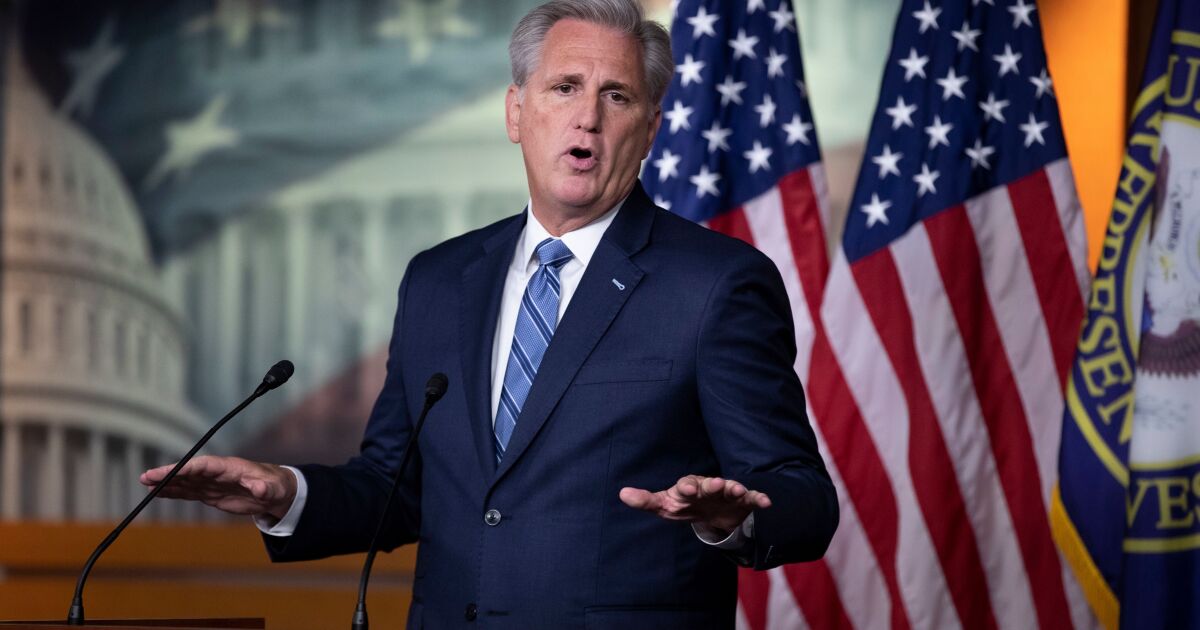 For the editor: It should be obvious to anyone who thinks clearly about what House Minority Leader Kevin McCarthy (R-Bakersfield) stands for, the quest for his own political power, whatever the cost to the nation. He may be good at fundraising and good humor for ordinary people, but shame on those who fall for this clever political ruse while failing to recognize the harm it does to our democracy. (“Ambition keeps him loyal to Donald Trump. But what does Kevin McCarthy represent?October 27)

McCarthy said in one of his speeches that “Biden has launched an assault on the soul of America.” McCarthy has been a willing participant in the Republican assault on the American soul for years. He represents the kind of lying, self-serving political operative most Americans have always said they despise. Even that contempt gave way to tribal loyalty and truth denial in the Republican base.

McCarthy and Senate Minority Leader Mitch McConnell (R-Ky.) may hold their party factions together, but they fail to set standards of integrity and decency for the nation. Unless their constituents and the vast majority of voters reject these corrupt politicians, our experiment in democracy is doomed, and soon.

For the editor: Shame on the Times for running a front-page caption that calls McCarthy “probably the next speaker in the House.” With that, the Times has set its sights on other mainstream media that can potentially have a corrosive effect on voter turnout by making such assumptions.

It also ignores the fact that most registered voters are either women, youth, or people of color, most of whom are quite unhappy with what the Republican Party stands for (or doesn’t stand for). I remember Yogi Berra’s famous words, “It’s not over until it’s over.”

I also note that this “potential leader” with 18 years in Congress did not even respond to a Times request to be interviewed for this article. It’s not hard to understand from a man who hasn’t been associated with any historic legislation but now wants to lead a rudderless party.

For the editor: Gospel of Mark, chapter 8, verse 36: “For what use is it for a man to gain the whole world and lose his soul?

Too bad the Republican Party doesn’t have some sort of religious foundation — like, say, the evangelical movement — that would give it some insight into morality.

For the editor: Your article shows how McCarthy may have once been qualified to be Speaker of the House, but now he’s someone whose only priority is to become Speaker. His Faustian bargain will drive the House into the executive branch if former President Trump wins re-election.

The House would not be part of a separate branch of government; he would not seek to monitor Trump’s actions; it would simply act to allow Trump.

With Trump clearly a man of autocratic tendencies who sees democracy as an obstacle, McCarthy may well be inviting the fox into the henhouse.