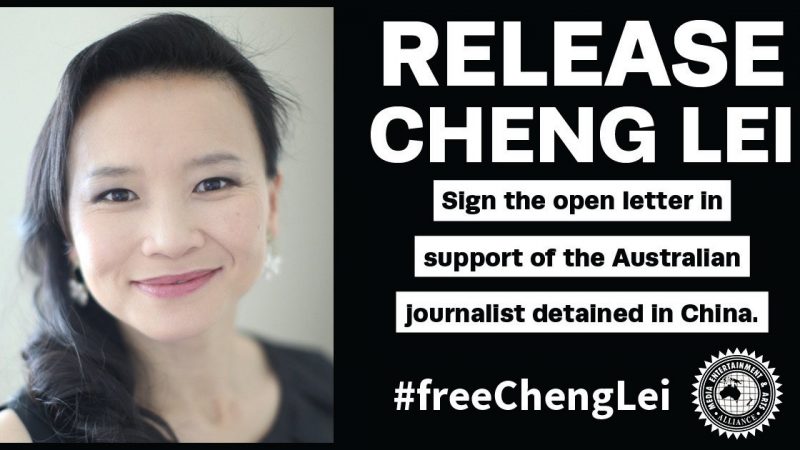 Media groups are urging the public to sign an open letter calling for the release of Australian journalist Cheng Lei. Source: AEM

At least 50 journalists and media groups in Australia have signed a letter urging the Chinese government to release Australian journalist Cheng Lei.

Lei was arrested on August 13, 2020 in China on suspicion of illegally providing state secrets abroad. Prior to her arrest, she was a business reporter working as a television presenter for the state-run China Global Television Network (CGTN).

She was arrested amid escalating diplomatic tensions between China and Australia over the coronavirus pandemic and human rights concerns.

After a year of detention of Cheng Lei, the Chinese authorities have still not presented any evidence against the journalist.

This prompted former colleagues of Cheng Lei in Australia to write an open letter to Beijing calling for the journalist’s release.

We are confident that she has done nothing wrong and are very concerned for her health, safety and care during her current detention.

We are concerned about the crippling effect his arrest is having on the practice of journalism, which has never been so critical.

I signed this letter calling on China to #freechenglei because no evidence has been presented that she did anything wrong, there is no transparency in the system holding her back and because journalists should not be arrested if they have not violated no law. Thank you, @annelisenews. https://t.co/WRzb4LuhRy

The Australian Media, Entertainment and the Arts Alliance (MEAA) is among the signatories of the letter:

Her arrest, detention and the charges against her have never been explained. No evidence was presented. After 12 months, there is no indication that she did anything wrong. MEAA members and journalists from around the world stand with Cheng Lei.

This makes her one of many journalists detained in China as the Chinese government expels foreign correspondents or denies them entry, thus suppressing press freedom.

China tried to make Cheng disappear, but the world has not forgotten her and the dozens of other journalists wrongfully imprisoned in China.

It has been a year since my friend and former colleague Cheng Lei was detained by the CCP.
She is from Melbourne and has 2 children who haven’t seen or spoken to her for a year. As journalists, we are concerned about the deterrent effect of his arrest on international journalism. #freechenglei pic.twitter.com/DSHvSLW9ML

Cheng Lei’s friends call on China to show compassion by reuniting the journalist with her two children in Australia. Cheng Lei has had no communication with his family and is not authorized to receive visitors except Australian consular officials once a month.

Remember my friend Cheng Lei on the anniversary of her arrest. Gorgeous, fun, brilliant and talented ~ hoping she is soon reunited and home with her 2 children #FreeChengLei https://t.co/aVglK9GlbX

If convicted, Cheng Lei faces a prison term of at least five to ten years.

“The Resistance has only just begun”: Ahmad Massoud, son of an assassinated anti-Taliban fighter, calls for support | World news