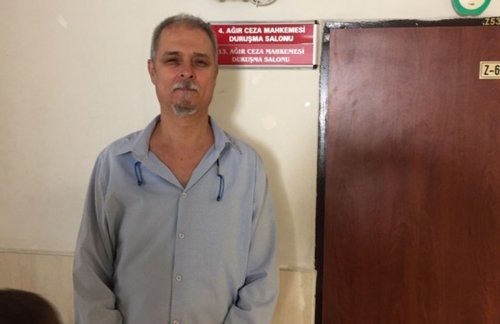 Journalist Mahmut Oral was acquitted of “knowingly and willfully aiding an illegal organization” at the first hearing of the case.

A complaint was filed against him for having been a member of the board of directors of the SarmaÅŸÄ±k Association for the fight against poverty and sustainable development, which was closed by a decree-law because of his alleged “links with the terrorism”.

At the hearing, Oral denied the allegations, saying the association would work to fight poverty without discrimination.

Oral’s lawyer, Mehmet Emin Aktar, said the association was “the best thing that has been done in DiyarbakÄ±r”. The association was founded under the laws and was closed by a statutory decree without a court ruling, he noted.

Oral was involved in the work of the association because he was a member of the board of directors of the Southeastern Journalists’ Association (GGC), he said.

Aktar also said that the list of people the association will provide assistance to has been sent by elected village and neighborhood chiefs, the lawyer added.

Noting that a criminal link between his client and the association could not be proven, Aktar said that the reason for the allegation against the journalist was that the association was closed by a statutory decree. This would violate the principle of individuality of criminal responsibility, he added.

In rendering its judgment, the 4th Criminal Court of DiyarbakÄ±r acquitted the journalist.

Hundreds of NGOs and media organizations were shut down by statutory decrees during the state of emergency declared following the 2016 coup attempt. (KÃ– / VK)