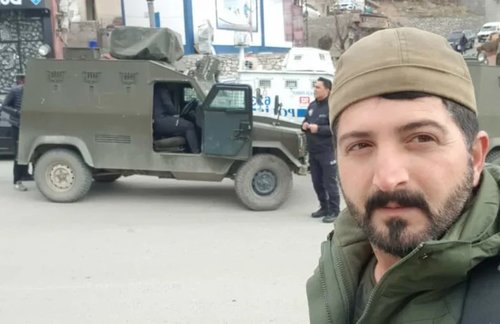 Journalist Mimar Kaya was briefly detained in the predominantly Kurdish-majority Hakkari province of Turkey yesterday (December 5) after filming road rage between special ops police and the driver of a vehicle providing intra-urban transport services to staff.

Police prevented Mimar Kaya, the Hakkari-based news site ColemÃªrg grant holder and reporter for Ä°hlas News Agency (Ä°HA), from filming the incident. Placing the journalist in custody, the police cited “the expiration of his press card” as the reason for the detention.

In the video he took before he was detained, Kaya recounted what happened in the following terms:

â€œI am now being held on the grounds that I filmed road rage between the intra-city minibus and the special ops police on the highway. Because I filmed the argument that followed, I was told “You cannot film” and I am now detained and have continued to wait by the police for almost an hour.

â€œI’m waiting because of the press card and the criminal record check. Even though my press card is active, they made me wait for hours on the grounds that the press card has expired and is obsolete. A tragicomic incident; that’s where Turkey is. “

Taken to the police station, journalist Mimar Kaya was released the same day after giving his statement.

Circular to “protect the police”

The General Directorate of Security issued a circular on April 27 banning the recording of voices and images during demonstrations. The Istanbul branch of the Association of Progressive Lawyers (Ã‡HD) revealed the circular issued by the signing of the Director General of Security, Mehmet AktaÅŸ.

With this circular, the police were tasked with preventing people from capturing the images or voices of police officers during protests and from taking legal action against those affected.

The circular argued that the publication of the voices and recorded images of police and civilians “violated the privacy of privacy,” adding that the capture of voices and images also impeded the performance of duty.

The circular drew strong criticism against journalists and journalistic organizations as well as opposition politicians. Legal action has been filed against the circular, demanding an end to its execution and its annulment.

On November 11, 2021, the 10th chamber of the Council of State unanimously suspended the execution of the police circular prohibiting journalists and citizens from recording audio and video recordings during public incidents.

In its judgment, the Council of State underlined that the related circular restricted freedom of communication and of the press, concluding that fundamental rights and freedoms should only be restricted by law.

The Council stressed that “imposing restrictions on fundamental rights and freedoms by a regulation in the form of a circular from the Directorate General for Security was not in conformity with the Constitution”. (HA / SD)