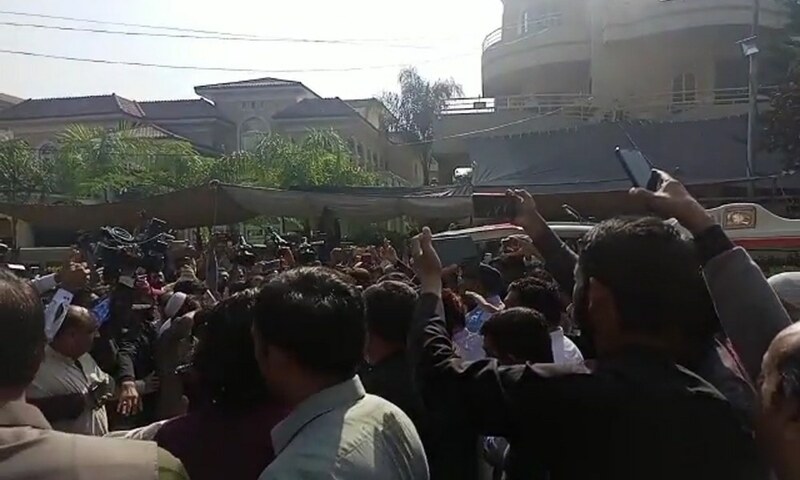 Dozens of people, including members of the media fraternity, attended his funeral prayer. He will be buried in the H-11 cemetery in the federal capital.

Security around the Shah Faisal Mosque was tightened ahead of the funeral, with around 3,800 security guards deployed.

Sharif died after being shot in Kenya, his death raising questions about the incident and the authenticity of Kenyan police claims.

In a report, The starin Kenya, had quoted local police as saying that Arshad had been shot dead by police in a case of “mistaken identity”.

The report adds that the incident happened on Sunday evening along the Nairobi-Magadi highway.

“Arshad was shot in the head and killed by police after he and his driver allegedly breached a roadblock which had been set up to control motor vehicles using the road,” according to the report by The star added.

“According to police, at the roadblock there was a call for police to intercept a car similar to the one Arshad was driving, following a carjacking in the Pangani area of ​​Nairobi during of which a child was taken hostage.”

The report further states that a few minutes later, Arshad’s car appeared at the roadblock and they were stopped and asked to identify themselves.

“They reportedly failed to stop and drove past the roadblock. This sparked a brief chase and gunfire which left Arshad dead. Their car rolled over and his driver was injured and taken to hospital. “

Reactions to his murder

Back in Pakistan, members of political and media fraternities did not digest Kenyan police claims and called for a full investigation amid heightened political tension in Pakistan.

His death prompted several press conferences and announcements, the first of which was by the head of Pakistan’s spy agency, Lt. Gen. Nadeem Ahmed Anjum, head of Inter-Services Intelligence (ISI).

“Arshad left for Kenya when his Dubai visa expired”

DG ISPR said the Khyber Pakhtunkhwa (KPK) government issued a letter on August 5 on the direction of Chief Minister Mahmood Khan which stated that a splinter group Tehreek-i-Taliban Pakistan (TTP) was seeking to target the journalist.

“On August 10, Arshad left Peshawar airport for Dubai. He received a full protocol from the KPK government.

“Arshad remained in the United Arab Emirates until he had a valid visa. He left for Kenya when his Dubai visa expired.

DG ISPR said no one forced the journalist out of Dubai at government level, questioning who exactly forced him to leave.

Meanwhile, Prime Minister Shehbaz Sharif announced that a judicial commission would be formed to investigate the journalist’s murder.