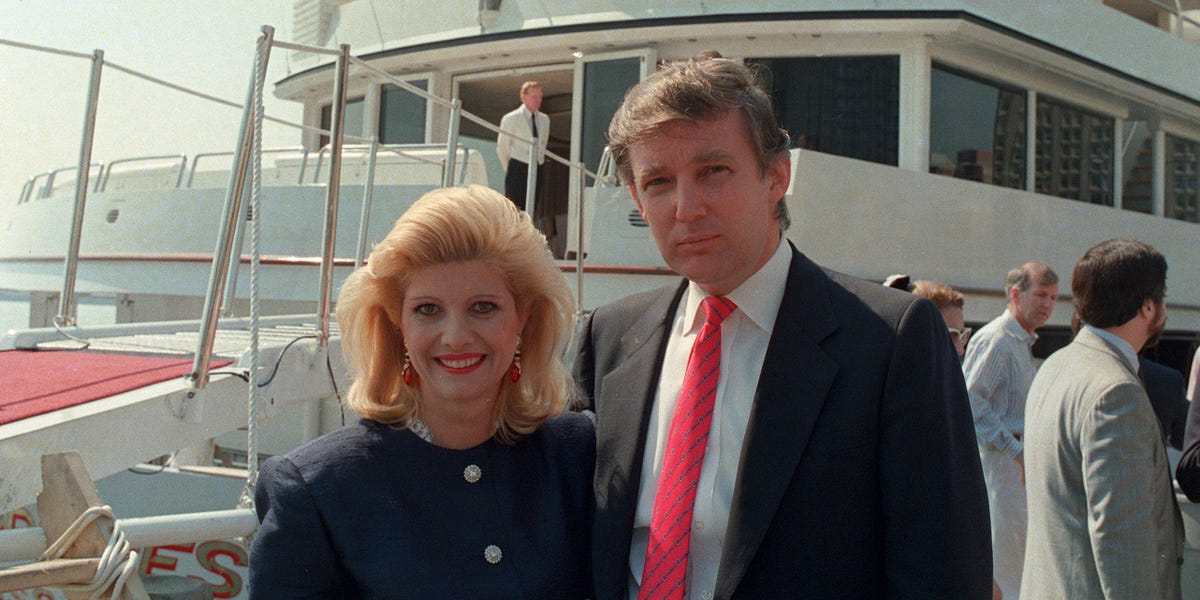 Donald Trump’s first wife, Ivana Trump, distanced herself from politics and mostly stayed out of the spotlight when her ex-husband became president.

On Thursday, she died in her New York apartment at the age of 73, her family announced.

“She was a wonderful, beautiful, incredible woman who led a wonderful and inspiring life,” Donald Trump said in a post on Truth Social.

Over the years, the former president’s ex-wife had shared heartfelt thoughts on Donald Trump – both as husband and father of their three children and his controversial tenure as the nation’s leader.

In 2017, she wrote a book about her 14-year marriage to Trump – the second of four husbands throughout her life – and their three children, Ivanka, Eric and Donald Jr.

Trump as a politician

As the first wife of a businessman-turned-president, Ivana Trump said she spotted Donald Trump’s political career before it happened.

“Probably five years before our divorce, Reagan or someone else brought her a letter and said, ‘You should run for president,'” she said. The New York Post in 2016.

“So he was thinking about it. But then…there was the divorce, there was the scandal, and American women loved me and hated him,” she said.

Their divorce in 1992 followed Trump’s affair with Marla Maples, then 26, who would become his second wife.

“So there was no way he would get into [politics] at that time,” Ivana added. “But he was still working with the idea.”

Since Trump became president in 2016, Ivana has said she has acted as an adviser during his administration and said he offered her a job as ambassador to the Czech Republic, although she turned it down. offer.

“We talk before and after appearances and he asks me what I was thinking,” Ivana Trump said in the interview with The Post. She said she told him to “be more calm”, but “Donald can’t be calm… He’s very outspoken. He just says it like it is.”

“He’s not a politician. He’s a businessman,” she added. “He knows how to talk. He can give an hour-long speech without notes… He’s direct.

Ivana, an immigrant from the Czech Republic, was also a supporter of Trump’s immigration policies.

“As long as you come here legally and find a decent job…we need immigrants. Who’s going to vacuum our living rooms and clean up after us? Americans don’t like to do that,” he said. she told the Post.

She did not always support his political career, however.

In a 2018 interview with Page 6 before Trump’s failed 2020 re-election bid, Ivana suggested that “he should just go golf and enjoy his fortune” instead.

Trump as father and husband

After a nearly 15-year marriage, the two separated in a very public divorce in 1992 where she accused Trump of rape, according to the New York Daily News. But later she backtracked on her statement, adding that she had been ‘raped’ by him but did not mean it ‘in a literal or criminal sense’.

In court documents, she also said Trump was verbally abusive and “cruel and inhumane,” the New York Daily News reported in 2016.

Twenty-five years later, Ivana wrote a memoir, “Raising Trump“, which was published in 2017.

“I believe the credit for raising such great children is mine,” Ivana wrote. “I was responsible for raising our children before our divorce, and I had sole custody after the separation.”

“I made the decisions about their education, activities, travel, childcare and allowances,” she continued. “When everyone finished college, I said to my ex-husband, ‘Here’s the finished product. Now it’s your turn. “”

In a interview with Page Six in 2018Ivana Trump said she would prefer her children not be involved in the political sphere, adding that she was grateful that Melania Trump was in the White House in her place.