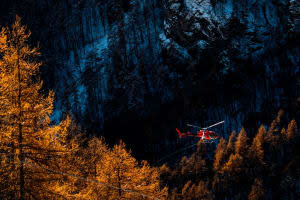 A missing Italian toddler was not found by one of the 1,000 police, Alpine rescuers, firefighters and volunteers who were looking for him – he was discovered by a journalist sent to report on the case.

The 21-month-old boy was last seen by his parents on Monday evening, and on Wednesday journalist Giuseppe di Tommaso of the Italian public broadcaster Rai went to interview them. They live in an isolated area of â€‹â€‹Palazzuolo sul Senio, near Florence, and Di Tommaso had to take a long dirt road to get to their home. On the way, Di Tommaso heard a strange noise coming from a ravine and called.

He heard a child say “Mom,” and could see through the brush that there was a little boy in the ravine. Di Tommaso called for help from a police car and a commander came down to investigate. It was the missing boy, with a few scratches and a lump on his head. Commander said at a press conference that it was “an immense joy to bring him back to his mother’s arms”. The boy was found just over a mile from his home, and police believe he woke up in the middle of the night on Monday and let himself out of the house.

‘No one will be spared’: Georgia election officials reportedly received ‘torrent’ of threats from Trump supporters

US politicians bicker over Microsoft