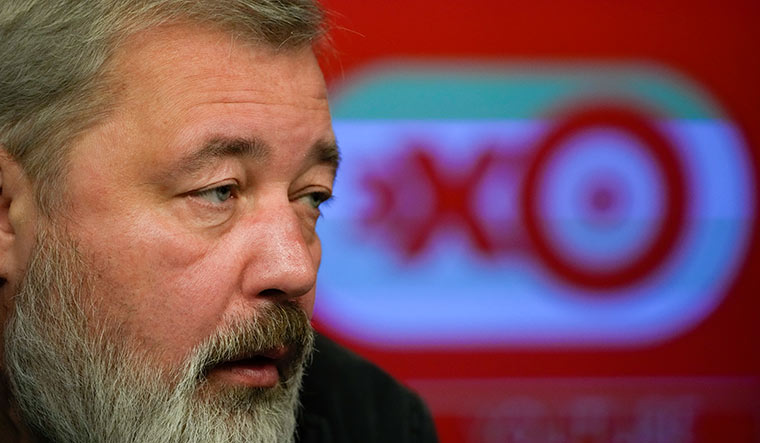 Q / Six of your colleagues were murdered for their work. The announcement of the Nobel Prize came just one day after the 15th anniversary of the assassination of your colleague Anna Politkovskaya.

A / The Nobel Prize is not awarded posthumously. I think this award should belong to those who risked their lives and were killed while doing their jobs. Their life and death is the real fight for freedom of expression. I am not the recipient of this award, but my wonderful colleagues are.

Q / After the Politkovskaya murder, you said you wanted to shut down the Novaya Gazeta, and no story was worth dying.

R / I wanted to close the newspaper, because I failed to protect my employees. I put Anna in danger, but it’s a common guilt. However, I am not the only one to direct the newspaper, we have an editorial board, which makes the decisions.

We argued a lot, we argued, but no one supported me. Our reporters said that we were not allowed to shut down the newspaper. So, now we have to do the investigation on our own and continue to do what Anna did: help the people for whom the Novaya Gazeta is the last hope.

Q / Do you remember the early days of the Novaya Gazeta? What about the support you received from Mikhail Gorbachev and Alexander Lebedev?

R / I met Mikhail Sergeyevich Gorbachev in 1989, while working at Komsomolskaya Pravda, the most widely distributed newspaper in the Soviet Union. I had gone to interview him. Our friendship started there.

Gorbachev was the first shareholder of the Novaya Gazeta – he bought the first ten computers from us in 1993 – spending part of his 1990 Nobel Prize money. The first cell phone was presented to our editorial staff by his wife, Raisa Maksimovna Gorbachyova. I consider Gorbachev to be an exceptional person, a politician and a defender of peace.

Now of course I’m proud that we have something in common [with the Nobel Prize]! In writing, they joke that I’m only the second [with the prize]. Yet the Novaya Gazeta is the only periodical in the world with two Nobel Prize winners. We regard Gorbachev as our friend, founder and shareholder. He owns 10 percent of our shares.

As for Aleksandr Lebedev, we got to know each other in the early 2000s, when he was a deputy in the State Duma. Later he became a businessman and an oligarch. In 2006, he bought back 49 percent of our shares (39 percent alone and 10 for Gorbachev; 51 percent of the shares have always been owned by staff).

Lebedev literally saved us. Newspapers have never been a profitable business in Russia. We have always had problems with advertisers. In our country, advertising is a political matter, but we have never taken money from the state, nor received any donations or grants. We were about to stop printing, when Lebedev stepped in.

He had more problems than profits. There were SWAT teams at his office, and they seized his documents. Finally, four years ago, Lebedev returned 25% of the shares to us. He never influenced the politics of the newspaper, and I will always be grateful for his support during these difficult times.

Q / Can you compare journalism in Russia under different political systems, from Communists to Putin?

A / History is cyclical, everything repeats itself. The current media situation is very similar to what it was 40 years ago. There is censorship, new bans appear all the time, the security system publishes new lists of the types of information not to be collected. But there is still an important difference. It’s the internet age now, nothing can really be hidden. Even if you shut down the internet, information will seep in anyway.

Q / La Novaya Gazeta is one of the last independent media in Russia, which has not been called a “foreign agent”. Will accepting the Nobel Prize change that? Also, do you think Vladimir Putin has spared you so far, for some reason? Its main spokesperson, Dmitry Peskov, congratulated you on winning the Nobel Prize.

A / The very day we heard about the award, we checked with the Ministry of Justice whether its acceptance would constitute foreign funding. To be recognized as a foreign agent in Russia, you must meet two conditions: political activity (they consider journalism to be political activity for some reason) and foreign money. They replied that the Nobel Prize was a special case, especially if the money was spent on charity.

I don’t like the word â€œsparedâ€. No one spared us. The Ministry of Justice enters you in the register of foreign agents after verifying the complaints. Eight such complaints have been filed against us. This means that eight checks started at the same time, but they did not find any violations.

Several months ago, the building where our newsroom is located was targeted by a toxic substance (not Novichok, but one just like that). Fortunately, there were no deaths. This attack happened at night, the substance dissipated in the morning, although the smell lasted another two weeks.

We know who did this, but the culprits have not been found. Our correspondent in the Chechen capital, Grozny, was assaulted, but no culprit was found. And there are also six deaths. So I can’t accept that someone spared us.

As for Peskov, I won’t argue with him, he knows it better!

Q / There are critics who say that despite your harsh criticism of the Putin regime, you are still ready to engage with the Kremlin. You stood up for Aleksey Venediktov, the editor-in-chief of Ekho Moskvy, who backed the controversial online voting platform in the September elections. This, according to many critics, has helped Putin’s United Russia party.

A / Aleksey Venediktov is a close friend, a man of absolute honesty and unfailing principles. The electronic voting system may be flawed and may need improvement, but I will always protect Venediktov from those who think he is playing some people’s game. They just don’t know him.

Q / There are reports that you have friends among the most senior politicians, top law enforcement officials, and even the oligarchs, which protects your brand of journalism. Is this the case of the end justifying the means?

A / Most of these reports are false. I know a lot of people, I have a few friends, but there is certainly no one among them who will help me survive. And I can say for sure that the money smells good.

Q / You said you would have given the Nobel Prize to the jailed Kremlin critic Alexei Navalny if you had been on the committee that decided on the award.

R / I may not agree with Alexei Anatolyevich Navalny. We can argue, we can swear, and even fight (it hasn’t happened yet, but I’m not ruling out the possibility) about differing views and opinions, but only when it’s free. When Navalny is in prison, I fully support him.

Q / Around the world, the tendency to suppress freedom of the press seems to be increasing, even in democratic countries.

A / Power is too strong a drug. Many leaders, even Democrats, cannot help putting pressure on the media once they come to power.

Q / Although India is a democracy, it is ranked 142nd in the Reporters Without Borders index on press freedom, just eight places above Russia.

A / Unfortunately, I don’t know enough about the realities of India today. But according to the ranking, I think the situation there is better than it is here in Russia.

Q / The other Nobel Peace Prize laureate, Maria Ressa of the Philippines, is also an investigative journalist. Why do you think the Nobel committee chose two journalists for the prize?

A / You’d better ask the committee. This trend is now ten years old. Perhaps the committee sees a lot more in common between the nominees. I am very proud to share the award with Maria Ressa. She is an outstanding journalist, and it is a great honor to have my name next to hers.

Q / What do you think of the influence of social networks on journalism?

A / A professor who is a friend of mine put it this way: journalism is something you don’t want to know. And social media, with memes, trolls, and vacation photos, is something you want to know. This is why journalism went nowhere after bloggers arrived. The criteria have just hardened. Journalism always requires checking the facts and opinions of all parties. Social media intensifies competition and makes the world more transparent.

Q / What do you think of the future of independent journalism?

A / The good thing about forecasts is that they don’t come true. Who would have predicted the Covid-19 pandemic? And watch how it changed the world. As editor-in-chief of a newspaper, I am convinced of one thing: printed newspapers will not disappear. But will there be someone to read them? And will there be something to read?