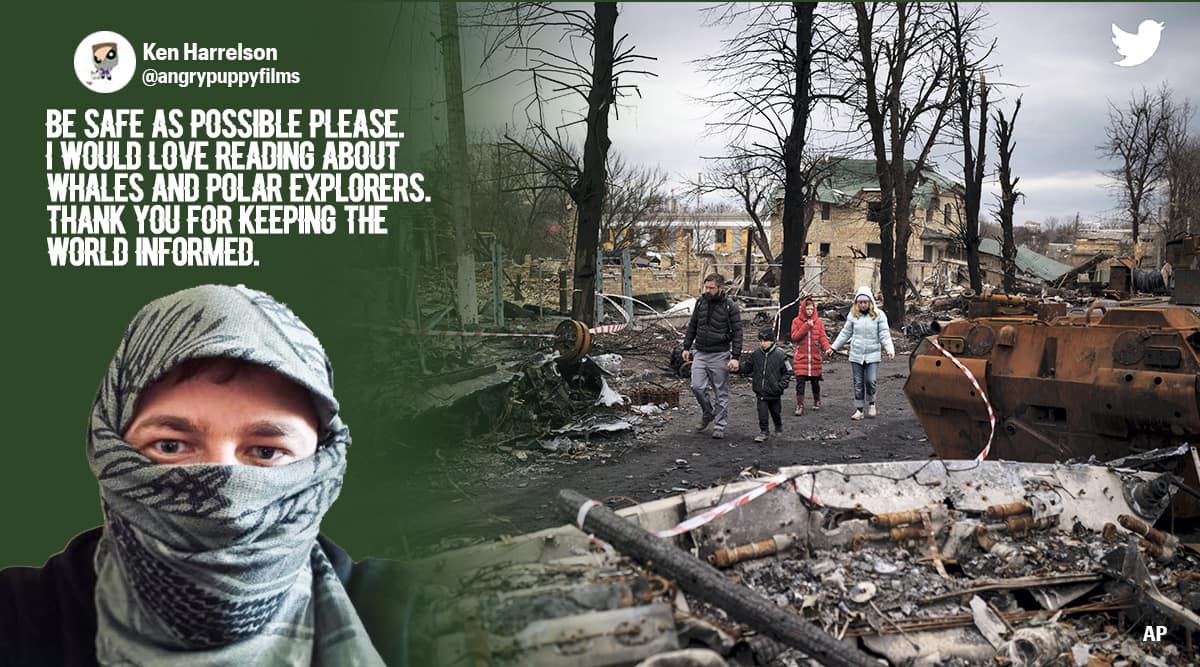 At the risk of their lives, amid intense bombardments and attacks, dozens of journalists are on the front line to cover the war in Ukraine. However, the horrific atrocities committed by Russian forces against civilians, including children, take a heavy toll on their mental health. Today, a journalist’s tweet about quitting war journalism is touching the hearts of people online.

Kyiv Independent defense reporter Illia Ponomarenko has been reporting from the ground up since day one of the Russian invasion from Ukraine on February 24. After witnessing the devastation every day up close, Ponomarenko took to Twitter on Wednesday to express his frustration a bit.

“When this war is over, I will stop war journalism. F*** it,” Ponomarenko tweeted while reporting on the horrors at Bucha. “I will find a quiet, secluded place to live and write stories of whales and polar explorers,” he added.

Ukrainian President Volodymyr Zelenskyy in an address to the United Nations Security Council (UNSC) accused Russian troops of committing “the most terrible war crimes” since World War II in the streets of Bucha, where more than 300 bodies were found.

Also in the news: My apartment in Bucha seems to be fine

Earlier today, when reporting from the outskirts of Kyiv, where evidence of horrific massacres of civilians shocked the world, he wrote that his old apartment in Bucha had survived. “This was once a section of my favorite cycle route through Bucha. Now I can barely recognize many streets I used to know in Kyiv Oblast,” Ponomarenko wrote in another tweet.

This was once a section of my favorite cycle route through Bucha.
Now I can barely recognize many streets I used to know in Kyiv Oblast. pic.twitter.com/Cx3gBZtNfS

As he continued his reporting, the tweet about quitting war journalism drew attention after former Ukrainian ambassador to Austria Olexander Scherba retweeted it. Many flocked to the post to send him lots of love and praised him for his courage and resilience.

While praying for his safety and hoping the war would end soon, many commented with photos and videos to offer him some comfort, while others invited him to beautiful places when things got tough. would improve.

When you’re tired of snow, come to the beach! Lots of hugs and Slava Ukraini! https://t.co/UhP50S9sDO

Remember, if it weren’t for a journalist like you, the innocent people who lost their lives would have been forgotten.
Thank you for being their voices~

I am also in Northern Ontario Illia. One of the largest numbers of Ukrainian immigrants to Canada. You will be at home. This war breaks my heart.

We don’t have whales but we have an Arctic Circle in Finnish Lapland. I have a very good option for you: the island of Kökar in the middle of the Baltic Sea. I would be shy to show you places there. There are no police, no crimes. Doors always open.

You must visit this place, it is one of the most beautiful places on planet earth. Lots to see and write. pic.twitter.com/2rEhB0vPjM

Then you will probably move to Lofoten in northern Norway 🇳🇴. A wonderful place that has healed the wounds of many wars and released the anxiety of many artists pic.twitter.com/XOc8siXTrX

The west coast of British Columbia, Canada is beautiful. We would like to find a way to help you come here whenever you want. Lots of whales and white sided dolphins. Bears too. My heart and mind are with all of Ukraine. Be well, stay safe. ❤️from 🇨🇦

May your wishes come true.
Pico Island in the Azores is a perfect place to live and watch whales, with its magnificent volcano, the old whaling stations, excellent milk and butter, warm water for swimming all year round… pic.twitter.com/gQDj3kR44R

As someone who writes about whales, I can recommend it. Thoughts accompany you every day Illia 🇺🇦 pic.twitter.com/ACUA3zvE97

I don’t have whales and polar bears…but I have peace. Wild turkeys, deer, opossums, raccoons and the great outdoors…😁 You and your family are welcome anytime… pic.twitter.com/sjdBWOF3PE