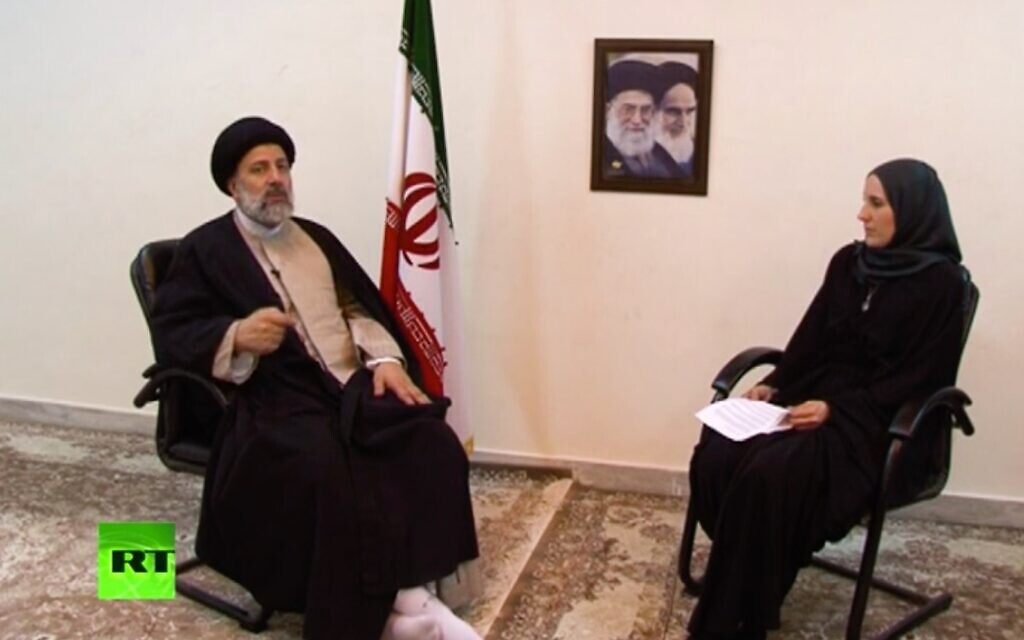 I am not a Mossad spy, says Jewish reporter who interviewed Raisi, worked for Iran TV

On the eve of Iran’s 2017 presidential election, Ebrahim Raisi, who would become president in 2021, sat down to give an interview to Russia Today newspaper. His interlocutor was a French citizen, Catherine Perez-Shakdam, then a practicing Shiite Muslim.

Perez-Shakdam, veiled and religiously observant, had become a regular figure in Iranian state media, giving favorable coverage to the regime and its proxies in the region. She has written dozens of articles in English in the Iranian press and rubbed shoulders with some of the most notorious personalities in the Middle East.

“Zionists plan to annihilate Islam,” trumpeted the headline of a 2014 article she wrote for the Iranian state spokesperson. In the article, she vilified religious Israelis who climb to pray on the Temple Mount, Judaism’s holiest site, calling them “rabid dogs.”

What Raisi probably didn’t know at the time was that Perez-Shakdam was born into a Jewish family. Five years after her interview with the Iranian leader, Perez-Shakdam has become an atheist and reconnected with her long-abandoned Jewish identity.

“I began to understand that for years I had played into the hands of the very people who wanted us to leave… For years I was driven by a kind of self-hatred. But you realize you can’t deny who you are,” Perez-Shakdam told The Times of Israel in an interview.

Perez-Shakdam wrote three posts on The Times of Israel blogging platform in November, the third of which described his interview with Raisi. It went largely unnoticed for three months, but in recent days it has started to make headlines in Persian and Arab media, causing a social media storm even amid the Russian invasion of Ukraine.

Iranian media quickly declared her an Israeli Mossad spy and broadcasters who had been spotted with her were forced to provide clarification.

The office of Iranian religious leader Ayatollah Ali Khamenei quickly disavowed any connection to her. Many of his media appearances and articles have been scrubbed from state websites, although archived versions of some can still be found.

Catherine Perez-Shakdam, a French citizen of Jewish origin (second from left) attends a conference in Tehran in February 2017 (Courtesy)

Perez-Shakdam dismisses the spying allegations as nonsense. “I’m used to it. When they don’t like what you have to say, they come for your character – although I didn’t expect it to become quite that kind of circus” , she said.

“I never talked about my heritage”

For Perez-Shakdam, who now resides in London with her two children, the current media attention has been another step in a complex and winding life story.

Born in Paris to Jewish parents who fled Nazi persecution, Perez-Shakdam converted to Islam and spent years as a journalist and commentator in the Middle East.

“I was raised very, very secular. It wasn’t that I was cut off from the Jewish community, but I had no sense of religious affiliation. I never grew up with a sense of identity. Jewish,” she said.

At first, Perez-Shakdam wrote, from the UK and Yemen, for international publications. But over the course of her career, she has appeared primarily as a talking head in Iranian state media. She presented Iran’s talking points to the world, but points out that she now has very different views.

“I was really into the club. I was on TV all the time. I think I wrote for all the media outlets they have, and I met quite a few people,” Perez said. Shakdam laughing during his Zoom interview with The Times of Israel “Having a Jew featured on Press TV – the mouthpiece of the regime – bothers them. 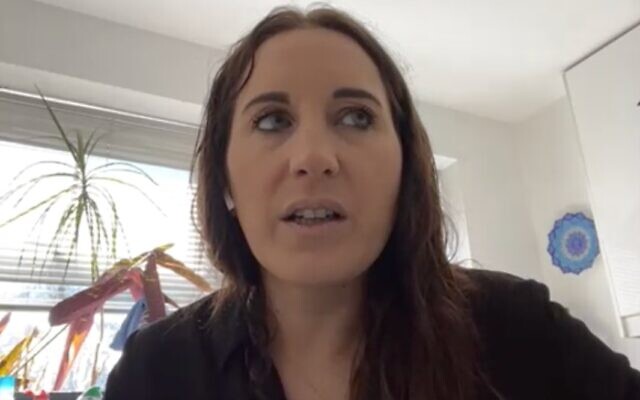 Catherine Perez-Shakdam speaks to The Times of Israel from London via Zoom on March 7, 2022 (Screenshot)

In 1999, then a young student at the London School of Economics, Perez-Shakdam had met her future husband, a Sunni Muslim from Sanaa in Yemen. They married six months later. Although Perez-Shakdam converted to Islam, her Jewish background was a source of friction with her in-laws and ultimately became a source of shame for her, she said.

“I never talked about my heritage, because I knew if I mentioned it I would be silenced. So I just stopped mentioning it,” Perez-Shakdam said.

While her husband was a Sunni Muslim, Perez-Shakdam found herself drawn to the second main branch of Islam, Shiism. Shia Muslims revere a distinct set of Islamic leaders – the Prophet Muhammad’s son-in-law Ali and his descendants.

A strong theme of sacrifice resonates in Shia religious tradition, often centered around the figure of Hussein, Mohammad’s grandson. Hussein was killed alongside his brother Hassan by Sunni leaders in the Battle of Karbala during the factional struggle in early Islam.

Every year, millions of Shias gather in Iraq to observe the Arba’een march. Worshipers travel to Karbala to mark the anniversary of Hussein’s martyrdom, sometimes covering long distances on foot.

“It’s 20 million people marching, not because they have to, not out of religious duty, but out of love for this imam who means everything to them,” Perez-Shakdam says, his voice filled with religious devotion, in a video filmed during one of the pilgrimages.

Do you remember this lady. It was Catherine Shakdam who was raised as a Jew in France and then married a Muslim in Yemen. Acted as a revolutionary lady and infiltrated revolutionary circles and visited #Iran. She finally revealed her true colors as a spy for #Zionism. pic.twitter.com/L7cktuGLbP

It was after her divorce in 2014 that Perez-Shakdam became involved in the Iranian media. “It snowballed very quickly. Iran is so starved of Western support that it will talk to anyone with a Western passport,” she said.

Even then, she says, she was aware that the Iranian media were trying to conscript her into a “propaganda machine”.

“To a certain extent, I played along,” she said, although she said she had never been paid for her articles.

Hearing of Khamenei in Tehran

In 2017, Perez-Shakdam traveled to a mass conference on the Palestinian cause in Tehran – one of five trips she has made to Iran. She moved apparently unhindered: by then she had already been controlled by the regime, she said.

Khamenei opened the conference with a fiery rant condemning Israel as a “cancerous tumor”. The leader – Iran’s most powerful man – vowed that Tehran would never stop supporting Hamas and Hezbollah, to which he credited the successes of the Palestinian national movement.

Hamas terrorist leader Khaled Mashal was present, as was Iranian General Qasim Soleimani, who would be assassinated in 2020 by the United States in a drone strike in Iraq. For Perez-Shakdam, the atmosphere fit well with his own views at the time.

“With Hamas, there is the idea of ​​resistance against oppression, and I think that is very important today. I think Israel doesn’t understand this – it has nothing to do with politics per se, but rather with an idea or a philosophy that people are born free,” Perez-Shakdam said in one of the numerous interviews she did with Press TV, the mouthpiece of the Iranian state, in 2018.

“In the case of the Palestinians, I think the only way forward is armed resistance,” she added.

London-based analyst Catherine Shakdam on Iranian TV: Armed resistance is the only way forward for the Palestinians pic.twitter.com/KEAriIalSO

But Perez-Shakdam said she was always sensitive to what Iranians and others in the Middle East were saying about Jews. In his narrative, Iran is a conflicted society, torn between liberal impulses and its conservative rulers. But anti-Semitism is widespread and found at all levels of society.

“It’s insane what people are saying about Israel and the Jews in Iran. Educated people told me that the Jews had horns and a tail. It’s pretty scary how far the hate goes,” she said.

A kind of mea culpa

Perez-Shakdam credits his now 17-year-old daughter with opening her mind to Israel. Her daughter, who was first exposed to pro-Israel videos on YouTube, began to develop Zionist views as a teenager. When she challenged Perez-Shakdam, it sparked an intellectual journey that led her to her current worldview.

“She kept telling me, ‘I don’t understand. You always tell me to look at both sides of the story. Why do you keep attacking Israel, when every time people attack Jews in general, do you get angry?” Perez-Shakdam said.

“There was this guilt that I carried, this shame about my past, and I read a lot. And I realized that I was just plain wrong, 100% wrong,” she said.

According to Perez-Shakdam, her daughter hopes to serve in the Israeli army.

“My intention is not to defame anyone, or to become the poster child for Israel,” she said Perez-Shakdam. “But it’s important to get people out of their narrative, which is a hate narrative.”