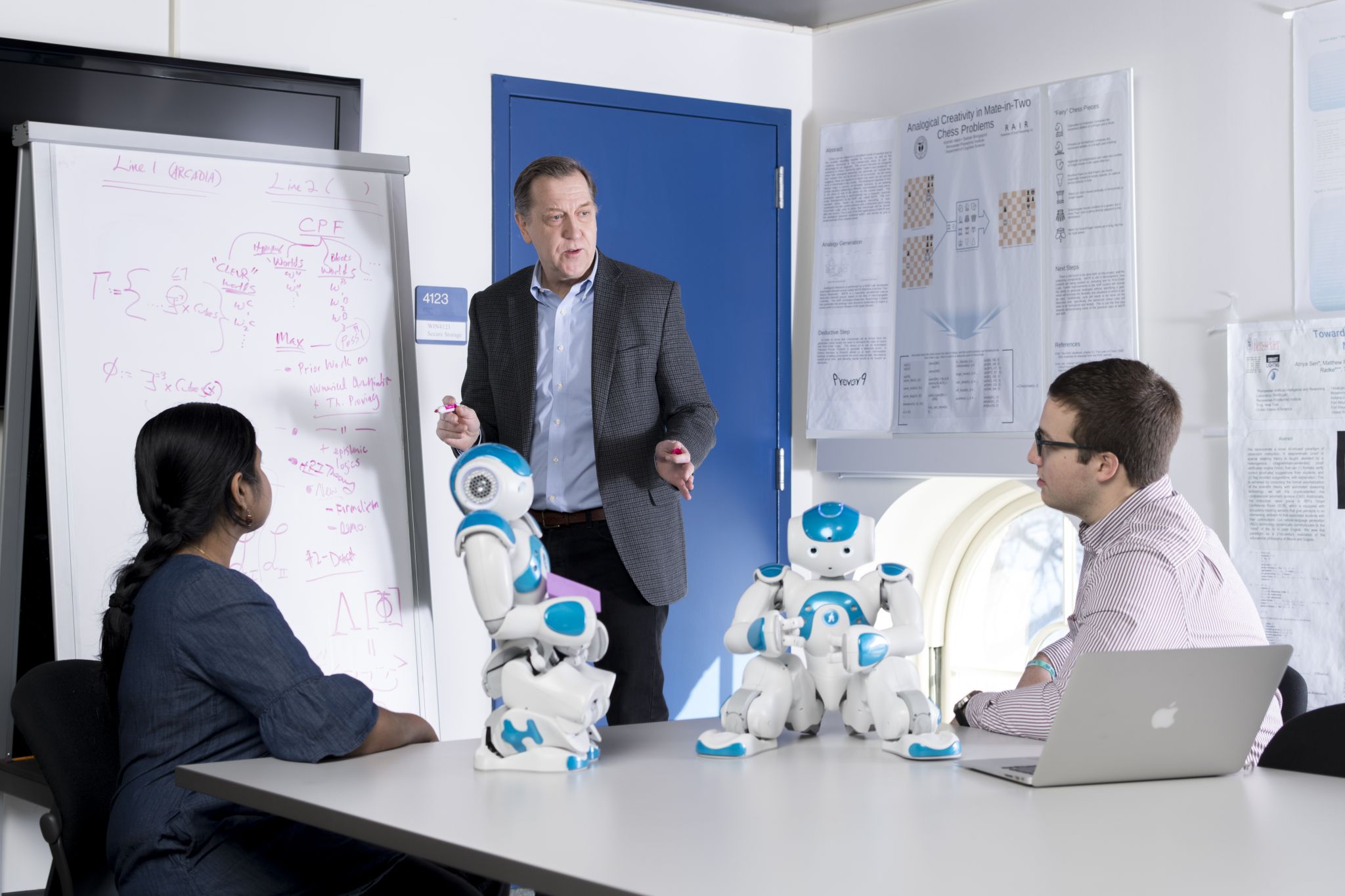 This is how passionately the world’s rich and powerful yearn for brilliant research in artificial intelligence.
Wealthy researchers recently took Rensselaer Polytechnic Institute artificial intelligence expert Selmer Bringsjord to a luxurious Italian castle where they fed him and other scientists gourmet meals for two weeks while playing games and by solving puzzles exploring how machines learn. And, yes, he had plenty of time to enjoy Tuscany. Bringsjord is RPI Professor of Cognitive and Computational Science, Logic and Philosophy. He’s also director of the Rensselaer AI and Reasoning (RAIR) lab with robots that look smart and cuddly enough to star in a sci-fi blockbuster.

As director of the Institute for Data Exploration and Applications at RPI, Jim Hendler has had his share of adventures. Hendler was chief scientist at the US Defense Advanced Research Projects Agency. The Air Force awarded him an Exceptional Civilian Service Medal in 2002.
AI is a mystery to most Americans who know it mainly from science fiction. AI robots have evolved to be good (data from “Star Trek TNG”, Bishop in “Aliens”) or bad (Terminator, “Blade Runner” replicants).

In reality, no AI has demonstrated spiritual awareness. Last year, the Atlantic Council reported that Russia and Ukraine had weaponized AI (Google, Rakuten, and Samsung had Ukrainian AI research centers). With Russian troops massed along the Ukrainian border, now is a good time to ask; Can AI ever become a life form with a soul?

Hendler is an Orthodox Jew and Bringsjord describes himself as a “non-denominational Orthodox Christian”. Over dinner at Perreca, they shared their thoughts on this question and whether AI can be programmed to be good or bad and who can be trusted to teach AI morality?

Q: Stanford University science historian Adrienne Mayor believes that ancient Buddhist texts and Jewish folklore’s Golem (figure of a man carved out of mud and then brought to life by a rabbi to protect Jews) describe the AI. Does religion hold any wisdom on how humans should view AI?
Hendler: Talmudic scholars try to imagine what future science will create so that they can defend the principles of that future before it exists. AI has been debated since the 1800s. Interestingly, there is a line in our Rosh Hashanah (New Year’s) prayer, “We are neither angels nor robots.” I once left a toy robot on my rabbi’s desk with a little sign that said, “unfair to robots.”
Some prayers can only be said by 10 adult Jews… A golem cannot be one of the 10. I have been involved in debates about whether IBM’s Watson (supercomputer) can be one of the 10. The real question is who matters. like human? Can a slave count as an adult human? converted to Judaism? Women? Who do we see as human?

HOW ROBOTS CAN PROVE THEY ARE ALIVE
Q: What characteristics should the AI ​​display to prove it’s a life form?
Bringsjord: Self-awareness. A mushroom is alive but unaware of its life or the world around it. Sophisticated and novel use of language. The other great essential element is agency. But that term doesn’t resonate with AI experts these days.
Q: Is “free will” too religious?
Bringsjord: Probably. The current buzzword in AI is “radical autonomy”.

Hendler: That means an AI makes its own decisions about what to do and when to do it.

Bringsjord: It also means the AI ​​could decide that it’s fundamentally lacking and needs to change itself. It would be a big leap. There are ongoing arguments about how to define when an AI is imaginative, not just…
Hendler: …not just recite what was taught. Creativity is a key attribute. There is a term for consciousness called theory of mind. (Editor’s note: This is the ability of humans to understand the beliefs, intentions and emotions of others by remembering and analyzing their behavior to infer what each person will do next.) Understanding facial expressions, interpreting the body language.

Hendler: Questions people have been asking for decades, not all of us can answer tonight…
Bringsjord: Maybe with a little more espresso…

WHO SHOULD TEACH ROBOTS TO BE MORALE?
Q: It takes an immense amount of data to teach a robot to lift a box. How much data does it take to teach a robot friendship?
Hendler: We don’t know. … An AI that can beat a world chess champion may be unable to tie its shoes. Someone taught AI chess but not laces. If machine learning can teach an AI with empathy, it should be given many scenarios. If XY occurs, the human may react with Z and need you.
Q: Like a robot doctor learning that a patient might need their hand held after receiving bad news?
Hendler: Partly, yes.
Q: Would it take more data to teach an AI to be bad or good?
Hendler: Evil and good probably require the same effort and the same amount of data.

Bringsjord: A new book, “The Age of AI” by Henry Kissinger, former Google CEO Eric Schmidt and Daniel Huttenlocher (Dean of MIT Schwarzman College) says it’s time to establish the human values ​​that AI should to learn.
Q: Kissinger’s conduct during the Vietnam War is bitterly controversial. Many might object to him deciding the morals of robots.
Bringsjord: People are right to wonder who should teach moral and human values ​​to AI. It is critical. (He notes that President Joe Biden’s tech advisers have urged him to appoint a panel of experts in science, philosophy, art, music, foreign affairs and more to create guidelines on AI).

Q: Is this evidence of AI creativity?
Bringsjord: Whenever you read about AI creating art, ask yourself how humans got involved: did humans give AI a predilection for specific types of paint? It’s different from a machine that originated its own tastes and choices.
Hendler: CLIP obtained thousands of images to illustrate various emotions. Selecting images categorized under melancholy is different from understanding and visually translating an emotion.
Q: When do you think we’ll have an AI as empathic as “Star Trek” data?
Bringsjord: Not in our lifetime. Probably not the lives of our children.

SOMETHING IS COMING
Q: If AI is still so limited, why do academics like those advising Biden or analyzing Russian weapons seem freaked out about human-hating AI?
Hendler: We may not be able to create the “Star Trek” android, but something is happening. An AI that mimics human thought processes but has no morals or soul can be dangerous.
Bringsjord: People need to think carefully about the risks of creating an entity with intelligence but without a soul. That may sound more like Hal than Data. (Laughs). Hal was related to the audience of the films. (In “2001: A Space Odyssey”), he had more emotion than the astronauts. And he fought for his life.
Q Are your wives scientists who embrace a religious faith?
Hendler: My wife has a doctorate. in molecular biology and among other things a cantor who composes music.
Bringsjord: My wife has a doctorate. in Educational Psychology and Statistics, and is Vice Chancellor of the SUNY System. As for his adherence to a faith: yes.
Q: They are awesome! So they understand your AI quest and what you are looking for?
Bringsjord (laughs): No.
Hendler: I don’t understand what I’m looking for!
Q: But the research is exciting?
Hendler: Absolutely!