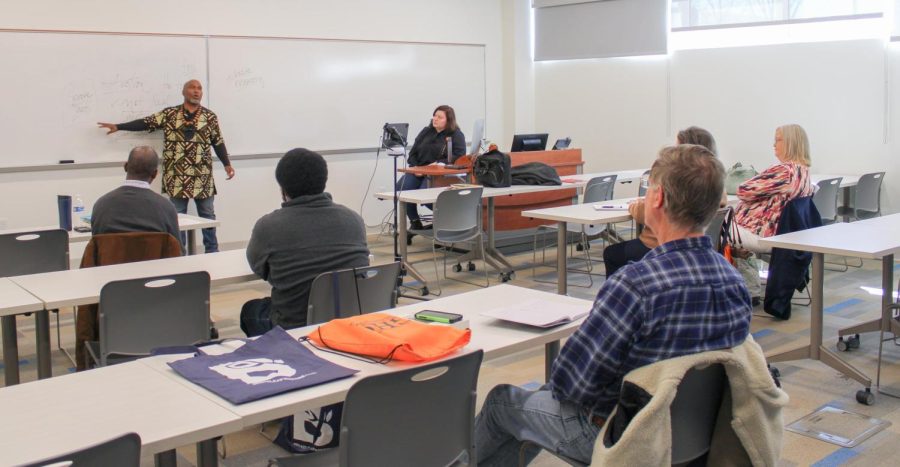 Dr. Daniel Black gives advice on writing fiction to the participants of his panel. Black said it was good to finish a writing project, even if it was bad. “You have to know what your bullshit looks like,” he said.

Aspiring writers from all walks of life attended the fifth annual Highland Writers Conference held on March 12 at the Student Center on the GHC Cartersville campus. Freezing weather and the recent rise in gas prices expected low attendance, but in-person and Zoom attendance formats were able to accommodate 45 attendees.

The conference is a one-day program that brings together accredited authors, podcasters, and screenwriters to host sessions for writers of various genres to hone their craft and experience what life is like as a career writer. It is sponsored by GHC and Acting Dean of Humanities, Jessica Lindberg, has resumed her role as event coordinator.

“It’s a fiery group here and I think it will happen again,” Klibanoff said.

Creative writing is an art that many people take up with a passion, and for some, like author and playwright John M. Williams, it’s a way of life.

Williams began mentoring in Reinhardt University’s Master of Fine Arts (MFA) program in 2015 after retiring from LaGrange College, where he was an English professor. His published books include the novel “Lake Moon” and the nonfiction book “Atlanta Pop in the ’50s, ’60s & ’70s: The Magic of Bill Lowry.”

“Writing that I love and I never want to get to where I don’t love it because then I don’t know what I would do,” Williams said. “I don’t have a plan B. It’s the only one I have.”

Klibanoff, who currently teaches at Emory University, said the search for clarity in writing is what he believes drives him to write.

“I argue that research and reporting are essential,” Klibanoff said. “And really the most important part because… what good is a story that’s completely false?”

Klibanoff has 36 years of journalism experience at the Boston Globe, the Philadelphia Inquirer and the Atlanta Journal-Constitution. He won the 2007 Pulitzer Prize for History alongside Gene Roberts for their book “The Race Beat”.

However, a strong passion for writing isn’t all it takes to succeed in the world of professional writing. Writing is a business of product marketing, promotion and fundraising. The conference featured an editing panel with urban fantasy author John G. Hartness, horror/comedy author Jeff Strand, and pulp fiction author Bobby Nash as speakers.

“Publishing is purely a business,” Hartness said. “I want to give people a realistic impression of the life of a writer. I want them to know that you’re not going to get rich on just one book. It’s a work.

Hartness also mixes science fiction, rural urban fantasy and thrillers. He runs his own writers’ conference, SAGA, which is “suitable for genre fiction writers”. It will then take place in March 2023 in Winston-Salem, North Carolina. His books are available at Falstaff Books website.

As well as helping writers learn more about their preferred writing style, the Highland Writers Conference also gives attendees the opportunity to explore other writing styles they may not have. not be discussed before.

“I had never even thought about writing screenplays before,” Cole said. “I think being exposed to many different writers will always make me a better writer because I’m always going to expand my perception.”

Stepping out of your comfort zone can present unexpected opportunities.

“You can do a lot of things at home, but more good things happen when you get out and about…” Williams said. “And I think that’s really important for writers and artists in general to connect.”

“I think it’s cool that GHC even hosted a conference like this,” Cole said. “So it really exposes students to the areas they’re going into and I think that’s important.”

The writers’ conference is meant to teach attendees something they might not already know and broaden their horizons.

“I think anyone who attends a conference like this walks away with a moment or two of enlightenment,” Klibanoff said.

The Highland Writers Conference will return in 2023 to give writers another chance to pick the brains of career writers and mingle with each other.

Dr. Daniel Black gives advice on writing fiction to the participants of his panel. Black said it was good to finish a writing project, even if it was bad. “You have to know what your bullshit looks like,” he said.