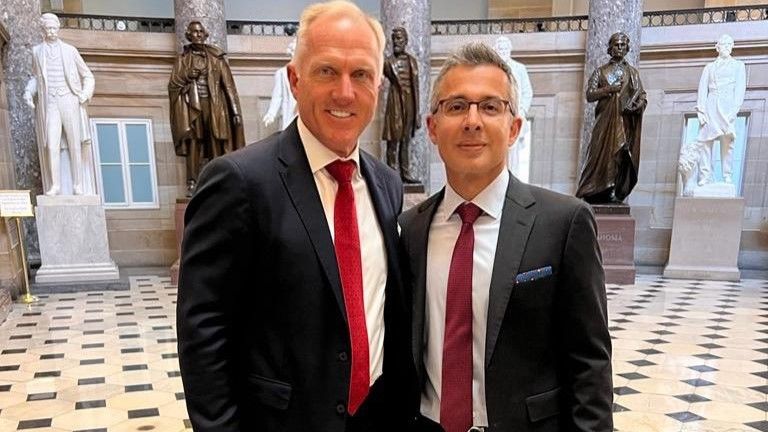 Thank you for subscribing to . You will receive a verification email shortly.

There was a problem. Please refresh the page and try again.

Greg Norman thanked members of the House Republican after meeting with them to discuss the ongoing battle with the PGA Tour, although the LIV Golf chief received a chilling reception from some.

The LIV Golf CEO met with the Republican Review Committee to share his concerns over what he sees as anti-competitive tactics being used by the PGA Tour towards the Saudi-backed series, later telling reporters that he s welcomed the opportunity to give “both sides of the story”. so that they understand what LIV is”.

The PGA Tour has suspended all LIV players from its events indefinitely, meaning Phil Mickelson, Dustin Johnson and Cameron Smith can no longer play there. The new PGA Tour season kicked off last week with the Fortinet Championship, while five of eight LIV Golf Invitationals have been contested this year, ahead of the league’s first full season in 2023.

In a letter to PGA Tour members in August, commissioner Jay Monahan discussed the legal action brought by a group of LIV Golf players seeking to have their suspensions overturned. In it, Monahan said the players knew they wouldn’t be eligible to play PGA Tour events if they decided to join LIV, accusing them of “trying to use lawyers to get their way into competition alongside our members in good standing”. He added that allowing them to join the PGA Tour would be “to the detriment of our organization, our players, our partners and our fans”. He told members, “This is your tour, built on the foundation that we work together for the good and growth of the organization…and then you reap the rewards.”

Norman took to Twitter to thank the politicians for their time and underscore his belief that competition is vital, but it seems not all present share the LIV leader’s vision.

(Pt.1) To the 100 bipartisan lawmakers I’ve met in the past 24 hours on The Hill: Thank you. Thank you for giving me the opportunity to visit and tell the story of LIV Golf. Freedom of speech and free enterprise are the foundation upon which this country was founded. Competition is an essential elementSeptember 22, 2022

(Pt.2) USA DNA. Competition breeds excellence. Without competition, there is no capitalism. I had the pleasure of meeting you and sharing our vision of golf diplomacy. Nationally and globally, it’s true: golf is a force for good. pic.twitter.com/a67UOoaYfaSeptember 22, 2022

According to the political site The hillRepresentative Tim Burchett walked out before the meeting was over, saying it was all “essentially propaganda”, while denying Norman’s anti-competitive accusations.

He said, “A bunch of rich lads [are] I’m not going to golf somewhere – I don’t mind at all. The feds need to stay out of this and let these country clubbers run their own game. It shouldn’t take our time. [We’re a] conservative organization, and we should be dealing with what we have to deal with in our country, not with – worried about a group of Saudis, a group of billionaire oilmen, who are dealing.

During the meeting, Norman was questioned by Representative Chip Roy about LIV’s connection to Saudi Arabia according to The Hill, and asked why he was not registered as a foreign agent. Norman said afterwards that it was “great to have an open debate” with Roy and dismissed his concerns, saying, “We are a business operation. So we are here only to develop the game of golf.

Roy was less optimistic after the meeting, telling reporters, “Don’t come here and act like you’re doing something right while you’re supporting $1 billion in Saudi money and the Kingdom of Saudi Arabia in the United States. .”, adding that the appearance of the great white shark in front of politicians is “PR for Saudi Arabia – it’s PR for LIV Golf.”

Norman remained positive as he left the meeting, saying, “Since I’ve been CEO, no one has told me this was a bad idea.”