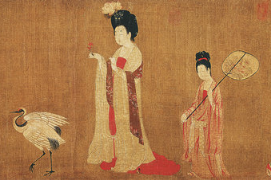 For a long time, 87-year-old Yang Qi, a former professor of art history at Tsinghua University, has applied Western art theories to study ancient Chinese art, whose heart regards art as the reflection of social life. But when it comes to the masterpieces of wash painting of the Yuan Dynasty (1271-1368), he found it to be meaningless. Yang had always agreed with the French philosopher Hippolyte Taine that “in happy times artists create only happy works, while in times of chaotic war they produce only melancholy works”.

This is true for The Triumph of Death, by Flemish Renaissance painter Pieter Bruegel the Elder, who Yang says created the work under the influence of the atrocities of war in the 16th century. In the ghastly tableau, a great army of skeletons sweeps across an arid landscape and humans, male or female, rich or poor, young or old, all fall under the scythe of death.

“It reflects the chaos caused by war and people’s suffering,” he says.

“Their lives were painful, they were pessimistic and their future was hopeless. But how did they present this chaotic time?” Yang asks.