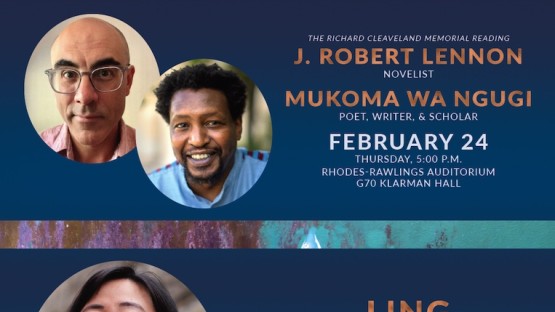 The Spring 2022 Barbara & David Zalaznick Reading Series, which begins February 24, will feature a wide range of artistic styles and voices from around the world. The series, organized by Cornell’s Creative Writing Program, allows innovative and award-winning authors to read their work at Cornell’s Ithaca campus.

Each reading concludes with a live question-and-answer session where students, faculty and the public have the opportunity to interact with the speakers, and is followed by a book signing session with books made available at the on-site purchase by Buffalo Street Books of Ithaca.

All events are free. Attendance guidelines are binding and subject to change; visit english.cornell.edu/zalaznick for current guidelines and more information.

The series will open with the Richard Cleaveland Memorial Reading by novelist J. Robert Lennon and poet, writer and scholar Mukoma Wa Ngugi on Thursday, February 24 at 5:00 p.m. in the Rhodes-Rawlings Auditorium, G70 Klarman Hall.

J. Robert Lennon is the author of three storybooks and nine novels, including Familiar, Broken River and Subdivision. His short fiction has appeared in The New Yorker, Granta, The Paris Review and Harper’s, and his reviews in The London Review of Books, The Guardian and The New York Times Book Review. Lennon is a professor in the Department of English Literature.

Mukoma Wa Ngugi is an associate professor in the Department of English Literature and the author of the recent Unbury Our Dead with Song; as well as The Rise of the African Novel: Politics of Language, Identity and Ownership; the novels Black Star Nairobi and Nairobi Heat; and two books of poetry, Logotherapy and Hurling Words at Consciousness. Her novel Mrs. Shaw was released in East Africa as We, the Scarred in 2020. Nairobi Heat has just been optioned by a major Hollywood studio.

Ling Ma is the author of the critically acclaimed debut novel Severance, which won the Kirkus Prize for Fiction, the NYPL Young Lions Fiction Award, and the VCU Cabell First Novelist Award. Named New York Times Notable Book and NPR Best Book of 2018, it has been translated into seven languages. Ma’s fiction and nonfiction have appeared in Granta, Playboy, Vice, Chicago Reader, Ninth Letter, Buzzfeed, and more. His scholarships include a Whiting Prize and an NEA Creative Writing Fellowship. Ma was born in Sanming, China and raised in Utah and Kansas. She earned her MFA from Cornell in 2015. Prior to grad school, she worked as a journalist and editor. She has taught creative writing and English at Cornell University and the University of Chicago.

Mr. NourbeSe Philip, winner of the Poet & PEN/Nabokov Award, will deliver the third reading on April 14 at 5:00 p.m. in the Rhodes-Rawlings Auditorium, G70 Klarman Hall.

Born in Tobago, Mr. NourbeSe Philip is a poet, essayist, novelist, playwright and independent scholar who lives in the city of Toronto, where she practiced law for seven years before becoming a poet and writer. Among his published works are She Tries Her Tongue, Her Silence Softly Breaks; the speculative prose poem, Looking for Livingston: An Odyssey of Silence; the young adult novel, Harriet’s Daughter; the piece, Coups and Calypsos; and four collections of essays, including his most recent collection, BlanK.

His book-length poem, Zong!, was named the 2021 winner of the 21 Books of Today’s World Literature for the 21st Century. Among his many awards are the Pushcart Prize; the 2020 PEN/Nabokov Prize for Achievement in International Literature; and the 2021 Canada Council for the Arts Molson Lifetime Achievement Award, for his “invaluable contributions to literature.” His scholarships include Guggenheim, McDowell and Rockefeller (Bellagio). She is the recipient of the YWCA Woman of Distinction (Arts) and Elizabeth Fry Rebels for a Cause awards.

Bao Phi is a two-time Minnesota Grand Slam champion and National Poetry Slam finalist, whose poetry is included in the 2006 Best American Poetry anthology and widely published elsewhere, including two collections published by Coffee House Press as well as others. collections and magazines such as Spoken Word Revolution Redux, Poetry Magazine, Asian-American Literary Review and many others.

Her fiction and essays have appeared in Octavia’s Brood: Stories from Social Justice Movements, A Good Time for the Truth: Race in Minnesota, and others. He is also known for his three children’s books: his A Different Pond received six star reviews and several awards, including the Caldecott Honor, an Ezra Jack Keats Honor, the Asian/Pacific American Librarians Association Award for Best Book of images, the Minnesota Book Award. for picture books, and other recognition. Phi is a visiting critic in the Department of English-Language Literatures during the 2021-2022 academic year.

Are you worried about parking? The 30 TCAT bus route (Shops at Ithaca Mall-Cornell-Commons loop) leaves the Seneca Street station every 15 minutes and stops in front of the Klarman/Goldwin Smith Halls where the readings will take place. The TCAT Bus Route 10 (Commons-Cornell Shuttle) leaves Seneca Street Station every 10 minutes Monday-Friday until 5:10 p.m. and will stop on demand outside the Klarman/Goldwin Smith concourses. After this time Route 10 runs every 20 minutes until approximately 7:00 p.m. The cash fare for a single ride is $1.50. You can track the location of TCAT buses using the myStop mobile app – for more information visit tcatbus.com/Apps. For short-term parking options, visit cornell.edu/visit/parking or call Transportation Services at 607-255-4600.

Read the story on the College of Arts and Sciences website.