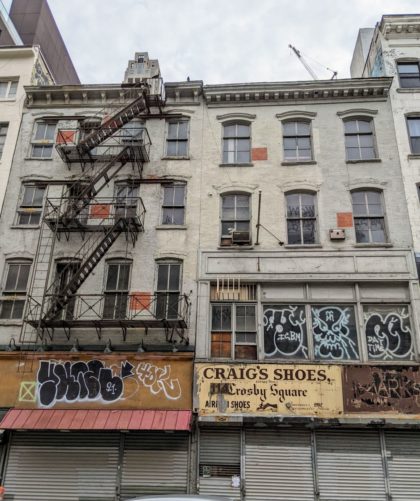 ONCE UPON A TIME ON THE ROOMS
In discussion of the Patriot’s closure, James Bogardus sent a link to a 14-year-old video posted by philosopher and musician Henry Flynt (he coined the phrase “concept art” among other things) where he describes coming to Yoko Le Ono’s loft at 112 Chambers, next to the Patriot, in 1961. It’s a fun tale of Coltrane licks, Yoko distance and the cultural pyramid with Karlheinz Stockhausen and John Cage at the top.

But it also reminded me to dig into the Tribeca South Historic District Expansion Designation Report to learn a bit more about the buildings there — as well as ACRIS to see if, like G. predicted, someone is assembling the buildings there for some kind of project.

So to the second question: From what I can see in the city’s financial records, the 110-room Patriot building was sold to William Stone in 1972. His estate now owns it. Deeds 112 and 114 appear to have the same block and lot number, these two buildings were transferred to Si Jei Mei LLC in 1993; nothing has happened since. (The LLC also owns 18 Murray, which contained Lily O’Brien until it was damaged by the collapse of Tent & Trails.)

110 Chambers (Patriot) was built in 1954 with a cement stucco facade by Dr. Austin L. Sands, a well-known physician. Over the next decade there were electricians, hardware and cutlery dealers, printers and engravers, but by 1940 and for the next 15 years there was one Tribeca institution: Pearl Paint. In 1980, there were residents on each floor, and I know a little more: the rent was $65 and there were no windows.

114 was built in 1857 by Henry W. Olcott, a stockbroker who had rented the property from Trinity Church since 1835. Olcott, who lived at 114 Chambers from 1835 to 1841, redeveloped the property at a time when residential streets to the west and north of City Hall Park were rapidly improved with new commercial buildings for the dry goods trade. There was a lunch there in the 1940s, and as the sign says, it was Craig’s Shoes from 1950 to 1975.