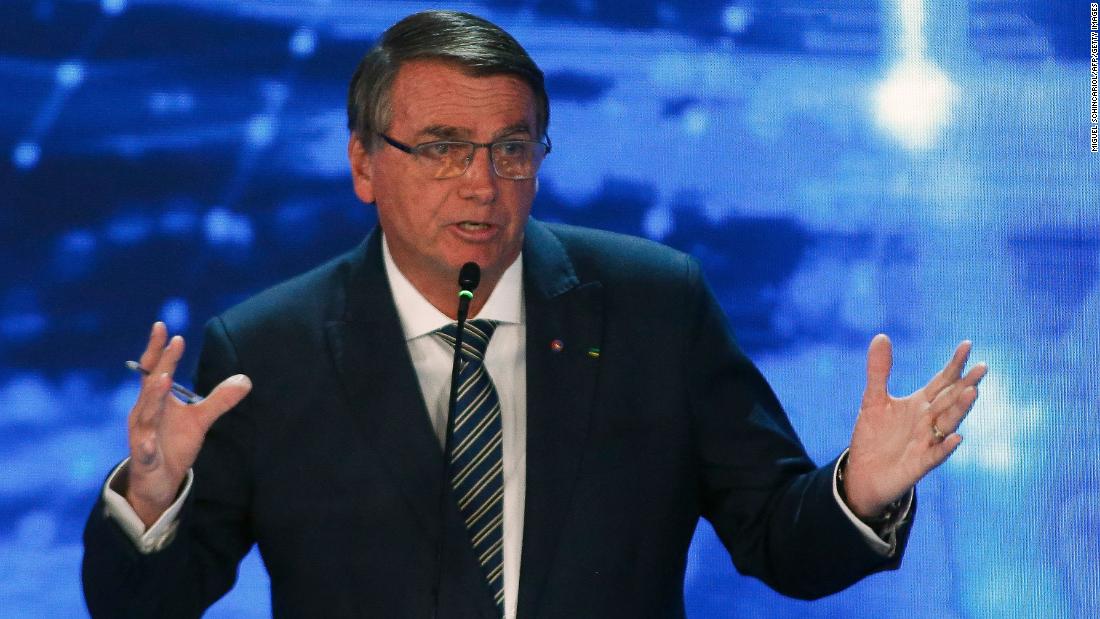 “I think you’re going to sleep thinking about me. You have a crush on me,” Bolsonaro told Vera Magalhães after asking him about Brazil’s vaccination rate against Covid-19. “You are a disgrace to journalism in Brazil,” he said.

Magalhães later said that Bolsonaro’s attitude was “absolutely uncontrollable, unnecessary and…detrimental to himself”. She said she believed Bolsonaro “doesn’t like being questioned by women.”

Bolsonaro’s insulting comments to Magalhães came after he was criticized for his attitude towards women. The far-right leader defended his government’s support for laws in favor of women and claimed that “a large part of the women in Brazil like me” because he opposes the legalization of drugs.

Bolsonaro and former President Lula joined four other candidates in what was the first televised debate ahead of October’s presidential election. The debate focused on a range of issues including the economy, climate change and the government’s handling of the Covid-19 pandemic, but was peppered with personal attacks.

Bolsonaro has been forced to go on the defensive over his handling of the economy, the climate crisis and the pandemic. The president said Brazil’s economy was “booming”, despite record unemployment under his administration.

Meanwhile, Lula, the most popular candidate according to recent opinion polls, has denied corruption charges and defended his innocence.

Lula was convicted of corruption in 2017 and turned himself in to federal authorities in April 2018 to begin serving a 12-year prison sentence. However, in 2021, the Supreme Court overturned the conviction, allowing him to run for president again.

“I was arrested so you could be elected president but then I was found not guilty. But I will win now to suddenly see what you want so much to hide!” Lula said in reference to Bolsonaro’s alleged efforts to conceal information and weaken transparency since taking office.

Senator Simone Tebet, of the Brazilian Democratic Movement Party and member of the country’s Covid-19 parliamentary committee, accused Bolsonaro of delaying Covid-19 vaccines and spreading fake news about the virus, a claim the president has denied. .

The other three candidates who took part in the debate were Soraya Thronicke of the Union Party of Brazil, former finance minister Ciro Gomes of the Democratic Labor Party and political scientist and writer Luis Felipe D’Avila of the Novo party.

This will be Lula’s sixth bid for the presidency with the Brazilian Workers’ Party (PT). He held the post from 2003 to 2011 and left office with a 90% approval rating after millions of Brazilians were lifted out of poverty during his tenure in power.

However, his good fortune did not last long. After surviving throat cancer in 2011, da Silva was convicted of corruption and money laundering six years later, charges stemming from a wide-ranging investigation into state oil company Petrobras.

The first round of Brazil’s presidential election is scheduled for October 2 and officials have warned the hotly contested election could spark unrest.

The country’s Superior Electoral Court Minister, Edson Fachin, said in June that there was a risk of unrest “more serious” than the Jan. 6, 2021, uprising on the U.S. Capitol.

Bolsonaro, who is behind Lula in opinion polls, has repeatedly questioned the country’s electoral process and particularly criticized the use of electronic ballots – a system that was introduced in 2000. He also called on the military to carry out a parallel “public” vote count.

Fachin said that the electoral authorities would not accept interference from the federal government or the armed forces, and added that the Organization of American States (OAS) had agreed to be an observer in the Brazilian elections.