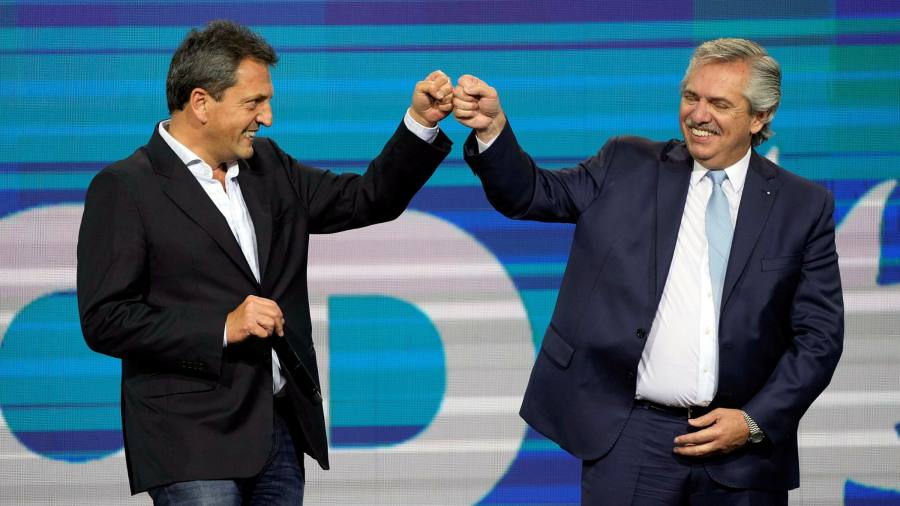 President Alberto Fernández has appointed the influential leader of Argentina’s lower house to lead a new economic ‘super ministry’ in a bid to save his government and regain market confidence amid fears of a widespread economic crisis are getting worse.

Sergio Massa, the Peronist leader of the lower house of Congress, will be in charge of a ministry that oversees economic, manufacturing and agricultural policy, the government announced Thursday.

He is the third person to take charge of the Argentine economy in less than a month. He replaces Silvina Batakis who was sworn in on July 4, succeeding Martín Guzmán, who unexpectedly resigned amid a split in the ruling coalition government over the direction economic policy should take.

As part of his role, Massa will also lead Argentina’s $44 billion restructuring deal with the IMF, as well as negotiations with other international lenders, the government said.

Batakis, who has just returned from Washington where she met with IMF officials earlier this week, is expected to remain in government as head of Banco Nación, officials say.

Speculation in recent days of a cabinet reshuffle had brought some relief to markets amid signs that Massa, who is seen as a more moderate member of the ruling coalition, could be granted sweeping powers to introduce much-needed reforms to help reduce inflation and avoid a crisis.

Argentinian bond prices rallied on Thursday, with dollar bonds maturing in 2030 climbing more than 23 cents on the dollar, their highest level since Guzmán’s resignation in early July.

The president’s decision to establish the ministry comes as confidence in his government’s ability to cope with the rapidly deteriorating economy has plummeted.

Despite Batakis’ promises to meet IMF commitments and restore “order and balance”, investors and the public feared she lacked the political support needed to turn the economy around.

Argentine savers rushed to swap their pesos for currencies such as the U.S. dollar as fears of a possible devaluation pushed the black market exchange rate to record highs in July. Sovereign bonds are trading in troubled territory and inflation is expected to exceed 90% this year.

According to local media, Massa insisted on having a level of control over the Ministry of Finance and the Ministry of Energy as conditions for accepting the position that would allow reductions in subsidies on energy bills and other measures to be passed. stricter policy changes. These are the same terms, analysts say, that former economy minister Guzmán failed to secure and that led to his resignation earlier this month.

As a lawyer who served as chief of staff under Cristina Fernández de Kirchner, the current vice president and former president, analysts believe Massa may be better placed than his two predecessors to negotiate with different coalition members as well as with the opposition.

Kirchner leads the most radical left-wing coalition bloc and believes the Peronists should spend more to protect voters from rising inflation ahead of the 2023 presidential race. An open split between her and the president over how to Reconciling the economy has intensified in recent months and led to a number of senior executive resignations.

Argentinian economist Eduardo Levy Yeyati said Massa’s appointment was “the president’s last card” as a figure who could reassure investors. However, if this does not work, the Fernández government will have no other choice, he added.

Mining Your Roots: A trip to coal country helps our writer connect with his great-grandfather