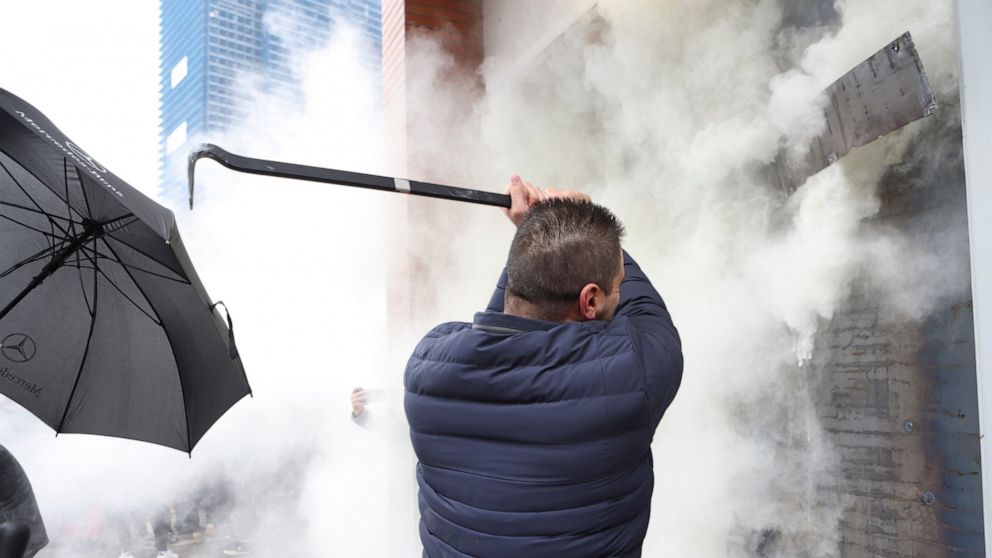 TIRANA, Albania – Albanian police used a water cannon and tear gas to disperse protesters who broke into the headquarters of the country’s main opposition party in an internal row over party leadership .

Dozens of officers pushed back hundreds of demonstrators who stormed the ground floor of the center-right Democratic Party headquarters. They arrested 25 intruders and eight party staff as the two sides clashed, authorities said.

A group led by former party leader Sali Berisha used iron bars and hammers to open the main doors of the building. Employees fired tear gas in an attempt to prevent them from breaking and entering before police intervened at the party’s request.

At least one civilian and one policeman were “slightly injured”, according to Lorenc Panganika, the Tirana police chief. TV coverage showed more civilians appearing to be recovering from tear gas or clashes.

Berisha is trying to oust the leader of the Democrats, Lulzim Basha, whom he accuses of being a â€œtraitorâ€ and a â€œhostageâ€ of Prime Minister Edi Rama of the Left Socialist Party. Basha kicked Berisha out of the party’s parliamentary caucus in September.

Berisha closed the protest after three hours, saying it was part of an “unstoppable revolution”. He said he and his supporters would embark on a nationwide campaign “to dismantle the narco-government”.

Prosecutors have opened an investigation into the protest violence. US Ambassador to Albania Yuri Kim expressed concern at the “growing tension” in the Democrats’ building and called on protesters “to reject violence and show calm.”

Speaking at a press conference, Basha condemned what he called “the criminal organization of Sali Berisha which, with terrorist tools, attempted to violently usurp the Democrats’ headquarters to be protected from his designation non grata “.

In December, Berisha’s caucus claimed to have held a referendum to remove Basha from his post, but the move was not recognized by the Democratic Party.

The US government imposed sanctions on Berisha last year. In May, US Secretary of State Antony Blinken said that during Berisha’s 2005-2013 tenure as Prime Minister, the politician was embroiled in corrupt acts and used “his power for his own benefit and to enrich his political allies and members of his family â€.

The fight against corruption has been the Achilles heel of post-communist Albania, strongly affecting the democratic, economic and social development of the country. Berisha was the fourth senior Albanian official to be barred from entering the United States due to his alleged involvement in corruption.

Last month, US Deputy Assistant Secretary of State Gabriel Escobar said there would be â€œconsequencesâ€ if the Democratic Party chose a leader Washington had designated as persona non grata.