A Renaissance Man: Millefiore Clarkes looks back on Gerard Clarkes’ life as an artist, philosopher, poet and father

So… what can we do with our destruction… except we sing…

and the infeasible… we dance… and the invisible…

except to see… our future, at… the end?

My father, Gerard Luther Clarkes, painter, composer, poet, Renaissance Man, passed away on May 14, 2022 at the age of 88. An ardent atheist, but a self-proclaimed fellow traveler, he held God in defiance of what he saw as the humiliation of aging. Despite his years, he burned with vitality until the end. He lived in an old Victorian farmhouse at the end of a red dirt road in Belfast, Prince Edward Island. He spent most of his days in a surge of creative expression. Until the day before he died, he worked on his last enterprise: weaving every poem he wrote into one epic yawn. 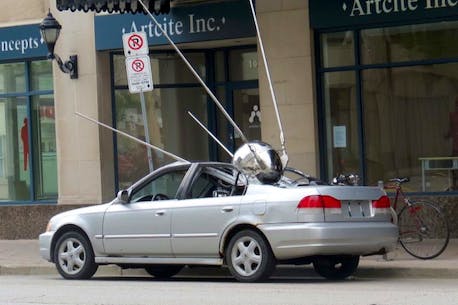 My father was one of the most successful painters in Canada at the height of his career in the 1960s and 1970s. He was represented by top galleries in Toronto, Montreal and Vancouver with many sold-out shows. His paintings are included in many of Canada’s most prestigious collections, including the Montreal Museum of Fine Arts, the Agnes Etherington Art Centre, the Confederation Center of the Arts and Canadian Embassies (most recently in Madrid). He was Artistic Director at York University (c. 1965) and Director of the Burnaby Art Gallery (1975).

Gerard called himself “a poor boy from north Winnipeg”. His father Chester lost his business in depression and suffered a stroke. His mother Pauline held the family together by working in a factory. He was the third of four siblings and led a free, if materially modest, childhood. He was precocious and often skipped school to read philosophy and adventure novels. He attended the Winnipeg School of Art and later earned a degree in Art History from the University of Toronto.

Despite his years, he burned with vitality until the end. . . He spent most of his days in a surge of creative expression.

He lived in the Yorkville and Annex neighborhoods of Toronto for decades, but after my mother died, we moved to rural PEI. There he turned his voracious energy to composing classical music. One of his major compositions, Amerika, is, “at the special request of five of the Czech Republic’s most distinguished composers”, in the collection of the Library of the Czech Music Foundation in Prague. He wrote five symphonies, a stabat mater and hundreds of lieder, a violin concerto and a dozen sonatas for piano and string ensembles.

My father was also a poet. His poetic works include three epic tales titled BeowulFreshtold, Words and Worlds For Leopold and Loeb, and The Imperfect Work of Seven Days. He wrote two screenplays, Liam and Sarah Monteverdi in the Land of Big Bugs (which he later turned into a children’s book) and The Eternal Passion of Amoretta Morningstar. He wrote wise and witty aphorisms daily.

He was constrained by the philosophy of economics and wrote many essays on the subject as a petty socialist. He fervently urged us to bring up the best in our nature, never looking away from the worst.

The first memory of my father was lying in a crib while his mother and sisters sewed and talked. He said he remembered the urge to join in the conversation, but he didn’t know how to speak yet. This desire to communicate, to share his vision of the world, was one of the founding elements of his character. A desire that has never been denied throughout his life.

In the 80s, he began to spend his winters in Mexico, where he took up painting again. He even made two last trips to his beloved Europe: visiting galleries to contemplate the work of the masters. But never without a critical eye.

In the last year of his life, the Confederation Center Art Gallery held a solo retrospective exhibition of his works, published a catalog of his paintings, and staged a concert of his compositions, accompanied by an art lecture animated (as always) by the artist. .

He leaves behind three daughters from different relationships: Pavla, Melissa and myself (Millefiore); as well as four grandchildren: Liam, Emma, ​​Allison and Henry; and his (estranged) wife Suzanne Clarkes. He was predeceased by his wife Rebecca Clarkes.

Millefiore Clarkes made a short documentary about her father the year before his death: The Last Renaissance Man. For more information on Gerard Luther Clarkes, visit www.gerardlutherclarkes.com.