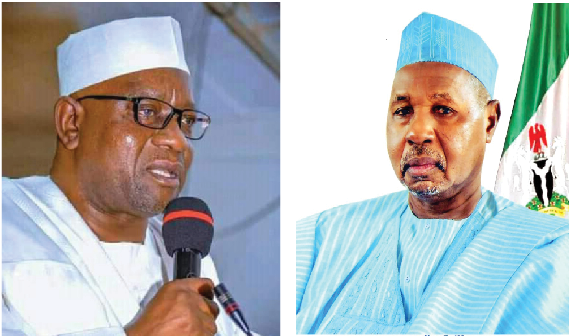 As political parties and their candidates wait for the Independent National Electoral Commission (INEC) to lift the ban on campaigning and begin aggressive politics, the people of Katsina State, especially the allies of Dr Mustapha Muhammad Inuwa, The former secretary of the state government’s (SSG) home is now something of a mecca ahead of the 2023 elections.

Dr Inuwa was one of nine gubernatorial hopefuls in the state, who contested the APC gubernatorial primary and came second in the contest with 442 votes after Dr Umar Dikko Radda who ran received 506 votes to become the APC’s gubernatorial standard bearer.

As the biblical inscription “the stone which the builders rejected has become the chief cornerstone”, the Katsina policy scenario is typical, with Dr. Inuwa seen as the winning factor in the APC in 2023, while other parties who knew of his worth and ability also pressure him to join their tent.

The APC in Katsina state is said to be starting to see the loopholes it has created for allegedly compromising in the guber primary election over mixed sentiments against Inuwa. State political experts are of the opinion that the party already regrets its actions and the choice of the guber candidate.

From recent events in the state, it becomes clear that Dr. Inuwa is the emerging godfather, given the number and caliber of people paying “tribute” to him, all in an effort to gain his support and encourage the electorate to vote for them in 2023.

At present, prominent politicians, party leaders and candidates from nearly every registered political party in the state are visiting his residence and campaign office, each specifically seeking his blessings and support to allow them to emerge victorious at the polls.

Kashim Shettima, the running mate of APC presidential candidate Bola Ahmed Tinubu, who was accompanied by APC guber candidate, visited Inuwa. It was understood that Shettima was in Katsina to reconcile differences and other emerging issues after the primary election.

Also, the Minister of Humanitarian Affairs and Disaster Management, Sadiya Umar Faruk is among the bigwigs who consulted Inuwa. Although what happened has not been made public, political analysts believe it has to do with ongoing issues and APC’s involvement in Katsina.

The New Nigeria Peoples Party (NNPP) guber candidates, Nura Khali and the Accord Party candidate, Muhammad Barau Tanimu along with some senatorial candidates from all parties, visited the former SSG, with the idea to unite with his political experience and myth.

Dr Inuwa, who believes he is unhappy with the outcome of the primary election and Governor Masari’s role in the exercise, seems to bother the APC.

His silence and body language lately is already a threat and a fear for the APC given the caliber of politicians pushing him to join their party. They knew of his political prowess and power and if the former GSU tried to oppose any party in the state, the APC could lose.

Although he did not choose the party ticket, it is a fact that Dr Inuwa has a very strong base of support, a perfect strategy or a lot of wealth and connection to determine which party, or rather candidate(s) ) is (are) inducted to occupy political life. seat(s) in Katsina.

Inuwa’s status and dignity are enough to draw people into his way, and as someone seen as a major playmaker in Katsina politics, this is why presidential and presidential candidates guber, including that of APC, recently honored him. To put it simply, Inuwa became a center of attraction for political gladiators inside and outside the state.

Indeed, he is a brave gentleman, a strong party man, and a capable politician, who in history has understood the politics of the state all too well. He rose from grass to grace to earn the status he now enjoys and was one of those who helped establish a formidable political structure through the ward and local government levels.

Despite his commitment, support and investment in party building, the party state leadership, alongside a few stalwarts, reportedly arranged with Governor Masari to work against his lifelong ambition to occupy the seat of power. number one in the state.

The scheme haunting the plotters has undoubtedly changed the political atmosphere in the state, as APC is watching closely not to lose Inuwa to another party.

Dr Inuwa felt unfairly deprived of the chance to replace the governor and was therefore separated from the party he fought with to form the government in 2015.

Interestingly, his silence over time continued to attract leaders from other parties, inviting him to join their movement and form a new government for a better Katsina state.

Consequently, the recent visit of the main opposition Guber candidate, Senator Yakubu Danmarke Lado, has caused reactions in the state. While PDP members celebrate the visit as a reunion, given the warm welcome they received at Dr Inuwa’s campaign office, ruling APC loyalists are jittery and nervous about losing one of their strongest pillars.

While addressing his many supporters, Senator Lado called on the former statesman, Inuwa, who at times left the PDP to the APC, to “go home” in a bid to save Katsina State from its current challenges.

But, Dr Inuwa in his response said he must consult his political associates inside and outside the state before deciding on his next move.

This development, however, sparked a backlash from APC gubernatorial candidate Dr Radda, who dismissed rumors that Inuwa was leaving the ruling party and claimed the former SSG would never leave the party. for any opposition.

Dr. Radda admitted that Dr. Inuwa has contributed a lot to the development of the APC in the state and the country, therefore, he will not quit the party, especially now that he is about to reap the fruits of his work.

“The PDP was desperate in the upcoming elections, but Inuwa is a loyal APC leader who would never defect to any party, especially now that the general election is closer.

“Inuwa gave us his words to work for the party (APC), as a gentleman, he would not go back on his words.

“The PDP as a party is desperate, they have done more than that before and they still do. The fundamental problem is that we in the APC courted the general population of Katsina to vote for us.

”We told them what the party has done and what the party is doing and people in the state believe in us after seeing our various achievements. As a loyal party man, he will always work by his assurance for the party.

“As a former statesman in our party and as my older brother, this is a period of recovery for him. And I have a lot of respect and esteem for him. He will never leave a party he has been building for over seven and a half years.

“Those who are courting him now, he knows them very well, they have said several things about him and all these past speeches are already public. The PDP will never change and they will remain the same group of people,” the APC candidate guber said.

Experts believe that Inuwa was the engine room of Governor Masari’s government and that leaving the APC at this time considered critical would affect the ruling party’s chances of retaining power in President Muhammadu’s home state. Buhari in 2023.