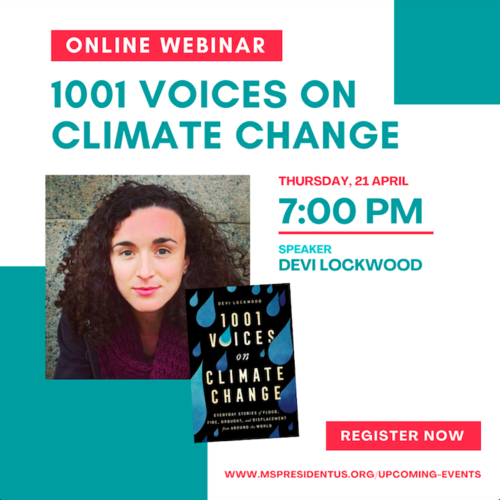 The President of the United States, the Ridgefield League of Women Voters, and the Ridgefield Library are delighted to co-sponsor this program, 1001 voices on climate changedaily stories of floods, fires, drought and displacement around the world.

Devi Lockwood has traveled the world, often by bicycle, collecting first-person accounts of climate change. She frequently carried with her a simple cardboard sign that read, “Tell me a story about climate change.”

For five years, spanning twenty countries on six continents, Lockwood heard from indigenous elders and youth in Fiji and Tuvalu about drought and disappearing coastlines, attended the United Nations climate conference in Morocco and cycled through New Zealand and Australia, interviewing people she met about retreating glaciers, contaminated rivers and forest fires. She traveled through Thailand, Laos and Cambodia to listen to puppeteers and novice Buddhist monks.

From Denmark and Sweden to China, Turkey, the Canadian Arctic and the Peruvian Amazon, she has found that ordinary people sharing their stories do far more to advance understanding and empathy than even statistics and the most alarming studies. This book is a hopeful global listening tour for climate change, channeling the urgency of those who have already glimpsed the future into helping us avoid the worst.